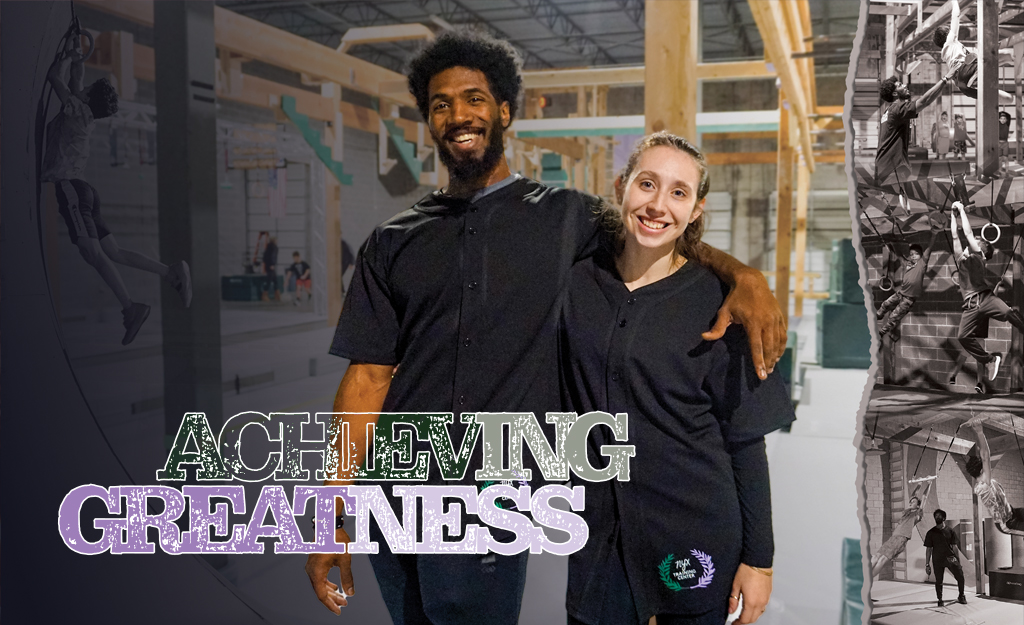 Far from the confetti cannons of NBC’s American Ninja Warrior set in Las Vegas, former competitor Michael Johnson mans the front desk of NYX Training Center in Woodstock. Athletes carrying chalk bags and water bottles check in for classes. Nearby, elite parkour athlete Dara DePaolo studies a white board covered in to-do lists. A green door leading to the gym is propped open, and the sound of metal clinking against wood drifts through the lobby.

Michael, nicknamed “Greatness,” competed for five seasons on the NBC series American Ninja Warrior, which features athletes powering through a variety of grueling athletic challenges. The show has been called an amalgamation of sports, reality programming, and even the circus, for its music and theatrics. 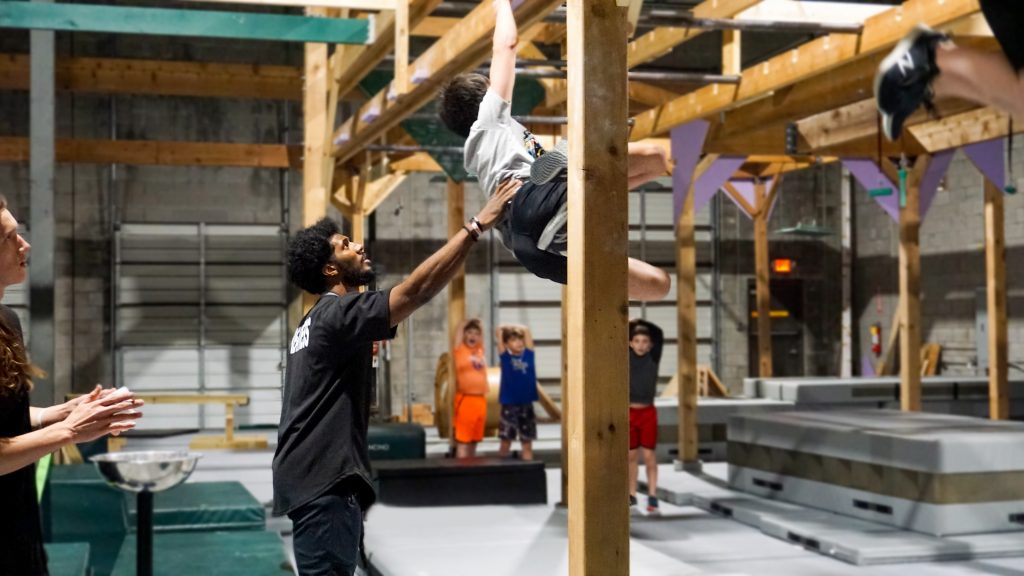 A Labor of Love

The facility is a haven to Michael and Dara, who worked for months to open Cherokee County’s new ninja warrior, parkour, and World Chase Tag training center.

“Opening the gym was a labor of love,” Dara says. “We got a lot of nos before we got a yes, but it’s a home and safe place for Michael and me and all the people who come here. We want everyone to feel welcome and encouraged.” 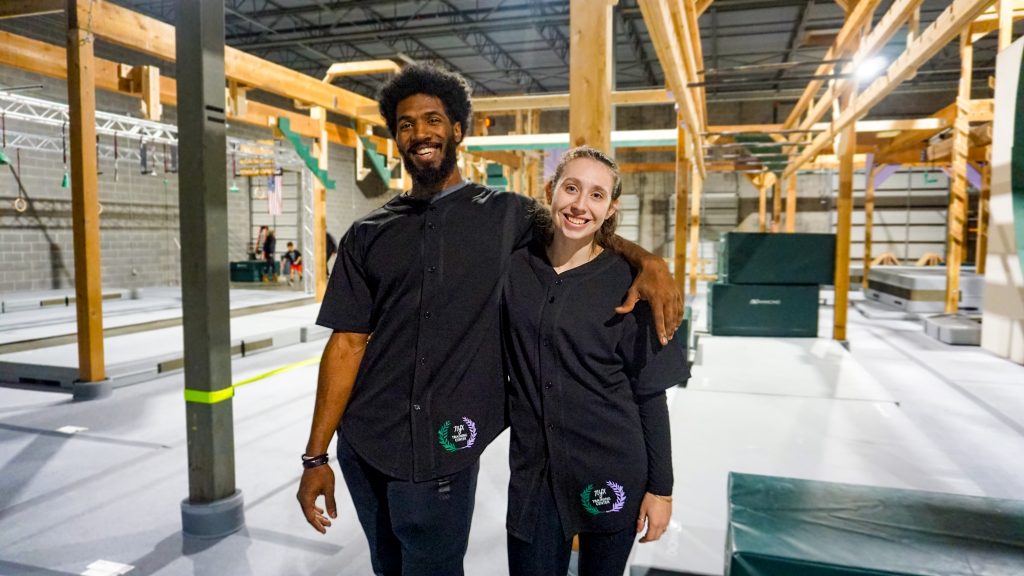 The congruity of working through obstacles to open an obstacle course training facility isn’t lost on Dara or Michael. The two have been overcoming challenges for years. Both athletes moved to Georgia in their early teens from the northeast: Dara from New Jersey and Michael from Brooklyn, New York.

The oldest of seven children, Michael—affectionately called MJ by those who know him well—is a first-generation American who trained and competed in a wide variety of sports growing up. In between, he worked multiple jobs to support his family.

“Being the eldest of seven is heavy,” he says. “You’re the catalyst, the experiment, and the one who has to lead. It forces you to grow up early.”

One of the jobs he worked to help his family stay afloat was at a ninja warrior gym in Canton. Michael says, “In 2016 a friend of mine posted a video on the salmon ladder, and I thought, ‘If he can do it, there’s no reason I can’t,’” A salmon ladder is a structure with one movable rung that athletes carry with them as they ascend as if doing pull-ups, bringing the bar with them as they go along.

After watching Sasuke, the Japanese competition show on which American Ninja Warrior [ANW] is based, Michael practiced with a few obstacles at the gym. He walked out with a new hobby and a job.

“I walked in and was physically bigger than everyone else,” Michael said. “Ryan ran the course, and I thought, ‘I can do this,’ and I got crushed. Absolutely decimated. But as I was leaving, Ryan and Brett were really encouraging. That was the start of my ninja career.”

While Michael was discovering obstacle-course training, Dara was training as a pre-Olympic gymnast, despite financial challenges. “The only reason I was able to train at the level I competed was through the grace of gym owners and my mom, who volunteered at gyms,” Dara said. “They went out of their way to help me, and it made me a better athlete and a better person.” 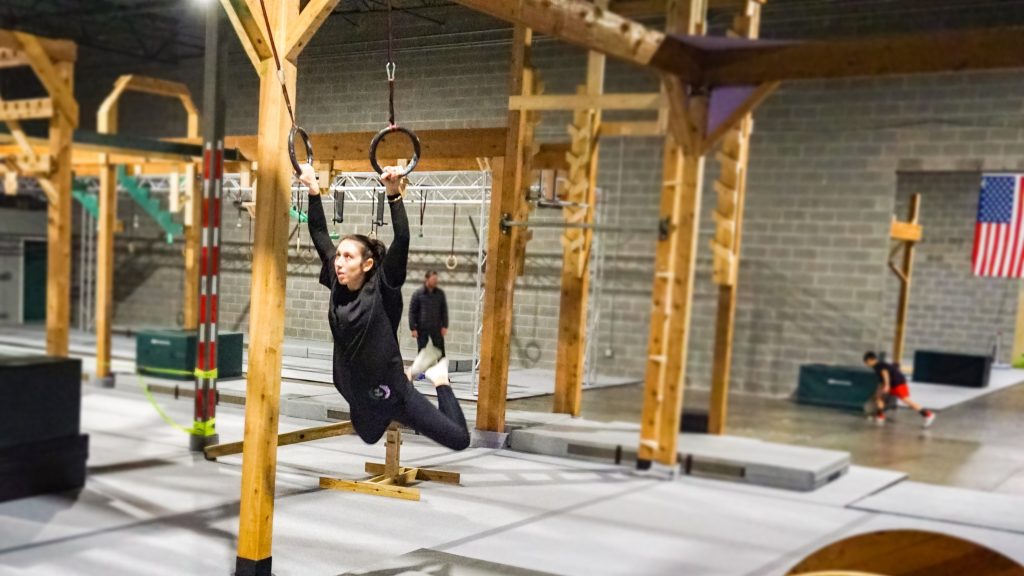 An athlete since childhood, Dara trained as a pre-Olympic gymnast before discovering parkour and ninja warrior training.

After retiring from gymnastics in her late teens, Dara discovered parkour and ninja at the same now-shuttered ninja gym where Michael trained. Dara returned to competition sports and for three years running earned either first or second place in the World Freerunning Parkour Federation USA Cup style division. Dara also coached both disciplines.

“I know what it’s like to come from a competitive sport as a child athlete, and my kids [students] mean the world to me,” Dara said. “To know I’m giving them a safe, healthy, and positive environment to train is incredible.”

In December 2021, after training and coaching together for several years, Dara and Michael learned that one of the only ninja gyms in north metro Atlanta—and their place of employment—was closing. A community of athletes was left without a gym. As nationally sought-after coaches recruited by out-of-state gyms, Dara and Michael could have easily moved on, but they weren’t about to abandon their athletes or the area they now called home.

“In New York there’s a saying: ‘Word is bond,’” Michael says. “I try to instill in the kids I coach that if you say something you have to mean it and back it up with action.” The two therefore tackled a new obstacle: opening a fitness center in the same area to serve the ninja warrior and parkour community and introduce World Chase Tag [WCT], an international championship league for competitive parkour based on the classic game of Tag.

“It [took] months of sitting down and grinding. A lot of people said I was too young to be successful,” Dara says. At just twenty-one, she’s one of the youngest gym owners in the country. “We couldn’t find a building, until out of pure luck we came across one in a great area of Woodstock. We had to get the gym open in a month—no one had built a ninja gym out that fast, but it all just fueled the fire. Failure wasn’t an option.” 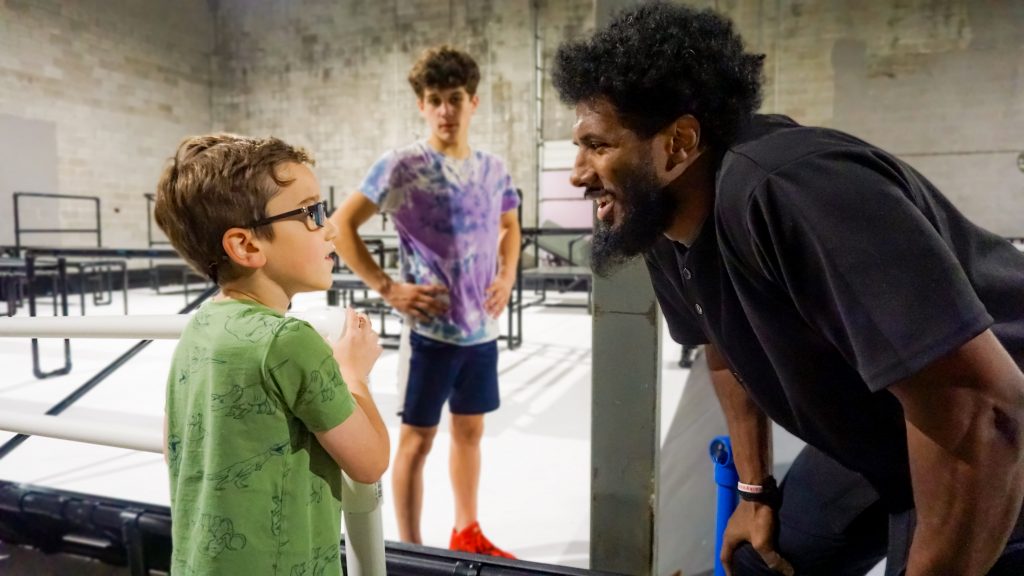 Michael, here with NYX student Angel and junior coach Andrew, has a reputation for kindness, encouragement, and fun.

In September 2022, NYX Training Center opened in Woodstock with adult and youth ninja and parkour classes. The center has since hosted both a World Ninja League competition and the country’s first stand-alone chase tag competition. It has also added the only ESPN-show-standard World Chase Tag quad in the United States. The forty-foot by forty-foot quad strewn with creatively named obstacles is the setting for WCT matches, during which a member of one team earns a point by evading the other team’s chaser for twenty seconds. The Atlanta Talons, a sanctioned WCT team, often train on the quad. The many features and events at NYX Training Center have brought a wealth of out-of-state athletes and their families to the area for multiple weekends.

Dara also competed with one of the first all-female teams in the World Chase Tag USA Championship, which aired on ESPN in November 2022.

Several of the ANW finalists Michael coached are now junior coaches at NYX, bringing their expertise to athletes in Cherokee County. Through it all, coaching on and off the course and quad remains the duo’s priority.

“We believe everyone should have a chance to achieve greatness,” Dara says. “Kindness, honesty, teamwork, and sportsmanship always come first.”

“Your first and biggest obstacle is doubting yourself,” Michael adds. “We want NYX Training Center to be a catalyst for growth and the development of better people. In here, we strive to make great athletes, but even better humans. 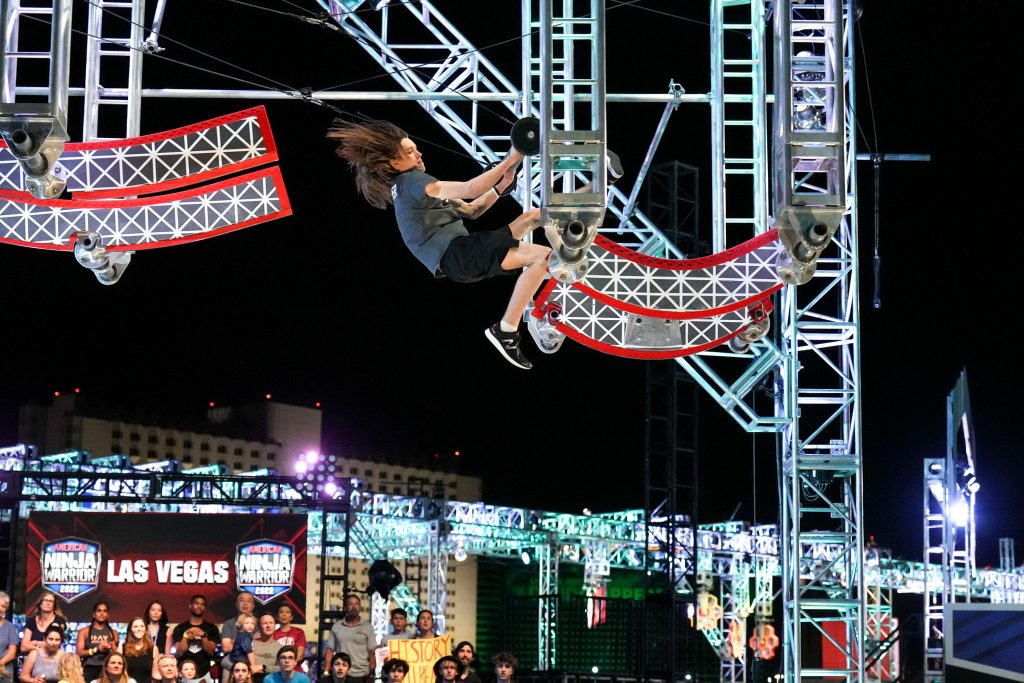 “Michael has been my coach for the majority of my ninja career. When I first started ninja I could do nothing. I couldn’t even do a pullup. Michael got me to the point where I was able to be on the show and do really well. He’s generally regarded in the ninja community as one of the best coaches, if not the best coach, in the sport.

Ninja gives me a pathway to overcome obstacles in my life. I have learning disabilities and sensory-processing disorder, which makes a lot of things really difficult. Ninja has helped me overcome all of those things and help me become a better person.

I think it’s cliché but learning how to beat obstacles in ninja helps you learn how to beat obstacles in real life. My motto is Living Wide. It was made by my dad when he was diagnosed with cancer and given only a few months to live. It means you can’t control the length of your life, but you can control the width of your life. I think living by that motto not only makes your life better but also makes your life longer, because he ended up living several years past when the doctors said he would make it.”

– Christopher Harding-Jones (pictured above), 18, NYX junior coach and ANW season fourteen competitor. Christopher was the only rookie to hit the qualifying and semifinal buzzers during the 2022 season, advancing to the national finals in Las Vegas.

World Chase Tag [WCT], developed in England by brothers Christian and Damian Devaux in 2012, is a professional evasion sport combining parkour and classic schoolyard Tag. Each twenty-second round takes place in a twelve-meter-square arena called a quad and features two competitors: one chaser and one evader. These athletes leap over pipe and platform obstacles with names like “The Mountain” and “The Tilted Cube.” Evaders seek to gain an evasion, or dodge the chaser for the entire round, to score a point.

While many WCT athletes are elite parkour and ninja warrior competitors, the sport also attracts professional football, track, and lacrosse players as well as Hollywood stunt performers. The quad at the NYX Training Center in Woodstock is the first ESPN-show-standard quad in the country, and Atlanta’s professional World Chase Tag team, the Atlanta Talons, often trains at NYX.

NYX co-owner Dara DePaolo recently refereed and competed in the second annual World Chase Tag USA Championship. She’s also the first female owner of a WCT quad and only the second woman to be certified to coach on the quad. “It was a big risk [to install the quad],” Dara says, “but we’ve been able to do things nobody else can do, like host the first U.S. stand-alone chase tag competition.”

Replays of the World Chase Tag USA Championship are available on ESPN and YouTube, and the WCT world championship will be held in Spring 2023. 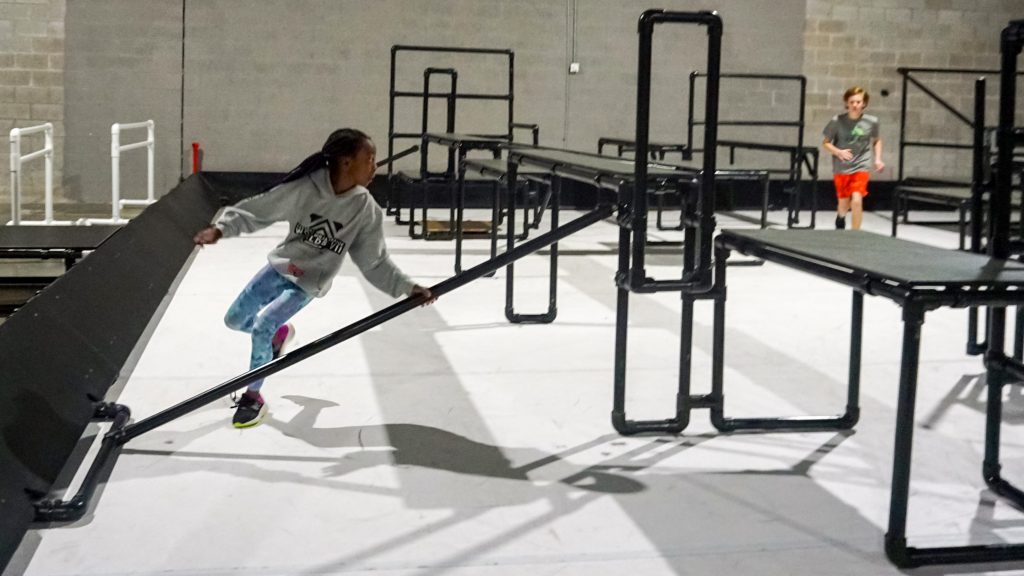 NYX students Mateo and Connor take part in an exciting round of World Chase Tag on the quad.

And the winner is… Bryce Leatherwood

Paddle On with Caleb Guy

Susan Overcash Walker is a freelance writer and former engineer based in Woodstock, where she lives with her husband, two children and very fluffy dog. She has worked as a staff writer and editor, and her short fiction has been published in The Tulane Review, Whiskey Island, Crimewave and other journals.