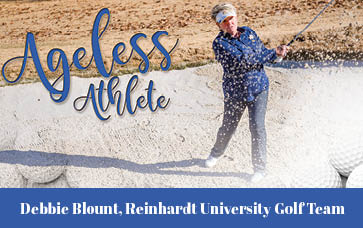 One of the most inspiring athletes in the country lives right here in Georgia. Who comes to mind with that claim? Most likely you were thinking about someone on the national championship Georgia Bulldog football team, or maybe one of the athletes on Atlanta’s many talented professional squads. Doughnuts to dollars you weren’t thinking about college golfer Debbie Blount, but you should be.

Debbie Blount, a college junior with a killer smile and a wicked golf swing, is everything you would expect of a successful college athlete. She is driven, competitive, a team player, and a phenomenal scholar. She’s also getting ready to celebrate her sixty-fourth birthday.

Debbie joined the ranks of incoming freshmen at Waleska’s esteemed Reinhardt University two years ago, at age sixty-two. Her age, though, isn’t the only part of Debbie’s story that is exceptional. She is a starter on the school’s award-winning women’s golf team, which makes her the oldest athlete in collegiate history. 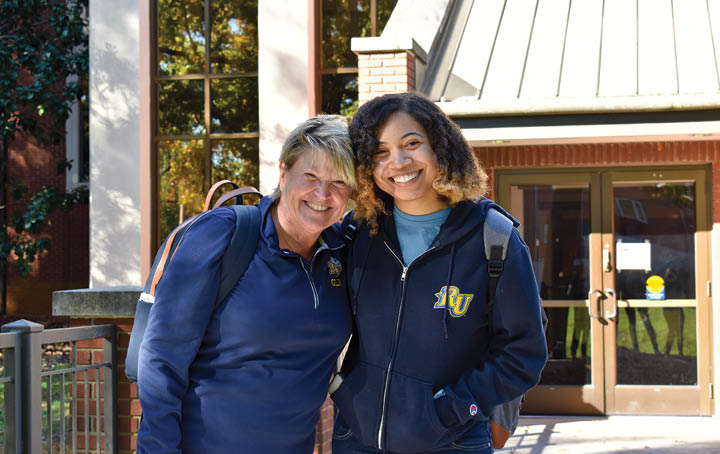 Through hard work, perseverance, and an outstanding work ethic, Debbie’s pinstraight drives and consistent play have helped the Reinhardt Eagles maintain a tradition of excellence, which would be a feat for even young athletes, but Debbie, always humble, sees it as only a way to keep improving her game. As she puts it, “While I was practicing today, my coach kept encouraging me to hit faster, faster, faster. And you know what? I hit a new record for club speed today.”

For many years Debbie thought a college degree wasn’t probable for her, even though a school counselor initially suggested Reinhardt when she graduated from high school in 1976. At the urging of her parents, however, Debbie opted to go the career route. She became a successful X-ray technician, a career she followed for decades. A natural athlete, she also spent thirty-five winters at Vail Ski School in Colorado as an instructor. She also competed in triathlons regularly. As she explains, “Anyone who knows me knows you don’t box this one in.”

She initially took up golf at age thirty-three to spend time with her husband, Ben, and her innate athletic ability shone through even then. She started beating her husband at golf, which inspired her to become competitive. She won several club championships and qualified for two U.S. Senior Amateur Championships. Ben was an avid supporter of his wife’s talent and encouraged her every step of the way.

After a series of personal tragedies—Debbie lost both her husband and her father in rapid succession—Debbie lost some of her passion for the game. While she continued to play, she felt that she was simply going through the motions. She needed an impetus to reignite her love of the game. 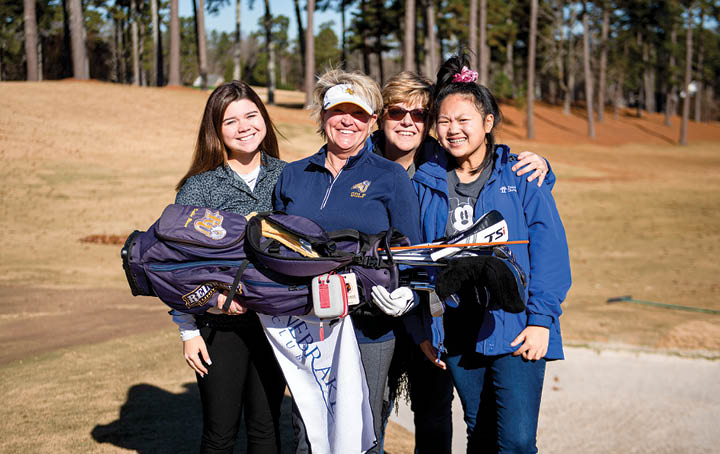 Going back to school gave Debbie the drive she needed. She seemed destined for Reinhardt. It was the only college she thought about after high school, plus in a strange coincidence while paging through old yearbooks, she learned that her mother-in-law worked as a dorm mother at Reinhardt years earlier.

In addition, while Debbie was playing golf with some friends, she struck up a conversation with her young caddy. When she asked him where he played golf, he mentioned Reinhardt. That comment sealed the deal for Debbie. She contacted the golf coach at Reinhardt soon after and was accepted onto the team immediately. With tears in her eyes, she says, “The connection to Reinhardt has been there from the beginning. I feel like it’s where I was meant to be.”

While the idea of starting college at sixty-two was disconcerting, Debbie’s ability and determination made her a success both on and off the golf course. Debbie’s teammates, some four decades her junior, gush about what Debbie has brought to the team. She has proven her worth time after time and serves as a role model for the team’s younger members. Last fall the team finished second, and Debbie was named to the all-tournament team and received her first college golf trophy for finishing in the top six.

Debbie’s life experience, particularly her athletic past, has served her well on the links. She talks about the strenuous walking involved in most tournaments. “The first time we had to walk thirty-six holes in a day, which works out to about fourteen miles … those last few, I hadn’t done that kind of distance in some time. It was interesting how I found myself drawing on some of my previous athletic experience, like the triathlon, where you’re just dying at the end . . . and it allowed me to push forward.”

Debbie’s teammates have jokingly dubbed her “Ancient Eagle,” which, while it is a sly reference to Debbie’s age, has more to do with the life experience and wisdom she brings to her teammates. “The main thing I have loved is bonding with the team. We have really started to gel as a team, and that really has been special.” Her teammates are not the only people who have noticed Debbie’s natural charisma. Debbie seems to make friends wherever she goes, no matter what their age. At a recent conference, a young player walked up to her and simply said, “You’re the coolest person I’ve ever met.” Debbie says she almost cried. “This was coming from a nineteen-year-old!”

While Debbie maintains a 4.0 grade point average and excels on the golf course, she also recently founded the Blount Family Scholarship to help adult learners who may not have the money to follow their collegiate dreams as she has.

Debbie plans to use the skills she has honed in the future too. When asked what she plans to do upon graduation, Debbie says, “At first this was all about completing a bucket list item … getting a degree. But what has come out of this is that I have enjoyed the golf part so much that I’m actually looking at going into the world of coaching. I’m finding that maybe I would have something to offer. I kind of surprised myself.” 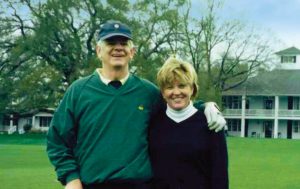 In an era when some people claim the NCAA has become a bloated bureaucracy that seems to have forgotten the true mission of college athletics and the integrity of college sports is at risk, students like Debbie are the standard-bearers for a better version of the college athlete.