Art From The Heart 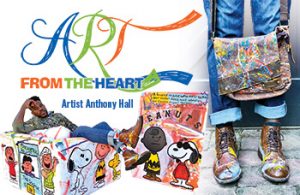 Anthony Hall had every excuse to fail. With a drug-addicted mother and absent father, he grew up in a neighborhood blighted by poverty and crime. The odds were that he would be in jail, on drugs, or dead. But he’s not. A father, husband, life coach, productive member of society, and accomplished abstract artist, Anthony is alive and doing well in Cherokee County. How did he survive his past and thrive in the present?

Anthony says, “God and the people He put in my life revealed a path for me to be saved,” despite the fact that he grew up surrounded by pain and violence.

Anthony’s life began in Hurt Village, a housing project in West Memphis, Tennessee. Michael Oher, the homeless athlete featured in the movie The Blind Side, lived in the same desperate place before a family in the suburbs took him in. Anthony’s mother was on drugs and the street, and his father was unknown, so Anthony’s grandmother raised him, and he referred to her as Mom.

Even the love of Anthony’s grandmother couldn’t protect him from the realities he lived in. As he points out, “It was a place where you are either prey or the predator, and you have to choose from an early age which one you are going to be. I was shot at, robbed at gunpoint, and tied up at that young age. It’s just the way things were for all us kids.” 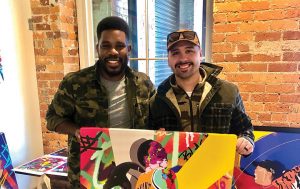 He managed to scrape by unscathed until he was fourteen, when he came to a crossroads. His beloved grandmother died, and Anthony was the one to find her body. She was the only person who had given him real love. Anthony recalls that dark time, “When my grandmother passed, I was dumbfounded. I felt lost. It crushed my world, and I couldn’t eat for two weeks.”

Unwilling to go back to the place where his grandmother died, he asked to live with his uncle in Orange Mound, a slightly better neighborhood.

His new school, Melrose High, offered new opportunities, if Anthony was willing. He joined the football team with its young, dynamic coach, Timothy Thompson. Like a father figure, Timothy took Anthony in, and when Anthony’s living arrangements with his uncle fell through, Timothy set it up for Anthony to live with Gloria Suggs, the mother of another player.

Anthony smiles warmly and his eyes hold a trace of awe, remembering his time at the Suggs  household. “Ms. Suggs was amazing. She would have half the football team over for the night—boys sleeping everywhere in her small house, even on the kitchen floor—and that woman never complained once. She was phenomenal.” Ms. Suggs stepped in and was and still is a mother to Anthony.

Ms. Suggs is a police officer in Memphis, Tennessee, these days. Warmth and pride fill her voice when talking about her “second son,” Anthony. “Sometimes I look back and think, Lord, how did I feed all those boys and have Anthony live with us? But when I was young, my aunt took me in and raised me, and I promised the Lord if I ever saw a child in need of a home and a mother, I would take that child in, because I’m saving someone’s baby.” Ms. Suggs chokes up when she says, “Anthony has been such a blessing to me. He never forgets a birthday or Mother’s day, and he introduces me as his second mom.” 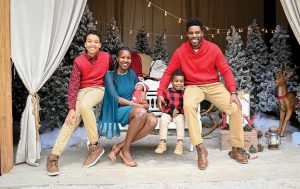 With the stability of the Suggs home, Anthony could concentrate on going to school and playing football. Anthony says Coach Thompson tapped into a hunger in the players on his team. The coach loved and believed in them enough to hold them accountable. “Once we saw players start going from the team onto college on scholarships, we were sold. The team feared and respected him, and he talked to us about God and life before every practice.”

After graduating from Melrose High, Anthony went to Stillman College, where he played football. Anthony graduated with a degree in health and physical education. The first year after college, at twenty-five years old, Anthony worked and coached girls’ basketball at the same school as a friend. Anthony describes a life-changing series of events this way, “My friend was picking me up every day, and he was always playing sermons from his pastor. Before I knew it, I was listening and writing things down. I found out I was hungry for every word of the Gospel.” After a while he began attending church and committed his life to Christ.

The cycle repeated, and when Anthony coached his girls’ basketball team before practice, he talked to the girls about God and life. Anthony poured into the girls everything Timothy Thompson had taught him in high school, sprinkled with his own experience.

After successfully coaching for five years, Anthony decided to pursue a personal passion for acting, and he moved to Atlanta. He found quite a bit of success in stage work and stand-up comedy, but Anthony became concerned about the lifestyle surrounding him in the entertainment industry. Seeing all the glamour, money, alcohol, and trappings of a worldly life, he felt he might fall in his walk with the Lord. Anthony remembers, “I kept hearing myself say that I had come to Atlanta to pursue acting, but I had not left room for what God wanted me to do.” He realized that he had not been walking in God’s will for him. 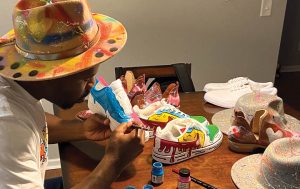 Looking to return to more coaching, Anthony followed up on a mentoring program at First Baptist Church of Woodstock. From there he became a life coach to at-risk young men at Goshen Valley Boys Ranch.

Goshen Valley’s CEO, Zach Blend, shares, “Since the moment I first met Anthony, I’ve been inspired by how he uses his life story to inspire others to overcome their own challenges. Anthony has had a profound effect on a countless number of foster youths, building lasting relationships centered on trust and grace. Anthony embodies the spirit of Goshen Valley.”

Goshen Valley has been a wonderful fit for Anthony. His ability to relate to the pain the boys feel is vital and brings a level of trust that is not easily gained. The healing goes both ways for mentor and mentee when something broken is made whole.

During the COVID-19 quarantine, Anthony worked from home, giving him extra downtime. While browsing online, he saw a type of art that he admired. The muse had come calling. Anthony began playing with painting and using his iPad to create art. He started experimenting with different styles, canvases, and media. Anthony says, “I’ll try anything, and I’m not afraid to fail. I have been through too much to worry about if I mess up a painting.”

Beside this successful man is Anthony’s wife, Monica, a nurse midwife, a woman from Uganda. They met at The Factory Church, where they now attend as a family. Monica and Anthony have three adorable boys. Monica admits to being surprised by her husband’s artistic journey, which is moving swiftly. Anthony’s second painting was featured on the CW network show Legacies, his work hangs in an Atlanta penthouse Airbnb, and he has had pieces up at West Elm furniture store. Monica says it has been amazing to watch the process of Anthony becoming a painter. “It’s just pouring out of him. I think it is filling a need in him he didn’t know was there. Anthony’s art is also opening many doors for us to meet people we would never have met.”

Anthony Hall is a creative person. He has tackled football, acting, stand-up comedy, photography, and now he paints anything that will sit still for him—shoes, sofas, hats, or giant canvases. Does Anthony have any idea where his new passion is going? His answer is, “I have no idea, and I don’t care to know. The Lord is the giver of gifts; it’s my job to try to listen for His will.”

When asked how he feels when painting, Anthony replies, “Free.” For a person born in the grips of poverty and crime, feeling free is quite an accomplishment. He gives the credit and glory to God and all the people who offered him a chance through the years. It’s going to be exciting to see where Anthony’s talents take him next. With his motto, “Let every brush that has paint praise the Lord,” his future looks bright. Anthony’s art is featured at Whole Soul Shop at The Mill on Etowah in Canton. He also has a booth each week at the Marietta Artisan Market.

Leana Conway has been a Cherokee County resident for 22 years. Leana is originally from Canada but calls the South her home now. When she’s not writing about the fascinating neighbors she meets for Enjoy Cherokee Magazine, she’s busy as a full-time caregiver to her husband. Leana is
also a blogger, mom, and new Oma (grandma in Dutch). Her life philosophy is “Find your calling, and you will find joy.”