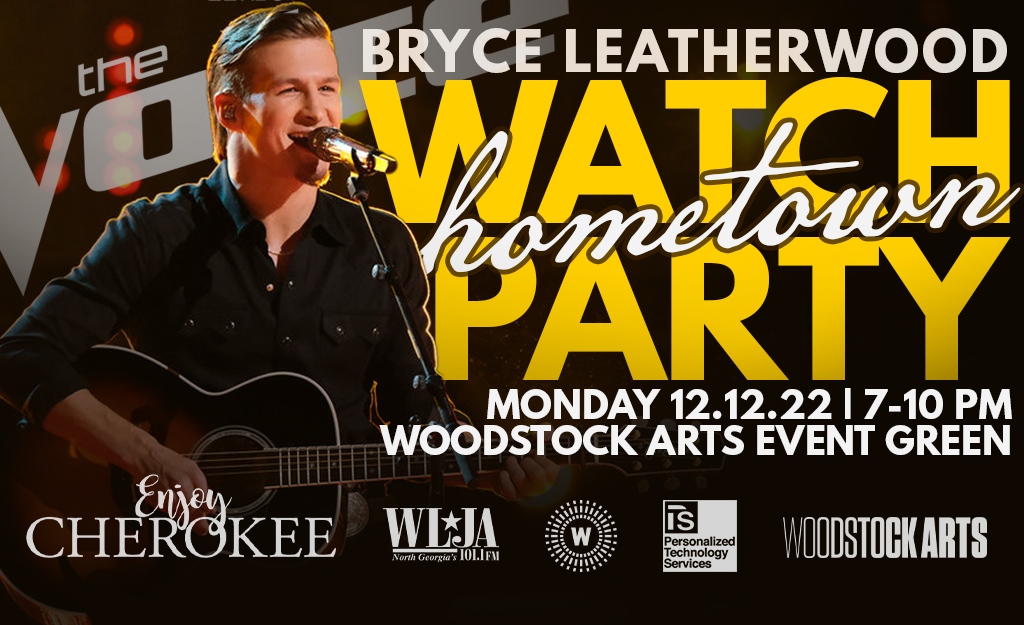 WOODSTOCK, GA (Dec. 9, 2022) – Show some hometown love for Woodstock’s own Bryce Leatherwood as he performs on the season 22 finale of NBC’s The Voice!

Come together at the Woodstock Arts Event Green on Monday, December 12, to watch the live broadcast on the big screen (with a few hundred of your closest friends). Bring a camp chair, settle in on the Green, and review some of Bryce’s fondest moments on the big screen at 7:00 p.m. The live show airs at 8:00 p.m.

On Monday’s performance show, the five finalists—Bryce along with Bodie, Omar Jose Cardona, Brayden Lape, and Morgan Myles—will each perform for a shot at winning America’s votes and being named The Voice’s season 22 winner during Tuesday’s results show.

Be sure to cast your votes for Bryce on The Voice official app, available through Google Play and the App Store, and online at nbc.com/VoiceVote. Plus, follow Bryce on Facebook and Instagram for show updates and behind-the-scenes sneak peeks. Learn more about The Voice at NBC.com.

FREE | RAIN OR SHINE | BRING YOUR OWN CHAIRS & BLANKETS

The Voice Results Show airs on NBC on Tuesday night at 9:00 p.m. The episode features an all-star line-up of musical guests including Kane Brown performing with Blake Shelton, plus Kelly Clarkson, Maluma, OneRepublic, Adam Lambert, BRELAND, and The Voice season 21 winners, Girl Named Tom. All the excitement culminates in host Carson Daly announcing the season 22 champion—and we’ve sure got our fingers crossed for our hometown boy, Bryce Leatherwood!

There is not a planned watch party event for Tuesday.