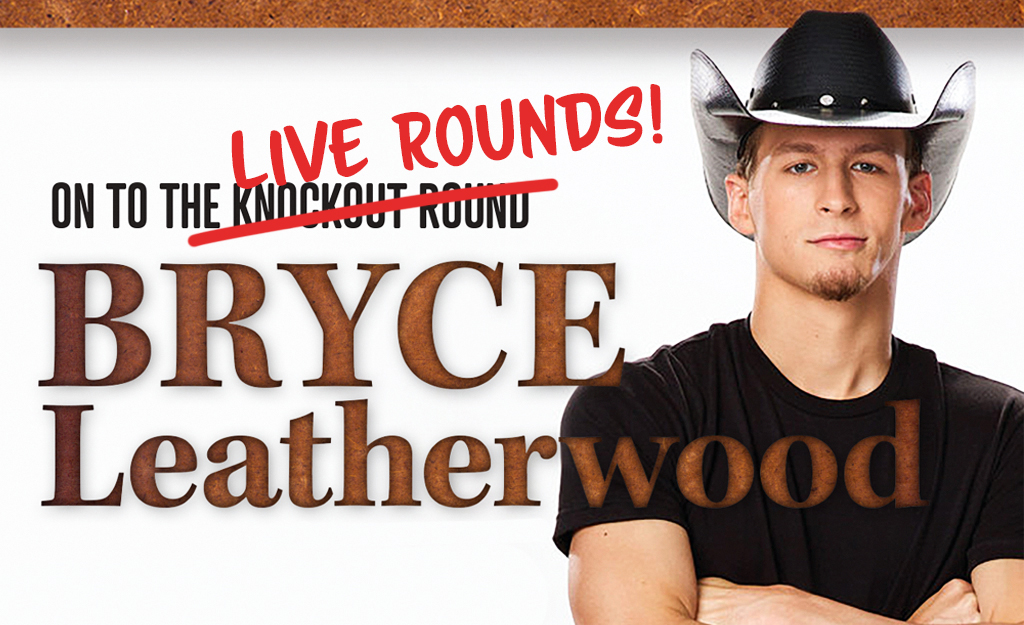 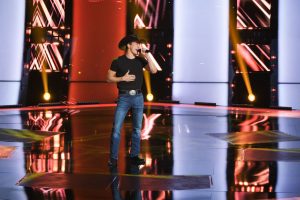 With a “voice like butter,” according to Grammy-winner Gwen Stefani, Woodstock’s Bryce Leatherwood took the stage on NBC’s The Voice and wowed the coaches with his rendition of “Goodbye Time,” a country classic originally recorded by Conway Twitty and later by Blake Shelton, country megastar and The Voice coach for twenty-two seasons. During Bryce’s Blind Audition performance, which aired September 20, Blake was the first of the coaches to turn his revolving red chair towards the stage—a signature of The Voice’s unique format indicating a coach’s interest in the performer. Gwen Stefani and John Legend also turned their chairs during Bryce’s performance, with John later complimenting the richness of Bryce’s voice. Pop star Camila Cabello, new to The Voice coaching panel this season, praised Bryce’s “incredible voice.” On a lighthearted note, Blake Shelton joked, “Has there ever been a countrier name than Leatherwood?”

Journey to The Voice

Bryce’s journey to The Voice stage began more than a year ago, when he first applied to audition for the Emmy-Award-winning vocal competition. Before auditioning, Bryce shared his dream with his parents: to pursue music professionally after years of developing his sound and style as a performer. Feeling that he had the ability, experience, and education to chase his longtime dream, they encouraged him to “go for it.”

Bryce got an early taste of the spotlight in 2012, winning the Dean Rusk Middle School talent show with a performance of Jason Mraz’s “I’m Yours.” The Sequoyah grad continued to hone his talents, and while a student at Georgia Southern University, he sang during an open mic night at Statesboro’s Eagle Creek Brewing Company. Bryce received such a positive reception that he was asked to return the following Friday as a performer. He continued performing patio shows at local venues in the college town, but to be featured on the main stage, he needed a band.

Bryce met Alex Smith at Pladd Dot Music in downtown Statesboro. Alex, who played bass, connected Bryce with guitarist Logan Stephens and drummer Eric Kollars. The quartet formed The Bryce Leatherwood Band and allowed Bryce to focus on being a front man. Alex later left the band, and Jason Kollars stepped in as bassist. Bryce credits his bandmates with supporting his musical journey. “These guys continue to push me and this dream of mine further and further.”

They continued playing gigs in Statesboro and later at venues closer to home, including MadLife Stage and Studios in downtown Woodstock, where the band played its first ticketed show. The sold-out show set a MadLife record for Wednesday-night ticket sales. Bryce recognizes MadLife founders Mike and Kerrie Levi as major supporters of his musical journey.

From Lizella to Los Angeles

With support from his family, girlfriend Lexie, bandmates, and hometown fans, Bryce embarked on the audition process for The Voice. In February, after three rounds of auditions, Bryce excitedly called his parents with the news: “Your son’s being flown to California.”

In a whirlwind month Bryce took his final exam at GSU on May 6, graduated with a bachelor’s degree in business management on May 10, played his first ticketed and sold-out show on May 18, and was on a plane to Los Angeles by May 30.

Backstage with host Carson Daly, proud parents Cliff and Hope watched their son’s audition and cheered as coaches Blake Shelton, Gwen Stefani, and John Legend each turned their chairs for a chance to add Bryce to their teams. After the coaches’ comments, Bryce elected to join country superstar Blake, who noted that Bryce hit “the two tough notes” early in the song and remarked that he has “excellent taste in music.” That taste in music was heavily influenced by his beloved grandfather, Jimmy McCallum.

The Voice introduced Bryce in a video showing him visiting his granddaddy’s farm in Lizella, Georgia, just outside his mother’s hometown of Macon. Bryce spent his summers visiting the family farm, where he was introduced to the music of artists such as George Jones, Travis Tritt, and his granddaddy’s favorite: Conway Twitty. Bryce’s classic country influences were unmistakable during his performance, with many fans online calling him a “young George Strait.”

Battle Rounds and Beyond

During the Battle Rounds, which featured country artist Jimmie Allen as an advisor for Team Blake, competitors perform with another act on their coach’s team, with one advancing to the next round and the other being eliminated from the competition. Partnered with duo The Dryes for a performance of Brooks & Dunn’s hit “Red Dirt Road,” Bryce was faced with a challenge: standing out as a solo act while singing with the country duo. The panel of coaches commended Bryce’s warm vocals and “calm confidence,” with Blake noting that twenty-two-year-old Bryce performed as if he had experience beyond his years. Backstage, an emotional Bryce shared, “I’m just happy Blake saw the light in me,” after Blake declared him the battle winner.

In a surprise move, Blake then used his Save button to keep The Dryes in the competition as well. Both acts will compete in the Knockouts which feature a new twist: three-way Knockout performances. Knockout winners advance to the live shows, which begin on November 14. Fans then vote to keep their favorite performers in the competition with the grand-prize winner receiving a recording contract. The season finale airs Tuesday, December 13 on NBC.

Watch NBC’s The Voice on Monday and Tuesday nights at 8:00 p.m. to cheer for Bryce and vote on The Voice official app available through Google Play and the App Store.

On last night’s episode of The Voice, country crooner Bryce was pitted against two fellow Team Blake performers in the show’s first three-way Knockout rounds: country singer Jay Allen and pop-influenced Kate Kalvach. Bryce was the first of the trio of performers to sing. Before his performance, he spoke of missing home and reminisced on the close relationships he shares with his family, especially dad Cliff. The feeling of missing home was reflected in his song choice, “Colder Weather,” originally by Zac Brown Band. Bryce’s warm tone and assured demeanor made for a subdued but emotional performance.

Following Bryce was Jay Allen, who performed Matt Stell’s “Prayed for You,” and then Kate Kalvach sang “Anyone” by Justin Bieber. Jay’s performance was noticeably affected by what he says were overwhelming emotions at seeing his fiancée in the audience, while Kate’s confident performance was praised by the coaches as her best yet.

When it was time for Blake Shelton to decide a Knockout winner, he commented that he rarely gets to “play a hand” such as this in the competition and in a strategic move declared Bryce as the winner of the Knockout, advancing him to the Live Shows which begin November 14. Kate’s powerful performance was enough to move both John Legend and Camila Cabello to use their sole Steal option to bring her to one of their teams. After John and Camila’s comments, Kate chose to continue in the competition with Team Camila and will perform in the Live Shows as well.

While the winners of the first three rounds of the show are based on the coaches’ choices, the Live Shows mark the first chance for fans to vote for their favorite performers. Show some hometown love and support for Bryce by downloading The Voice app and voting to keep him in the vocal competition each week. The show’s season twenty-two finale airs Tuesday, December 13.