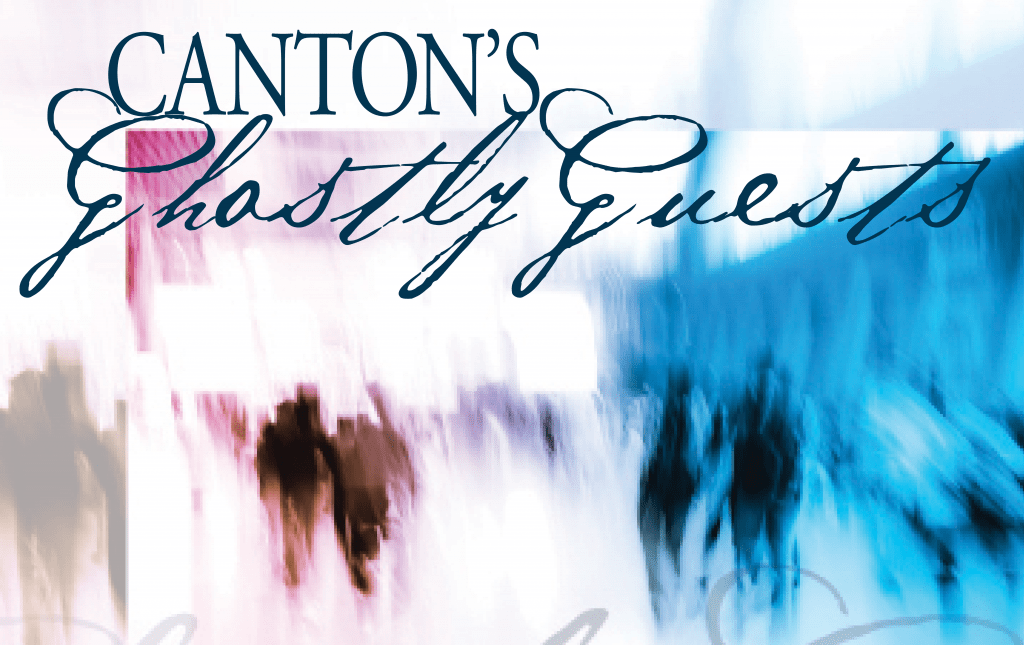 His name is Ted, and he is just one of many resident ghosts who call downtown Canton home.

The owner of the popular ice cream emporium A Cone to Pick is accustomed to encounters with presences others cannot see. From the time the Canton native was a young child, she knew she had a special gift to sense paranormal activity. These days, her Canton Historic Haunts Tour offers participants a chance to look behind the veil with her at some of those apparitions and the history of the buildings they make their home.

Stefanie remembers moving into the business location in downtown Canton. “From the first day of having the key to the place, we have experienced a plethora of unexplainable things. When I originally opened, my daughter was five years old, and I was beyond excited to be able to bring her to work with me, owning my own shop. We set up the neatest area for her with all the toys and comforts a kid would need to occupy her time while at work with mommy. There was only one small problem—she absolutely hated the space.”

The young child would cling to her mother and want to stay where she was working, rather than in the play area. “I finally asked, ‘Why won’t you play?’ She said, ‘That is where Ted lives.’ I just rolled with that. Naturally I tried to hide my expression, but I am sure my face showed some shock.” Stefanie laughs.

Stefanie’s popular ghost and history tours usually sell out, especially in the busy fall week leading up to and around Halloween. Those who take the two-hour tour can learn more about Ted and other haunts as they stroll the streets of Canton.

For Stefanie, who for fourteen years conducted studies of possibly haunted sites with Georgia Paranormal Investigations until the group shut down last year, Ted has become a normal part of her shop. Her shop was home to Yarbrough Grocery Store for many years. A massive fire at Cantex Manufacturing next door in 1955 damaged the building and many others in the area.

“I feel like he has ties to the grocery store. Someone came in the first week we were renovating six years ago. A little lady in her late eighties or early nineties was welcoming us to the neighborhood. Dad and I had been working all day, and she was telling us some of the history of the grocery store and told us her little brother was the milk delivery boy. She left a cake, and I haven’t seen her again since, but I have wondered if her brother might have been Ted,” Stefanie explains.

She remembers a time Ted made his presence felt one evening as she was closing after a very busy night at the shop. She was filling the mop bucket and heard the first sound—a box in the dry storage room moving from its home on the shelf to the floor. This time it was followed by a distinctive male voice saying, “The door, Stef.”

“I tried to figure out what in the world he meant by ‘the door,’ and after a long pause I realized I was about to exit the building without locking the back door. I walked over and clicked the locks in place and replied, ‘Thanks, Ted. See you tomorrow,’” she remembers. “This wasn’t the first time, and it won’t be the last time that things went bump in the night over there.”

Others have sensed Ted as well, she points out.

“Can I confirm a gentleman by the name of Theodore ever roamed those aisles of Yarbrough Brothers Grocery in the 1900s? I cannot. But I can confirm that both staff and customers alike have seen or heard things they chalk up to being paranormal in nature,” she states emphatically. “Nothing malicious or harmful has ever happened, and now that my daughter is almost eleven, she is completely comfortable with all areas of the shop. It becomes a bit of a game with the new hires in the shop. I refrain from talking about the resident ghost, and within a few weeks of training and starting shifts, the newbies will ask me what in the world is going on.”

Reports and a photograph of a paranormal sighting shock and scare tour participants at the other end of Main Street in the turn-of-the-century Archer House, which most recently housed Practically Perfect Day Spa.

Practically Perfect owner Lisa Furilla contacted Stefanie during her first tour season and invited her to come in and undertake an investigation for paranormal activity. Lisa recalled that about midnight on a rainy night while working on renovations shortly before she was set to open, she was knocking on the wall of the shampoo room to find a stud. Suddenly she heard loud knocking that almost shook the house and made the exact pattern she was making. The experience spooked the spa owner, and she headed for home.

Two months later, other strange incidents occurred in the shampoo room. Lights flickered on and off, and once the chandelier suddenly fell from the ceiling, only to stop about three feet from the floor.

The odd occurrences escalated. Through the front door one of the stylists spotted a young girl running across the hall from the shampoo room when the shop was closed. The stylist and her mother unlocked the door, went in, and searched the building, but no one was there.

Lisa told Stefanie in an email, “We had contractors working overnight doing renovations, and one of the contractors was walking down the hallway at about two o’clock in the morning. We had left our baby’s toy piano there earlier that day because we had been doing some work around the salon ourselves. The piano suddenly started playing as the contractor was walking down the hallway that night.”

Another time one of the members of the staff was giving a massage, and while working with her client, felt someone tug her ponytail. The staff member said it was a tug that actually made her head fall back, but when she looked around, no one was there.

The security system then caught a photo of what appears to be an apparition.

Stefanie explains, “The photo we share on the tour was from their security system. No one was in the building, but it detected motion and took the photo. The photo appears to be a female. There had been several reports from clients that they saw a young woman with long dark hair in the mirror [of the shampoo room] standing with the person looking in the mirror. A client also saw her run across the hallway into another room, and motion detectors were set off.”

For Stefanie, paranormal experiences are almost normal in the historic Canton district. “I know that there are more places with activity than there are stops. We cover a dozen stops. Once we meet in the gazebo, we go to the old courthouse and jail, a stop I like quite a lot,” she offers. “The Canton Theatre is another of my favorite stops, both history and haunt-wise.”

The city of Canton has partnered with Canton’s Historic Haunts in the past to have the tour end at the theater for a screening of the movie Hocus Pocus.

Another favorite stop is The Hoagie Shop, where reports of encounters of paranormal activity came from Mike DeLuca when his family owned the shop. “He actually had two different things going on, a young man and a large thing that chased him out of the shop. It was very tall and would encounter him in the basement,” Stefanie remembers. “When they renovated for their anniversary, once they reopened, activity stopped. There was a group of regulars, called Donna’s coffee club, and when one of their favorite members passed away, when Donna came in for the next four weeks, the grill and coffee pot would be on,” in another possible paranormal experience.

“Canton Historic Haunts provides a look into the past two hundred years that have shaped our town, and while we learn about the past, we will also dive into some of the strangest, most fascinating, and downright unexplainable accounts of the spirits that have chosen to make their presence known within the town’s square,” Stefanie expounds.

The guided walking tour through the Downtown Canton Historic District is family-friendly and operates summer through fall.