Carving a Lifetime of Memories 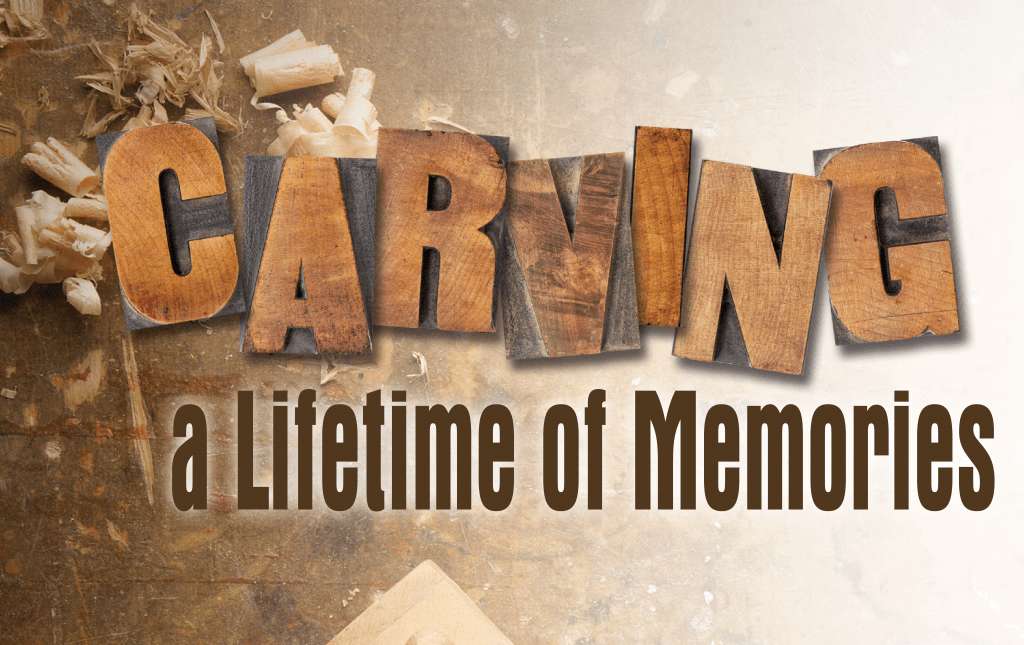 Carving a Lifetime of Memories

Sara and Hines Manous have carved a lifetime of memories together during their sixty-one years of marriage, and memories are not the only thing Hines loves to carve. The talented artist is a master of woodworking. As a student at Canton High years ago, he made a cedar chest in Kleven Boston’s industrial arts class. Hines entered it in the Cherokee County fair and won a blue ribbon. His interest in woodworking never stopped.

Since his retirement in 1999 from the poultry industry in Cherokee County, Hines spends time creating a variety of imaginative yet functional pieces for his family and others. Whether it is a baby cradle, an armoire, a dining table, a hand-carved figurine, or a decorative bowl, each piece is a work of art. “I have to imagine anything I am going to do, and I work toward that end. Once I know the direction I want to go, I put it down on paper and draw it,” Hines explains.

Among his most acclaimed pieces are his snake sticks, eye-catching walking canes. He makes them from a single piece of wood, and they look as though a live snake is climbing along a branch. Hines’s interest in snake sticks was piqued by one his sister created around the time he retired. Since then he has created more than two hundred of these pieces of art, each one unique. While making the snake sticks is time consuming, Hines says it is rewarding. Those who purchase the exceptional creations cherish them for their artistry and beauty.

Hines searches for wood wrapped in a honeysuckle vine that distorted the branch. Hines removes the vine to reveal what will eventually become the snake. “Each one is different. I look at the wood, and whatever I saw there is what I carve. Sometimes I might start by seeing an eye and then carve the rest around that eye. The wood guides me,” Hines explains. He creates the snake’s patterns with various branding tools, adding no colors, “since you can vary the color by increasing and decreasing the heat.”

Sara points out that while the snake sticks are memorable, Hines has created many other pieces of beauty, including much of the furniture in their home in the Avery community. The couple bought the land where they built their home about fifty-seven years ago from long-time Cherokee County Commissioner Trammel Carmichael and have lived there since then.

Among the many functional and decorative pieces of furniture are several tables, a dry sink, a large bread box, and a small kitchen cabinet for the pantry. While Sara says she loves them all, her favorite is the grandfather clock. “Hines made it for me one Christmas, and I didn’t even know he was making it. He started after Thanksgiving,” Sara remembers. “He made the spindles, front, and sides; everything but the works.”

While she treasures the grandfather clock, she loves displaying Hines’s wooden burl bowls. Burl bowls are highly collectible and have a place in American history. A burl is an abnormal growth on the side of a tree that creates a protrusion. The slow-growing irregular bulge can come from a fungus, insects, or stress to the tree. Hines uses mostly oak or maple burls. 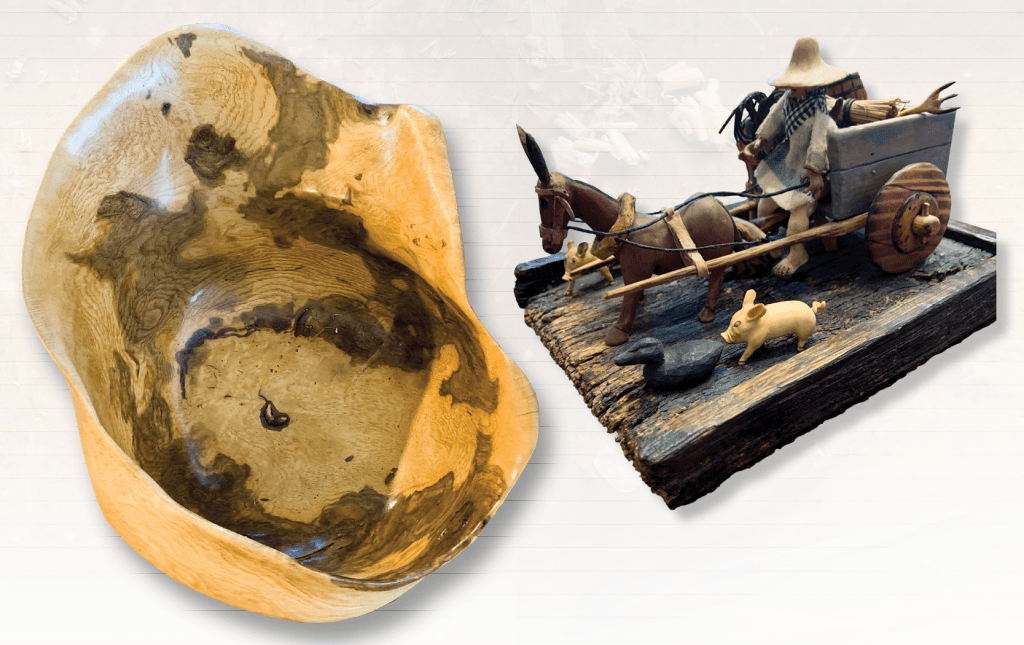 (Pictured left) Hines creates stunning bowls such as this one from burls, abnormal growths on trees, mostly oak or maple. He signs each one.

(Pictured right) Hines carves many decorative figurines, including this vignette of a farmer, his cart, and his animals. The only part of the artwork he did not carve are the leather straps.

Once people recognized the potential of burl wood in the early days of American history, it was made into a variety of bowls and other utilitarian wares. The tricky component of working with burl is that it is dense, and working with it can be difficult. The more varied the patterns in the burl, the harder it is to chisel or lathe.

Hines discovers burls growing in forests and cuts them off the trees. Once again, he lets the wood direct him as to the pattern for the artistic piece. He has made more than twenty, many of which are displayed in his and Sara’s home.

Sara, now eighty-two, and Hines, who is eighty-four, began dating when they were in high school. Sara recalls, “He asked me to go to the junior-senior prom when he was in the eleventh grade. I agreed to go, and we met at Mary Ann Morgan’s house in Canton.” Hines graduated in the last class from Canton High School in 1956 and Sara was in the first graduating class of Cherokee High School in 1957. She is heading up the effort for the class’s sixty-fifth reunion. 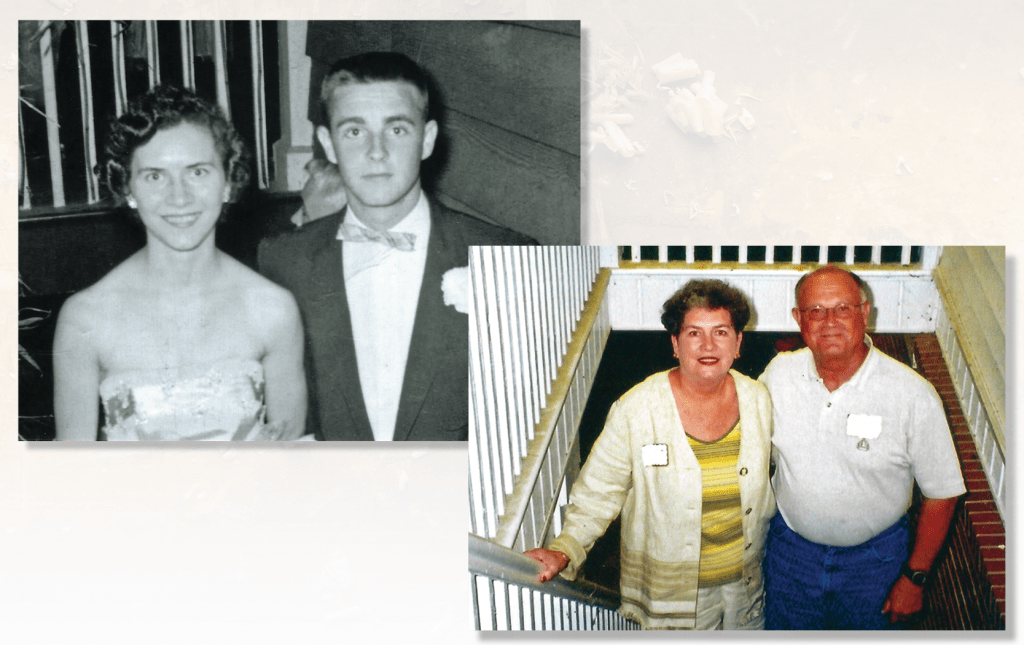 Pictured left) Hines and Sara are pictured here on their first date, which was to Hines’s junior-senior prom for Canton High School in 1956 at the Canton Golf Club. He was in the last graduating class of Canton High.

(Pictured right) Hines and Sara revisit the Canton Golf Club in 2002, scene of their first date in 1956, for Sara’s forty-five-year class reunion. Sara was a member of the first graduating class of the new Cherokee High School.

The couple dated for about five years before they were married. Hines served in the United States Navy during that time. Their wedding took place in 1960 at Macedonia Baptist Church. Sara wore the same wedding dress her sister, Mary Beavers Johnston, wore a year earlier, when she married William “Bill” Johnston from Woodstock. The sisters and their family grew up in Macedonia.

Hines went to work for Central Soya, the poultry plant in Canton, as a service person in the early 1960s. His main responsibility was to visit the chicken growers who supplied Central Soya with their broilers and inspect the chicken houses and chickens.

A service person was really a bit like a chicken doctor, Sara points out. Hines cut open chickens if they were sick to see what was causing the illness. He then gave the chickens their needed medicine to make sure the crops were in good condition. Cherokee County was the broiler capital of the world during the 1950s and 1960s, producing more chickens than any other region in the world.

Sara had a prestigious career with the Bank of Canton, where she went to work in 1958 in bookkeeping and rose to be a vice president at the Free Home branch by the time she retired in 2000. She was the first female loan officer at the local bank in Cherokee County.

Despite some health issues for Hines and the tragic loss of both their children, Sara and Hines continue to carve out a beautiful life together in a house decorated and filled with love.