Cherokee resident Augie Olsen is a first-generation American. He was born in 1943 in Utrecht, Holland, as WWll churned through Europe. Although Holland was initially neutral, Germany invaded Holland in 1940 and sent all local men between eighteen and forty-five to labor at German work camps. The Olsens outwitted the Nazis by hiding their family men in a shelter underneath the house behind a phony wall. The family managed to survive the war, but barely. During the Dutch Hunger Winter of 1944 to 1945, more than twenty thousand people died of hunger in the Netherlands. Augie says his family resorted to crushing tulip bulbs to make a weak soup to survive. 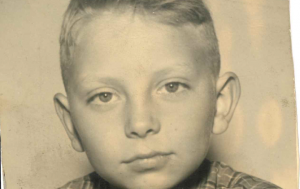 ABOVE: Augie Olsen, age nine, shortly before he and his family emigrated from Holland to the United States.

After the allies liberated Holland in 1945 and the war ended, Augie’s family and all the other families around him were left to rebuild with almost nothing. Then something extraordinary happened: a package arrived. The American humanitarian organization Cooperative for Assistance and Relief Everywhere [CARE] had stocked the package with food, clothing, and even chocolate to help families like the Olsens rebuild after the war. The Olsen family received its package from a family in Pittsburgh, Pennsylvania, with one extra life-changing thing: a raincoat. Pinned to the raincoat was a note that read, “Whoever gets this coat, please get in touch with us. We want to help you and maybe sponsor you to come to America.”

The Dream of America Began for the Olsens

It took seven years, but the Olsen family finally got approval to go to the United States. With the help of their sponsors from Pittsburgh, the family landed in New Jersey near friends of their sponsors who helped get them settled and eventually finalize their citizenship. Augie was ten years old by then, an awkward age made worse by the fact that he spoke only Dutch—but because his parents became citizens, he too was now an American citizen.

Augie says the first years of learning to live in a new culture were challenging, but soon the family adapted and his father found a job. Augie himself quickly learned opportunities abounded in the U.S.A. for those willing to work, and by eleven, he had a gas station job and a paper route. 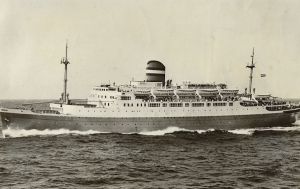 ABOVE: The SS Ryndam was built for the Holland America Line in 1951. Three years later it would serve as the vessel that brought Augie, his family, and many more post-war immigrant families to America.

However, when it came time for college, the family just didn’t have enough money, so Augie enlisted in the U.S. Navy. Always mechanically inclined, he went to submarine school and then electronics school. Augie was stationed at San Diego’s Naval Base Point Loma where he steered submarines at critical times, such as docking or traversing difficult areas. As lead electronics technician, he also learned how to fix typewriters during his time with the Navy.

After seven years in the role of lead electronics technician, Augie retired from the Navy, and with the knowledge gained during his service, he answered an ad at IBM for a typewriter technician. Upon his arrival at the interview, the interviewers asked all kinds of questions about electronics and mechanics but nothing about typewriters. Though Augie impressed the interviewers enough to land the job, he would later learn that IBM had also placed an ad for computer technicians and Augie had arrived at the wrong interview—a fortunate mistake, as the future for computers was much brighter than the future for typewriters.

For the past twenty-seven years Augie has frequented the Taco Mac in Woodstock. A beer enthusiast, Augie takes full advantage of the Taco Mac Brewniversity loyalty program dedicated to the exploration and enjoyment of unique and rare craft beers. He’s proud to say he has achieved the lofty status of Platinum Beer God. Accolades don’t go any higher in the Brewniversity world. Along with this prestigious title comes some great prizes—trips to Oktoberfest in Helen, Georgia, and in Germany; Beerfest in Colorado; and a trip to the east coast to visit The Boston Beer Company, home of Samuel Adams Boston Lager. The loyalty program has also gifted him with items such as clothing, an iPad, and a Yeti cooler. However, Augie has chosen to pay it forward and has given most of his trips and prizes to veterans. Augie’s soft spots are for veterans and dogs.

When asked why veterans are his favorite group to honor, Augie answers, “For one, I was a soldier and have met a lot of veterans and have seen their struggles. I want to help. I can see they need recognition, support, and the knowledge that this country and I are 100 percent behind them. Secondly, I was born during World War II. Allied soldiers saved us. Soldiers from other countries came to Holland to liberate us. It’s amazing that people would do that. Everyone needs to give back. My work with vets and dogs is how I have chosen to give back for my good fortune in life.” 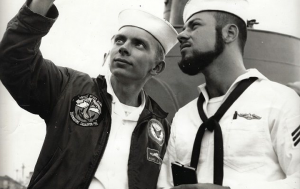 ABOVE: Augie and a fellow sailor aboard the USS Capitaine (SS-336), one of 120 Balao-class submarines commissioned during and after World War II. The USS Capitaine, first launched in 1944, received one battle star for World War II service. In 1957 it was recommissioned and assigned to the Pacific Fleet based at San Diego’s Naval Base Point Loma. It was later reclassified as an Auxiliary Research Submarine until it was finally decommissioned by the U.S. Navy in 1966 and sold to the Italian Navy.

Augie’s connection to Taco Mac and his passion for breweries and fundraisers is how he met Spencer Nix, CEO and cofounder at Reformation Brewery in Woodstock and Canton. Spencer took a shine to Augie and asked him to be a brand ambassador for Reformation. “Ambassadors help us represent the values and vision of our business to the community,” Spencer explains. “We love having brand ambassadors who have stories to share. Reformation’s goal has always been and will always be more than just brewing a well-made beer. It’s about liberating the reformer in all of us, and Augie is a great example. We are privileged to have him.”

As brand ambassador Augie travels to Taco Mac locations and shares his and Reformation Brewery’s stories. Reformation and Augie are made for each other—both have a heart for improving the lives of veterans. Reformation Brewery holds a Veterans Meetup on the first Monday of each month for community, conversation, and beer.

Augie Olsen’s story is one of a successful immigrant embracing the land of freedom and liberty. Though he left destruction and came with nothing to a new land, he has overcome adversity and achieved a level of success which allows him the means to give back. He feels honored to have the opportunity to uplift his country and fellow citizens.

To learn more about Augie’s work as a brand ambassador for Reformation Brewery, click here.