“Courteous and Kind” is the motto of Cherokee County resident and Eagle Scout Andy Meredith. The eldest son of Stephanie and Justin and brother to Kate and Lily leads a busy and fulfilling life. At twenty-two Andy works two jobs, attends Reinhardt University, coaches lacrosse at Woodstock High School, volunteers at a food pantry through his church, and has as many friends as he has dance moves, which are numerous. Oh, and as he likes to say, he may or may not have an extra chromosome.

Each October National Down Syndrome Awareness Month celebrates the abilities and accomplishments of people with Down syndrome, which Andy does indeed have. According to the CDC, Down syndrome affects about one in every seven hundred babies and is the most common chromosomal disorder. While the syndrome itself is common, acceptance and awareness are still evolving. Andy is a prime example of how much people with Down syndrome have to offer. Be prepared to fall in love—Andy often has that effect on people. You may have even already met him, because as little sister Lily says with pride, “My brother is a celebrity around here.” 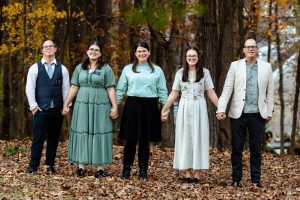 In addition to parents Stephanie and Justin and sisters Kate and Lily, Andy has “adopted” many beloved friends he considers family. Photo Credit/Sariah Luna, Reflections by Luna

A favorite family anecdote revolves around Andy and his very good friend Spencer. Because their birthdays fall close together, Andy decided they are twins. When his father told him they couldn’t be twins because they didn’t share DNA, Andy concocted a “twin plan” to put a strand of his hair in Spencer’s smoothie so that Spencer would get Down syndrome, and they could finally be twins. Stephanie said the sentiment made her happy because “There were days when Andy was younger when things were hard for him, and he wished he didn’t have Down syndrome.” She says it broke her heart. As Andy has gotten older, though, “he has developed more pride in himself and thinks his DNA is pretty cool.”

One activity that helped Andy develop confidence in himself—and brought him a whole team of brothers—is lacrosse. It began with a friendship. Woodstock High School lacrosse coach Pete Manderano, in charge of morning hall duty, got to know Andy as he arrived to school each morning. Eventually their high-fives turned into conversation, and an idea formed in Pete’s head—or more accurately, his heart. Could Andy join his lacrosse team? People assumed Coach Pete was suggesting Andy be a manager or team cheerleader, but Pete was adamant Andy would be an active member of the team. After joining the team with his parents’ blessing, Andy quickly became a beloved teammate. Along with the fact that he dances as soon as any music starts, his natural exuberance and friendliness moved him into the position of captain and won the hearts of the team managers.

On the team Andy became just one of the guys. He got rides home with his friends, stopped for fast food, and hung out with them at their houses. The lacrosse team genuinely loved Andy’s company and the unique personality he brought to the group.

When asked about his relationship with Andy, former teammate Kyle Capozzi says, “Andy has been one of my closest friends since elementary school. I was so excited when I heard he would join the team. Having Andy on the team was one of the best parts about playing. Being a brother to Andy is something I will always cherish.” 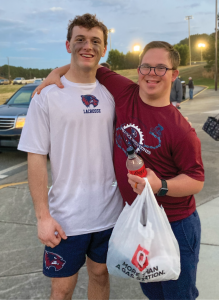 Former teammate Benji Shackelford says he learned about kindness and the value of a positive attitude through his friendship with Andy.

Benji Shackelford, another “lax bro” (lacrosse brother), reflects on what he learned from his teammate Andy. “He taught me to be kind, no matter the circumstance, and the importance of keeping a good attitude. I will always remember riding home from Dalton and watching Andy full of joy.” In Dalton that day, Andy had scored a regulation point, helping propel the Wolverines to victory over the Dalton Catamounts.

What happened for the Woodstock boys’ lacrosse team in the spring of 2019 may not go in the record books for wins and losses, but at the end-of-the-year banquet even casual observers could see and feel something more significant had happened. The brotherhood, love, and teamwork came together as if the team had been sprinkled with pixie dust, and it was obvious that Andy was at the heart of it. With a coach in a wheelchair and a player with Down syndrome, the team represented real inclusion, though nobody thought much about it because it happened so organically.

When Coach Pete reflects on what having Andy join the team meant to him personally, he pauses for a long time, and then his intense brown eyes well up with tears. He chokes up, and finally the tough coach says, “I made a friend.”

From Player to Coach

Andy graduated in May 2019, but Pete and the coaches were not ready to say goodbye, so in 2020 Andy was promoted to coach. Sadly Coach Dennis Conway had to retire that year, as multiple sclerosis and cold are bitter enemies, and the late-night games in the cold had become too tough for him. Coach Conway then gifted Andy the only coaching whistle he had ever used: a crossing guard whistle that belonged to his mother, Clara Conway. Clara, a special-education teacher, would have been thrilled to know that Coach Andy was using her whistle.

As coach, Andy had the challenging job of keeping Coach Pete’s “colorful language” under control. In his passion for the game, Pete occasionally let a few bad words slip, but new coach Andy let it be known that he wouldn’t put up with it, even from his friend and head coach. Alongside Pete and the rest of the coaching staff, Andy helped lead the Wolverines to an impressive 6–2 record for the season.

In 2021 Coach Pete said farewell to the team and moved to River Ridge High School to be closer to his children. While Andy was sad and missed his dear friend, he felt he needed to stay at Woodstock and coach his team. Stephanie says, “Pete Manderano is the example of what it means to be a teacher [and] coach who makes all the difference in a kid’s life. Andy has grown up with many wonderful people in his life, but Pete has gone beyond that, to be a life changer.”

Andy continues to coach the Woodstock Wolverines alongside Mason Wren, who took over head coaching duties and was named Cherokee County’s 2022 Lacrosse Coach of the Year. Mason loves coaching with Andy and says, “Andy is our equilibrium. He has such a pure heart, and he is the first to put his arm around a player’s shoulder when [the player] is upset. Having Andy in my life means everything to me. He puts everything into perspective. Every day he demonstrates that relationships and treating people with love and kindness [are] what matter most in life.” 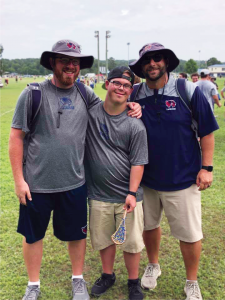 Mason Wren and Pete Manderano went from being Andy’s coaches to Andy’s colleagues when they invited him back after graduation to join the WHS lacrosse team coaching staff.

Talking about Andy brings a big smile to Coach Mason’s face. He laughs as he recalls, “We were having an intense practice before a big game, and we were all feeling the pressure. In the middle of practice, I heard a voice behind me. I turned, and it was Andy playing a prank in a Batman costume, yelling ‘I am Batman. I am vengeance.’” Andy sure knows how to break the tension.

In addition to playing, coaching, and other activities, Andy has worked at Publix since he was seventeen. Stephanie says the whole thing was his idea when one evening Andy was missing when she called him for dinner. He had ridden his bike across a busy street to the grocery store and applied to be a front service clerk. Andy laughs and says, “That seems like a long, long time ago.” He emphasizes he was just a kid then and even explains, “I wore my Batman mask for courage just for the bike ride to Publix.” When his mother tries to tell her version of the story, Andy rolls his eyes and says, “My mom has her thoughts.”

Looking to the Future

This year is a big one for Andy. He is officially a college student, made possible by the Shiloh Cook Scholarship Award from Ruby’s Rainbow, a nonprofit organization that supports adult students with Down syndrome in pursuit of higher education. The scholarship has been applied to Andy’s tuition at Reinhardt University, where Stephanie says the staff impressed the family with their support and encouragement. Dean of Education Dr. Tami Little Smith came to meet Andy and presented him with his scholarship alongside the Cook family. At Reinhardt Andy’s studies will focus on developing his photography skills, including classes on digital editing and photo development. These skills will help Andy advance his photography career and further his independence. 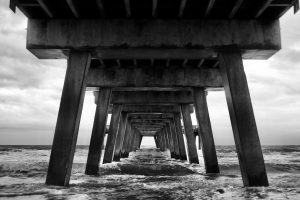 This unique perspective of the Tybee Island Pier has become one of Andy’s most collected photos. Andy’s works are featured online at AndyMeredith.com. Photo Credit/Andy Meredith Photography

Andy’s interest in photography began when he was eight years old. It quickly became clear that Andy had a gift for capturing his unique worldview. Andy and dad Justin, a graphic designer and web developer, began traveling across the United States to capture various landscapes and architecture. Andy has honed his skills so well that he now has a website to sell prints of his photos. Establishing Andy’s photography business is part of the greater plan for Andy to develop independence.

No matter the role Andy is in—son, brother, coach, student, teammate, photographer, or friend—Andy’s influence on those around him is apparent. While education and awareness have brought positive change to the Down syndrome community, much more work needs to be done.

Andy is right: his DNA is cool, and it produced a young man full of love, enthusiasm, humor, and compassion. If you see him around, say hi. He always welcomes new brothers and sisters.

To help raise awareness and funds for the Down syndrome community, the Down Syndrome Association of Atlanta hosts an annual Buddy Walk. This year the 25th Annual Buddy Walk will take place at Kennesaw State University’s Marietta Campus. Visit DS-Stride.org/AtlantaBuddyWalk to learn how you can get involved and support the fundraiser that benefits local programs focused on advocacy and public awareness.