Coach Conway: How He Keeps Rolling 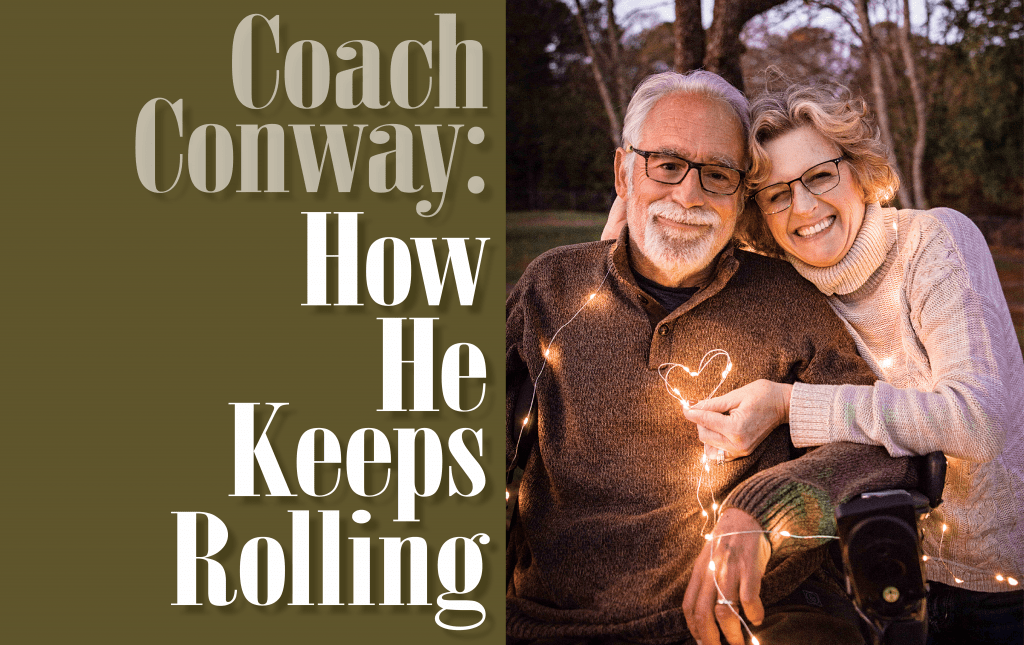 Coach Conway: How He Keeps Rolling

Dennis Conway, a proud Georgia boy, grew up in Rome but has called Cherokee County “Home Sweet Home” for most of his adult life. Dennis says the county deserves its reputation as a place where folks take care of each other. He credits it for keeping him going when his life came apart.

Dennis jokes that in 1998 with the exception that his dog didn’t die, his life turned into a country and western song. Eight years after his being diagnosed with multiple sclerosis, the disease took a turn for the worse and sank its teeth into him. Dennis was forced to use an electric wheelchair and trade his cowboy truck for a handicap minivan. His marriage then fell apart, his mom got cancer, and he had to close the business that was his pride and joy, Camp’s Sporting Goods. The cherry on top of his sundae of misery was his neurologist putting him on an entire course of chemotherapy in an attempt to tear down his immune system in the hopes it would come back stronger. Dennis says he was “bald and broke with a busted heart.”

Dennis reflects, “I wish I could say I never doubted I would make it out of that horribly dark time, but at times I did. What made the difference were friends and my family members who would not let me quit.” The community raised the funds for Dennis’s first handicap van. Friends invited him over for dinners, kept an eye on him, brought him meals, and helped him take care of his daughters when he was sick but had joint custody of them.

All the love and assistance helped Dennis find a new normal. He was reluctantly retired at forty, in a wheelchair, and saw his children only part-time, but his rapid decline slowed. After such a traumatic period no one could have blamed Dennis if he had chosen to live a small life, resting in his recliner and staying close to home because the world is an unfriendly place to the handicapped. However, that lifestyle simply is not who Dennis Conway is. Dennis knew he needed to start being helpful. “I was raised by parents who lived a life of service. Once I was feeling better, I needed to help others. I began by serving on the board for the Anna Crawford Center, a children’s advocacy center. I also organized a Christmas fundraiser for kids in need—the Conway Reindeer Roast and Toy Drive.” He organized the yearly toy drive at his house. His friends helped, and everyone had the name of a child to buy shoes and a toy for.

Around this time, Dennis met his wife-to-be, Leana, a massage therapist hired to work on his frozen and aching muscles. Leana says, “I realized quickly it was far more than his body that was broken. We began a friendship, and although he says he dated me long before I dated him, eventually I couldn’t help but fall in love with this amazing man.”

Dennis still seems surprised when he says, “My life started over when I met my to-be wife, Leana.” With a smile he credits God and the prayer warriors from West Rome Baptist Church. “My mother prayed with her group of prayer warriors at church that someone would come along who loved me enough to marry me and commit to taking care of me. I never thought someone would come along who would, but those women believed and had faith for me.” Together Dennis and Leana blended a family and started a new life.

Part of a partnership, Dennis felt strong enough to return to work in a modified capacity. Dennis says, “I started out by substitute teaching and found out quickly I had an affinity for working with special-education students. Both my mother and my sister taught special education, so it seems to run in the family.”

Dennis found a spot as a paraprofessional in the Severe Behavioral Disorder Room at Woodstock High School. At that time Dennis’s stepson Kyle Teasdale attended the same school and played lacrosse. When the school asked Dennis to help coach, Dennis jumped at the chance to hang out with Kyle and get involved with coaching.

Dennis, who went to college on a football scholarship, says one of the hardest things about having a disability has been that it has slowly stolen his ability to participate in athletics. “When I was growing up, my life revolved around church and sports. The lessons I learned attending and playing gave me the strength to endure life’s tests.” By coaching Dennis had an opportunity to pass those lessons along. Dennis’s favorite quote comes from the most influential coach he ever had, Nick Hyder. “Never. Never. Never. Quit.” 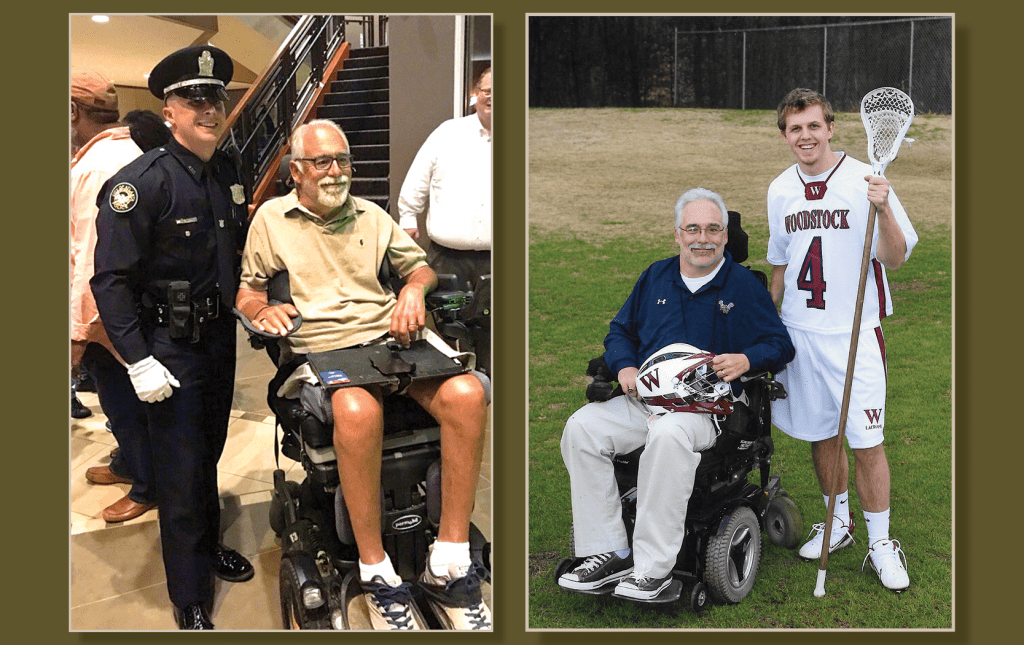 Before coaching lacrosse, however, Dennis had to learn the game. He laughs when he says, “The first lacrosse game I saw, I was coaching. I just kind of watched the other coach out of the corner of my eye and mimicked him.” He fell in love with the fast-paced game in no time. “I cannot say if I added a huge amount of knowledge of the game, but what I did offer was a relationship with these kids. I got to know them all every day at school, and many of them came into my classroom and ate lunch with me.”

Over the ten years Dennis coached the Woodstock lacrosse team, he saw the team double in size, make it to the state playoffs three times, and advance to the Sweet Sixteen and then the Elite Eight. Most importantly, Dennis says, “We coaches were able to watch boys becoming men. We hope we helped guide them to be men of strong character.” He says it was a great ride full of beautiful memories and a few tough ones. When asked for standouts in all the different personalities that came through the program, Dennis laughs again. “It’s like asking who your favorite child is. They all are, for differing reasons.”

Some of Dennis’s former players had great words to say about him as their coach and friend. Reagan Smith, a current City of Atlanta police officer, says, “Coach Conway taught me patience, mental strength, life lessons, and so much more. I would go to Coach for almost everything. He never asked for anything in return. He helped me with my senior project, which was having a fundraiser. We held the event at his beautiful home and raised almost two thousand dollars to donate to the Multiple Sclerosis Society. Coach is a friend, a mentor, a wealth of knowledge, and to me, he’s family.” Reagan continues to visit Dennis and Leana to catch up whenever he gets a chance. 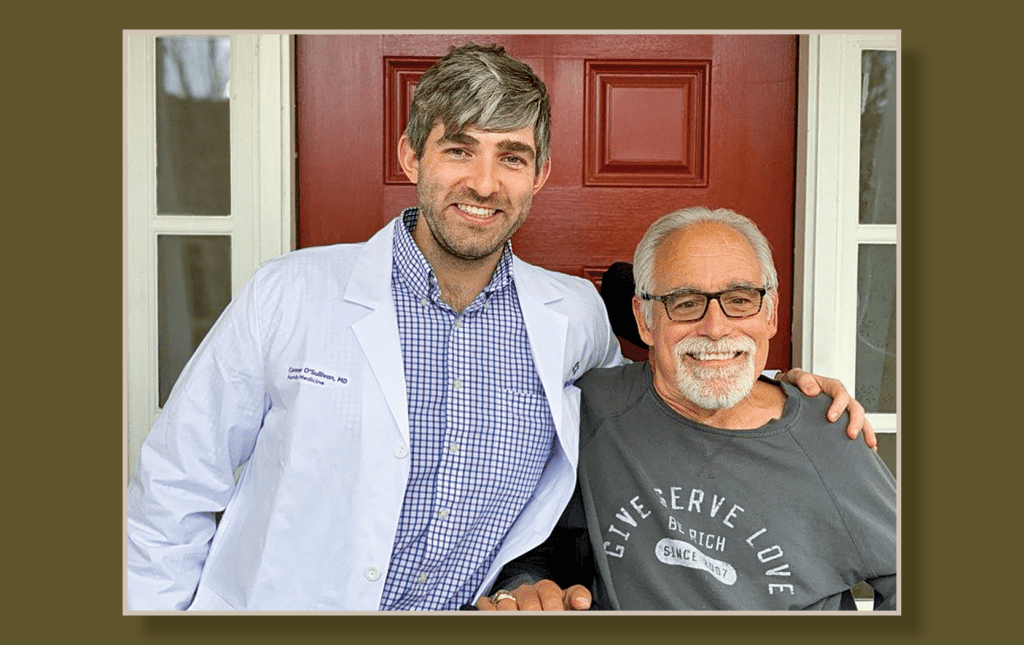 Conor O’Sullivan, M.D., recalls, “Coach Conway was beloved by all us guys who were lucky enough to be on a team with him. Learning about the struggles he had to deal with daily and setbacks we saw him go through was a big motivation for me to go into medicine.”

Like many of the other lacrosse players, Conor spent many of his lunch hours in Dennis’s special-education classroom. The effects of those lunches were felt on many levels. Dennis and the boys were bonding and the players were also exposed to students they would not have met otherwise. Seeing their coach treat with dignity and respect kids who had been separated by society made the players see the kids in a new light. As Conor put it, “The positivity through adversity that Coach Conway demonstrates is something too powerful to be verbally taught.”

Hunter Forbes is another of Dennis’s players who went on to play Division One lacrosse with the Jacksonville University Dolphins. He graduated in four years with an MBA and has a successful career in sports management. Hunter has a close relationship with Dennis, not only as a player but also as an employee. Hunter worked for two summers as Dennis and Leana’s personal assistant, or as Leana calls it, “the house elf.” Hunter did laundry, took Dennis to physical therapy,  and worked at the Fair Trade Coffee stand, Coach’s Corner, that Dennis started at the farmer’s market in Woodstock. He was basically Dennis’s hands and feet.

Hunter says, “For two summers I was with Coach pretty much every day. What stands out in my mind is that I never remember thinking once, “’Oh, Coach is having a bad day’ or ‘Coach must not be feeling good.’ Coach was always the same nice, joking guy everyone knows. There must have been many days when his illness caused pain, tiredness, and frustration, but he didn’t show it.”

When asked to reflect on his life story so far, Dennis says, “Samer Masaad, our lead pastor at Woodstock City Church, told us we must keep the faith during our setbacks. Our setbacks may be the setup for the most important part of our lives. This has been true in my life. All the pain, struggles, and loss have worked together to bring me to my greatest love and my most significant role in furthering the Kingdom of God.”

A note from the author

Dear Readers, you probably noticed I share the same last name as Dennis Conway. Indeed, he is my husband. When I was asked to write this article, Dennis’s biggest worry was that he be made to sound like a much better person than he is. While he is a great inspiration and great guy, he is no saint. I have lived with and taken care of him 24/7 for the last twenty years. There are days when we are very frustrated with each other and days when I have refused to plug in his wheelchair until he smartens up. That said, I know no one else as determined as my husband to do something useful with his life all the while having fun. Dennis has the heart of a lion, and I love him fiercely.