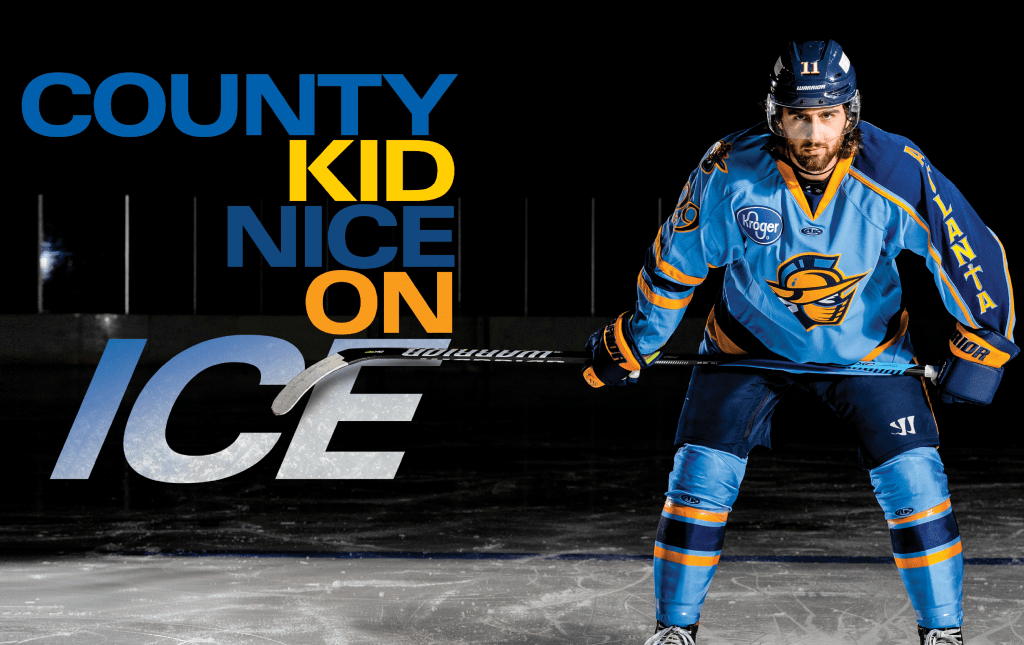 Although football and its star players have traditionally been the “sports love language” of the South, times are changing. Cherokee County can now boast a professional hockey player as one of its notable sports figures. Woodstock High School graduate Zach Yoder signed with the Atlanta Gladiators, a professional minor league ice hockey team based in Duluth.

Atlanta Gladiators President Jerry James, who signed  twenty-seven-year-old Zach and another Atlanta native on July 21 says, “Atlanta is continuing to build on a rich hockey tradition. We could not be more excited to sign two local products with such bright futures.”

Cherokee County’s first professional hockey player had a long, hard journey to get to where he is today. At six feet, five inches, Zach is taller than the average hockey player. He does have hockey hair, though, the kind that blows gently when he glides across the ice. Unfortunately the effect is ruined by those pesky helmet rules. Zach also has a lot of teeth for a hockey player, but he still has time to have a few knocked out. His demeanor is so chill and relaxed that you might think he is a surfer; however, conversations with those close to him reveal the secret to his success is a will of iron.

Nick Bonatucci, a neighbor of the Yoder family and Zach’s coach for his first team, the Flyers, comments, “I witnessed a five-year-old Zach Yoder watch his first hockey game. It was clear the sport and the kid were meant to be together. As the years have gone by, I can honestly say that in the twenty-seven years I have known this young man, only his character and dedication to succeed exceed his athletic prowess.”

Zach says he had a great childhood growing up in Deer Run on a cul-de-sac full of boys, including his little brother, Jacob. Roller hockey games were on more than off.

Zach’s mom, Tish, gave up trying to get her boys to remove their skates when they came in to use the bathroom or get water. Things were broken and paint was scraped, but Tish and Fritz Yoder look back on those years with great fondness. When asked what she thinks as she watches her son whipping around on the ice as an Atlanta Gladiator, Tish replies, “He can skate better backward than most people can walk forward.” She chuckles and adds, “It isn’t that Zach has been the most talented that has gotten him to where he is; it is that he has been the most driven. My son is not perfect; none of my children are, but they are all blessed with a great work ethic and inner drive. There have been a lot of highs and a lot of lows for Zach on this road, but Zach is always all in. All in for his family, and all in for the goals he set for himself.”

Zach says it was the speed that was the real draw of hockey. “I tried pretty much all the sports and loved them all, but going so fast and having to think quickly is what made me focus on hockey.”

Dennis Conway was Zach’s lacrosse coach at Woodstock High School before Zach left the sport because of the demands of his hockey schedule. Dennis says what coaches of other sports would probably have said: “We would have loved to have Zach on our team. He was really good, but he was at a point where he had to choose to play hockey and nothing else. Aside from his talent, we wanted someone with his character on our team—humble and hardworking but a fierce competitor. It’s a rare combination. Plus, his parents let him be his own man. Many parents with talented kids micromanage.”

Ice time in the South is at a premium, so practices and games often take place at insanely early hours. Zach’s family, including his older sister, Sarah, and his younger brother, Jacob, had to get up, load into the family car, and travel all over the place for Zach to play the sport he loved. Jacob, who says he always looked up to his big brother, didn’t mind too much because, “Zach said he was going to play professional hockey, so that was going to happen, and there was no point in fighting all the driving and games.”

Sarah, however, doesn’t mince words and says those times were miserable. She sounds a tiny bit nostalgic, though, as she recounts being squished into the family Suburban, the smell of a stinky hockey bag wafting through the car, riding hours to games before most of the world was awake. She laughs when she says, “Once we got close to the rink, Zach insisted we put on his pump-up music, ‘Cecilia’ by Simon and Garfunkel. Jacob and I call it our PTSD music.” Folk music from the 1970s was an unusual musical choice for a millennial, but Zach played goalie for a long time, and hockey goalies are known for being a different breed.

Zach played on travel hockey teams, but one of his fondest memories comes from winning the state championship with the Woodstock club team with all of his friends. A broad smile spreads across Zach’s face when he talks about that accomplishment. “Winning with the guys you’ve grown up with is special. Plus, being a defenseman, I normally don’t score many goals, but I got to score some goals in those club games. Winning in Cherokee County was awesome. It’s home for me. The effort so many people have put into me from that community helped get me where I am.”

Zach hasn’t always been able to play hockey in Georgia, though. Junior hockey is a level of competitive ice hockey for players between ages sixteen and twenty-one. To play in this league Zach moved to Muskegon, Michigan, where he played for the Muskegon Lumberjacks during his junior and senior high school years and lived with host families. Toward the end of his senior year, Zach sustained an injury that brought him home to graduate from Woodstock High School. After high school Zach spent two years playing for the Janesville Jets in Janesville, Wisconsin. Zach says the Huss family in Muskegon, the Runde family in Janesville, and the Van Zandt family in Janesville played a huge part in his hockey career by welcoming him into their homes and families. After high school Zach played one season at the Air Force Academy before transferring to Ferris State University as a Bulldog, where he graduated with his master’s in business administration.

In 2020 Zach was supposed to be playing with the Toledo Walleye, but the league shut down during the pandemic, so again he returned to Woodstock. A traveling nurse, his sister Sarah was twenty-seven and living in Salt Lake City at the time and was shocked by a breast cancer diagnosis. For the Yoder family hockey suddenly did not seem as important.

When asked if her brothers were supportive during her battle with cancer, Sarah grows emotional and silent for a moment before saying, “My parents and both my brothers were amazing when I was diagnosed. Zach is my more emotional brother and more likely to cry. Zach applied his intense drive to my cancer treatment. He looked at it as a challenge we had to get through together. Both brothers texted and called me, encouraging me during my treatment, saying, ‘Only ten radiation treatments to go,’ and so forth. When I finished all my treatments, the family had a Zoom celebration with champagne. My brothers and I are close.”

Today Sarah’s cancer is in remission. In January the Gladiators will play a game to raise money for cancer research, and Zach will have a sign that says, “I fight for my sister.”

Zach readily acknowledges the tremendous sacrifices the entire family made to make his hockey dreams come true. While thanking his family he pauses and says, “Really, I don’t know how to thank them enough. They sacrificed their time, their weekends, their social life, and a lot of their money. I’m not sure I would let my kids play hockey.” He thinks and then says, “Well, I would have to, wouldn’t I?”

His siblings might think karma would be served if he had male triplets who became hockey stars  one day.

Playing in Atlanta is a dream come true, Zach says. “I am super excited to be able to play where it all started. It’s nice to have my friends, family, and my girlfriend, Jordyn Berger, who have been so supportive of me while I played up North, finally be able to come to games. I used to go to Gladiator games as a kid, and now being able to play for the team I grew up watching is super special to me. I hope to represent Woodstock well.”

By all accounts Zach is sure to make the Cherokee County community proud on and off the ice.

To catch an upcoming Gladiators game, see the schedule here.