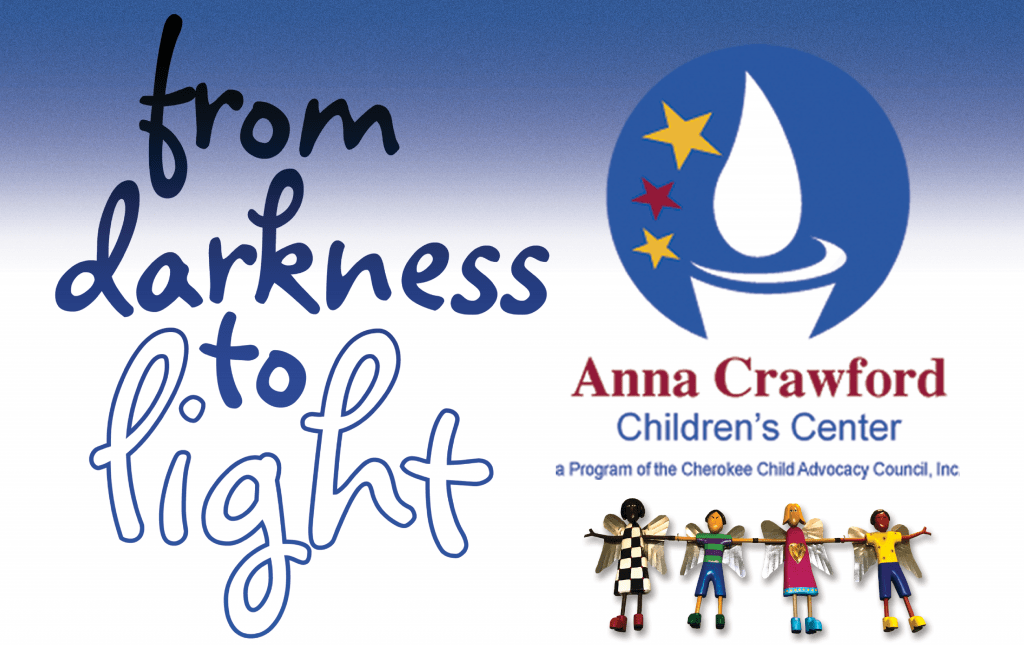 From Darkness to Light

For most people childhood is a time of sweet innocence, when they are blissfully unaware of some of the darker parts of life.

For those people the curtain of reality is gently pulled back as they grow older. From all walks of life, however, some children have their childhood ripped away and are plunged into darkness by physical and sexual abuse. Thank goodness there is help, hope, and healing. In Cherokee County the Anna Crawford Children’s Center has a mission to reclaim abused children and bring them out of their darkness. 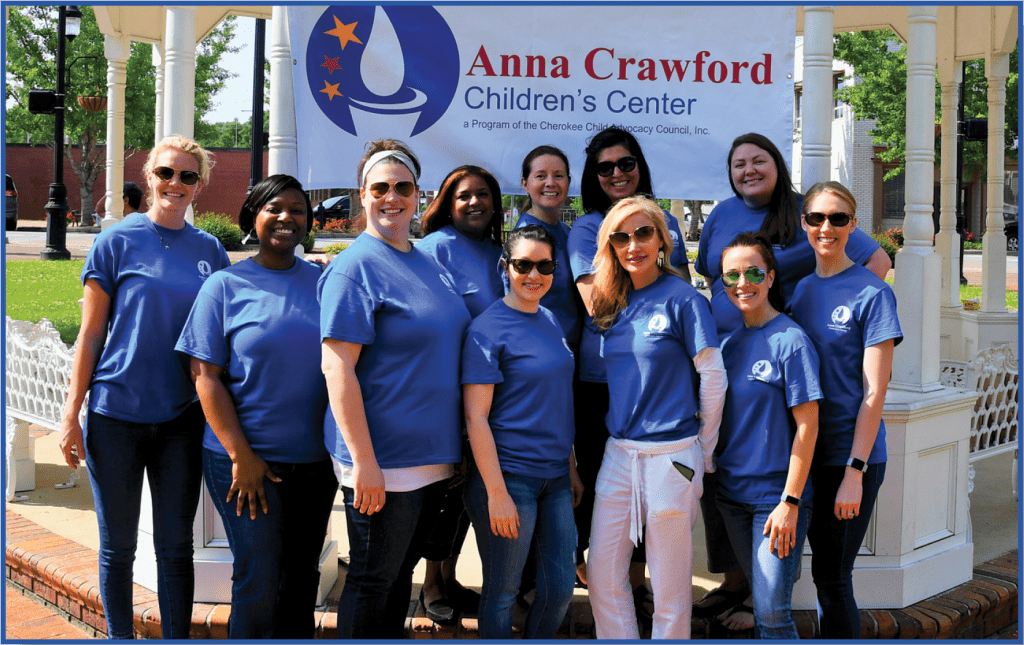 Madison was a typical  happy, bubbly little girl.  She had a splash of freckles across her nose and cheeks, wavy auburn hair, and chocolate-brown eyes. Madison skipped more than walked and seemed utterly carefree. She loved socializing and had lots of sleepovers with her friends.

When Madison was nine her parents noticed she had gotten quieter and spent most of her time in her room alone with the family dog, no longer wanting to visit her friends’ houses. Madison was either at her grandparents’ house or at home. She had always been very close to her grandmother.

Madison’s parents tried to understand why their daughter had changed and asked her repeatedly if something was wrong. Sometimes Madison broke down and cried when her parents expressed concern, but she always said everything was fine. The horrible truth that eventually came to light revealed that Madison was being molested by her grandfather.

Madison was living a nightmare. For the first eight years of her life, her grandfather had been a source of comfort and love, but now their relationship made her feel sad, uncomfortable, and anxious.

Madison’s grandfather found ways to create time alone when she was visiting, and nobody suspected anything. An excellent manipulator, the adult persuaded her not to tell anyone about the touching. He convinced her that if she told anyone, he would get in trouble and it would make Madison’s grandmother sad. Madison loved her grandmother very much and worried about making her unhappy. If Madison were to end her visits with her grandma and grandpa, it would upset everyone too. Being a good girl of only nine years old, Madison tried her best to keep everyone happy.

For two awful years,  Madison kept her secret. The secret was destroying her life, though. It stole her feelings of safety and well-being and confused her about what love and trust were.

Finally unable to bear the burden of her secret anymore, Madison revealed the truth to a sympathetic older cousin, who insisted that her parents be told. After the truth was out, Madison felt concerned about her grandfather and what would happen to him. She also worried that her grandmother would be heartbroken or might no longer love her. Because Madison thought she had caused the unrest in her family, she struggled with feelings of guilt, and a heavy weight of responsibility landed on her young shoulders.

Law enforcement became involved and enlisted the services of the Anna Crawford Children’s Center. At the Anna Crawford Center, Madison was given a forensic interview while a detective and caseworker observed from another room. The center also taped the interview. The record of Madison’s interview eliminated her having to retell her painful and embarrassing story up to fifteen times, which was typical before the advocacy center existed. The Anna Crawford Center was committed to helping Madison and her family pick up the pieces and move forward.

Following the forensic interview, law enforcement continued the criminal investigation, and Madison’s grandfather was arrested and charged. While the criminal case continued through the justice system, the entire family came to the Anna Crawford Children’s Center for therapy every week for more than a year. Madison joined a support group for girls her age who had suffered similar abuse. Her parents also joined a group for non-offending caregivers to learn how to communicate effectively with their children about traumatic experiences. Madison’s parents needed a great deal of support dealing with overwhelming feelings of guilt about what had happened to Madison and fear for her future.

The executive director of the Anna Crawford Center is Amy Economopoulos, MS, LPC, CPCS, NCC. Amy says the best chance of a positive outcome in a child abuse case is when the child has adequate support from the non-offending caregiver or caregivers.

During the investigation of Madison’s grandfather, two other adult relatives came forward to testify that they too had been molested by him. Madison’s grandfather was sentenced to twenty-five years in prison. It took one brave voice to bring forth more victims. For years the grandfather had been grooming young girls and then molesting them, always convincing them to keep their abuse a secret.

Madison worked diligently to reclaim what her grandfather tried to take from her, understanding that the burden and shame she felt were never hers to carry. Madison has now graduated from college and has a fulfilling career in a helping profession.

The Anna Crawford Center was pivotal in helping Madison break the cycle of abuse and partnered with her to turn her pain into purpose. The center opened its doors in 1990 because community members and psychologist Anna Crawford recognized the need to advocate for children who were the victims of abuse. 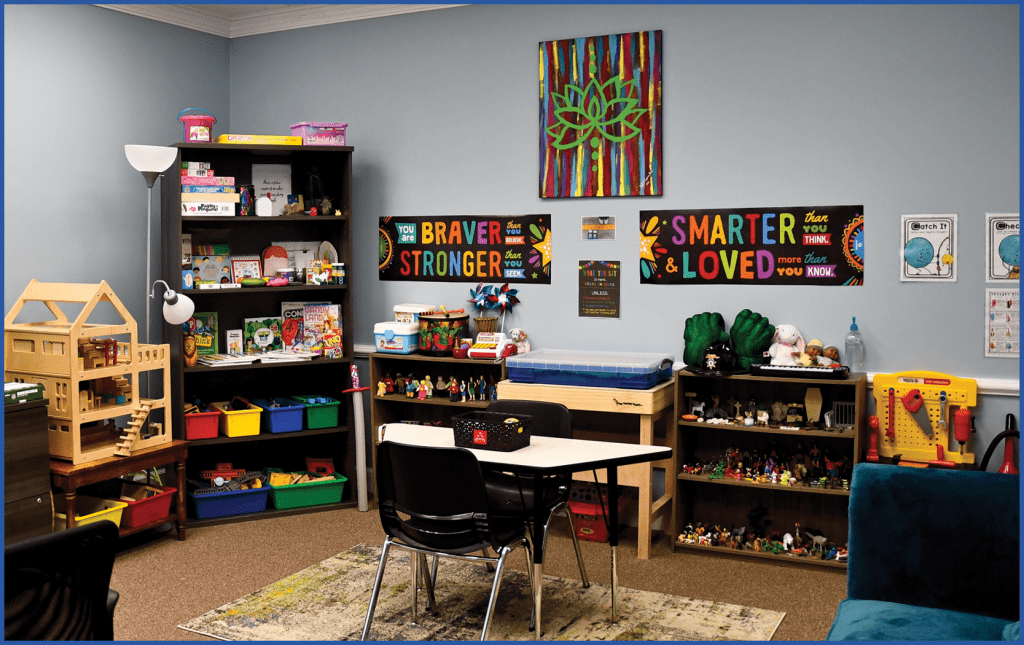 Amy and ten other staff members are mental health therapists, forensic interviewers, family advocates, parent mentors, and educators. Staff members go behind the curtain and deal with things most of us would rather not even speak about. Armed with education and compassion, they walk into a darkness that has no rival: child abuse.

Amy says, “I cannot say enough about the dedication of the staff here. This agency creates a presence in our community that says we support families and combat child abuse. We are here to work with other local agencies, like law enforcement, child protective services, and the district attorney’s office, among others, to intervene in cases of abuse and put children and families on a path to healing. It takes a team of professionals to protect children. We care deeply about this community and about the future of our children.”

When you enter the Anna Crawford Center, the attention to detail conveys the level of compassion of the staff and its many supporters. A warm and friendly environment permeates the building. The space, appropriate for any age, is decorated in soothing colors and calming artwork. The therapists’ rooms are full of paints, craft materials, books, and collections of animal and toy miniatures that invite all ages into the room for closer inspection and play.

A year ago the Anna Crawford Center partnered with Children’s Healthcare of Atlanta and now offers onsite forensic medical exams whenever possible. Onsite exams create a bit of ease on an already distressed caregiver and eliminate the need for a child to go to another unknown location for such a private procedure. Stacked neatly in the shelves of the exam room are cheerful handmade pillowcases stitched by compassionate volunteers. Every child gets to choose which pillowcase they want to use to lie down for their exam. Kermit the Frog, with his friendly familiar face and bendy legs and arms, is available for a child to hold and demonstrate the position the child would be comfortable in during the exam. Children can choose to have their nails painted while being examined or have a book read to them. Small acts of kindness and empowerment distract from the embarrassment and anxiety the child might experience.

Play therapy and support groups are available, but the primary type of therapy the center offers is trauma focused cognitive behavioral therapy, an evidence-based psychotherapy or counseling that addresses the needs of children and adolescents with post-traumatic stress disorder and other difficulties related to traumatic life events.

What does Amy tell victims of abuse who feel they are so broken they will never be whole again? She answers without hesitation, ”You are not broken. Something happened to you that no child is equipped to handle. You survived and did the best you could. Now with many people who want to support you, you can heal and be whole again.”

Next to the yoga mats in the staff room at the center is a board full of affirmations written on sticky notes. One note reads, ”Often it’s the deepest pain which empowers you to grow into your highest self. –Karen Salmansohn.” 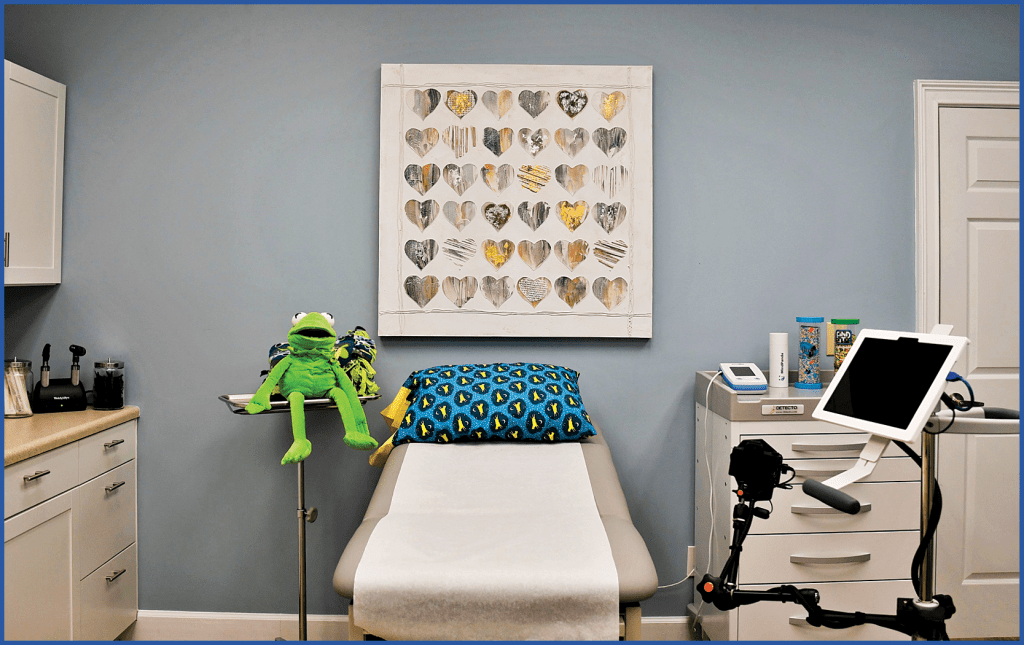 Although the days are dark for any child arriving at the Anna Crawford Center, the staff that believes strongly in the resiliency of the human spirit offers hope for a brighter future.

Note: some names have been changed to protect the privacy of individuals in this story.