From Paralyzed Pup to Able Ambassador 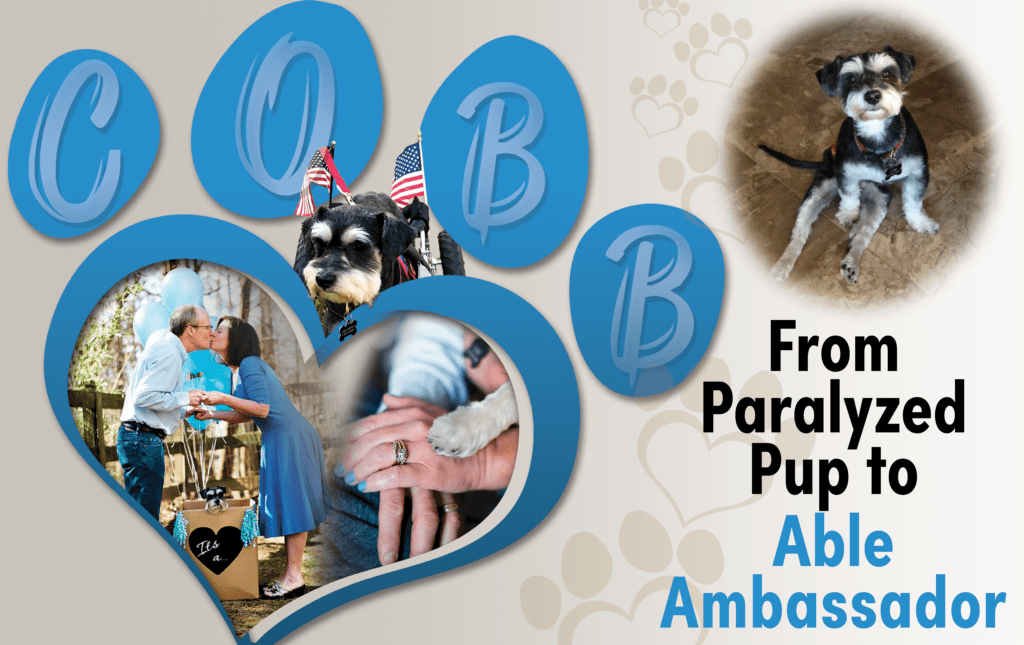 A good Samaritan stopped her car and scooped up a wet and matted pup dragging himself across South Cobb Drive. In the early morning hours of the stormy July day, she took him to the Cobb County Animal Shelter.

The animal had been badly hurt; his hind legs were limp. He had no collar, tag, or microchip. The poor pup had obviously survived an accident, and he was all alone in the world. The good-natured boy resembled a schnauzer, so someone from the shelter called a local schnauzer rescue to see if it wanted to assume responsibility for the pup. If not, the shelter would have to euthanize the wounded canine.

For the better part of the past fifteen years, my husband and I have been owned by miniature schnauzers, so I naturally follow many schnauzer pages on social media, particularly a rescue called Schnauzer Love Rescue. In late July 2017 I saw that a severely injured little guy had been taken in after narrowly missing a date with euthanasia. The rescue folks had put him through intensive rehab to see if he could recover enough to be adopted and have a good quality of life. 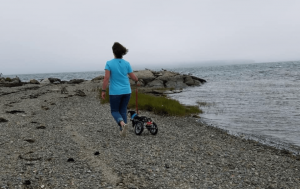 For his medical records and treatment, the pup needed a name and birthdate. He had been found on South Cobb Drive in Cobb County, Georgia, so someone along the way decided to call him Cobb. He was assigned the birthdate of March 10, 2016, because his initial veterinarians estimated him to be about a year old.

As I read through his posting on the rescue site, I recognized myself in that little guy. In 2012 I suffered spinal cord compression after a disc in my neck ruptured. It would be impossible to describe the type and amount of pain I suffered, including the pain of recovery after surgery. At that time I believed my life as I had known it was over.

Thankfully I am much better now and deal only with occasional aftereffects of having had my spine altered from surgery. I wondered if that little dog was feeling anything like I had felt. Inexplicably drawn to him, I reached out to his foster family to find out more. Before the conversation ended, I had set a time the next day to meet him. All I needed to do was convince my husband, Paul, that we were only going to meet the little guy and nothing more. To my surprise he readily agreed.

At the appointed time the next day, we met the couple fostering Cobb. The veterinary neurologist had given the furry baby strict orders for limited movement, so he was in a pen in the living room. The couple invited us to get in the pen if we wished, and Paul hopped in. Despite Cobb’s injuries, the pup happily climbed all over Paul.

I discussed with my husband the idea of becoming canine foster parents. Surprising me once again, he agreed that we should offer our help to Cobb’s foster mom, who eagerly agreed to the idea. In August we began fostering Cobb part-time, and by the time December rolled around, he was with us full time and even traveled with us in our motorhome.

The longer Cobb was with us, the more I wondered if anyone would ever have any interest in adopting him. At the same time, I worried that someone might want to do it, and that thought terrified me. Cobb had become a natural part of our lives and our family, and I could not imagine life without him. As a nurse for many years, I was also comfortable caring for Cobb’s many medical needs, including emptying his bladder, which he cannot do on his own. 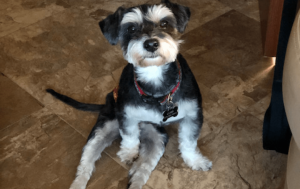 By the time the holidays arrived, there was no denying that Cobb belonged with us. He completely owned our hearts. While I was waiting on our adoption application to be approved, I arranged a photo shoot with a local photographer. We did a “Cobb reveal,” with him poking his little head out of a box with blue balloons. We sent the photos to family and friends as adoption announcements. We also had an adoption ceremony and pet blessing and invited all of our family members and friends to attend. It was a beautiful day.

That night was the first time Cobb ever initiated play with our other two dogs. Watching, I was so astonished that it moved me to tears. I was convinced that once we announced his adoption, he knew he was truly home, where he would always be loved and cared for.

Not long after we adopted Cobb, he starred in a commercial, a collaboration between Sam’s Club and The Today Show for National Pet Adoption Month. We were chosen based on an essay I entered telling the story of Cobb’s rescue and success story. After the commercial aired, people viewing the rescue page paid a great deal of attention to Cobb, which meant the dogs that still needed homes were getting less attention.

I decided to start social media pages specifically for him and titled them “Cobb’s Purpose,” because I believed he had a mighty one. He has since also been featured on a television show called To the Rescue, set to air this winter.

Between all our travels across the country and Cobb’s newfound celebrity status, our sweet baby was gathering more and more fans on his social media sites. We made it a point to tell his fans when we were in their towns so they could meet him. On one visit to Florida, the wife of one of Cobb’s longest followers and I connected. She told me that her husband, a hospice patient, would be thrilled to meet Cobb. She also asked if I thought Cobb might snuggle with her husband. I said a silent prayer and told her I thought that he would. On the way to visit the husband, I told Cobb what a special visit he was about to have and that he needed to be on his best, most gentle behavior. The look in his eyes told me he understood. When we arrived and I placed Cobb in the man’s bed, it was as if he was meant to be there. I knew then that Cobb had a purpose that even I hadn’t realized.

That visit made me see that as a pet-therapy dog, Cobb had great potential to help others. We completed one course, but further classes have been postponed for now, because of the pandemic. 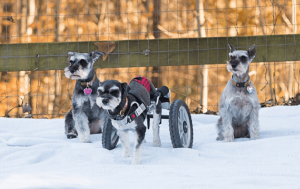 Always curious about Cobb’s unknown past, I sent for a DNA test kit to discover any unknown medical issues. Imagine my astonishment when the most shocking thing about the results was not his medical traits, but his breed. It turned out that Cobb, rescued by Schnauzer Love Rescue, was not a schnauzer at all. He was a Hava-poo, an equal mix of Havanese and poodle. It took me a few days to absorb this information, and I didn’t even post it on his social media pages for several days. I wondered how his fans, many from other schnauzer sites, were going to take the news.

When I finally posted the results, the reactions were mixed. Some people were as surprised as me yet happily accepted Cobb’s newfound identity. A few others were angered. A few fans said, “Just leave him a schnauzer,” and others pleaded, “Please don’t change the name of his pages.” In the end, though, I couldn’t leave things as they were. Cobb was not a schnauzer, but more importantly, he was still the same pup that my husband, Cobb’s fans, and I had fallen in love with. He was the embodiment of unconditional love, and that fact will never change.

Cobb has been a cherished member of our family for three and a half years, and we can’t remember our lives without him.

My husband likes to say, “Dogs are only with us for a short time, on loan from God.” We thank God every day for the gift of Cobb. Because of his paralysis and a few related medical issues, though, we are not sure if he will have the lifespan of a normal, able-bodied dog of his size. We just know he wakes up with pure joy every morning and goes to bed every night knowing he is loved beyond measure.

A nurse by profession, Joni has always enjoyed writing. Joni is a mother and grandmother and resides in Holly Springs with her husband and three dogs. Through the years she has done freelance work for various local and national publications, including Newsmax. She is currently working on Cobb’s memoir.