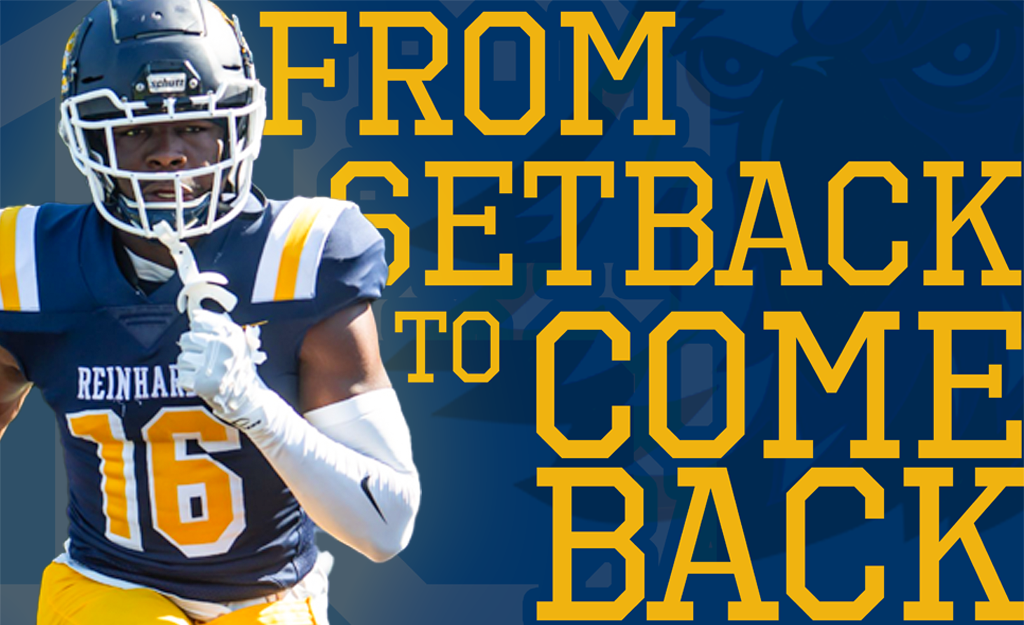 Imagine football is your life.

You’ve been playing from the time you were five years old all the way through high school and even into college on a scholarship, and then—one day, one practice, one play—pop! You hit the ground. 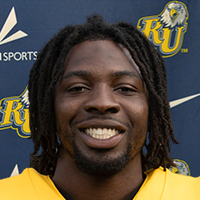 That scenario was reality for Reinhardt University defensive back Chris Long. Originally from South Carolina, Chris now makes his home in Woodstock with his parents and sister. The former River Ridge defensive back, quarterback, and track star is a senior at Reinhardt in pursuit of his MBA.

In the spring of Chris’s freshman year, his confidence was up and, as he says, his juices were flowing. During a set of competition drills at practice, he baited the quarterback to throw the ball deep to a tight end. As Chris tracked the ball, he leapt into the air.

“As I jumped I heard a pop and hit the ground. My hamstring started firing and the back of my leg was hurting, and I was rolling around on the ground. I thought that I just hyperextended my leg.” Chris recalls.

The team trainer told him he needed to see a doctor, who ultimately diagnosed Chris with a torn anterior cruciate ligament [ACL]. “And that was it.” Chris sighs.

According to the Orthopedic Institute for Sports Medicine at Northside Hospital, an ACL injury is the overstretching or tearing of the ACL in the knee. Patients who experience ACL tears often report hearing a popping sound at the moment of injury followed by knee swelling and pain, especially when bearing weight on the injured leg. For an ACL injury, the Northside sports medicine team recommends avoiding sports and other activities until you can be evaluated by a physician.

While ice, over-the-counter pain relievers, crutches, and therapy are early treatment options, ACL injuries often require surgery, as unrepaired tears can result in further damage to the knee. This fact is especially true for athletes determined to return to sports with the same intensity and love of the game as before.

Ashley Wolary, Reinhardt University’s assistant athletic director of Sports Medicine, remembers Chris during his recovery and rehabilitation period as being a quiet young man dedicated to playing football. “He was obviously upset by the injury because it meant he would be out for the next season,” she says, “but he was determined to return to the field.”

Chris Long, former River Ridge defensive back, sustained a debilitating injury during practice with the Reinhardt Eagles in his freshman year. His dedication to recovery helped earn his place back on the team a year later.

Chris recollects on his first day of therapy following surgery to repair his ACL. “I could barely walk, so they started me off with light weights, walking to retrain my legs to function properly and perform simple movements.” After a month or two, Chris progressed to more advanced exercises with heavier weights and increased leg movements before moving on to sport-specific exercises, including jogging and eventually running. “If you can’t do it, the therapists will make the adjustments so that you can, such as using lighter weights or fewer repetitions and sets. That process was definitely challenging, but it made me stronger as an athlete as well as a human being, knowing I overcame that obstacle.” With a light laugh, Chris says therapy was “the easy part.” He explains further, “You’ve just got to do the work; you might not want to, but you’ve got to.”

In addition to being out of the action and working patiently through the recovery process, one of the hardest aspects for Chris was the struggle to keep his earlier motivation alive. “The pain you feel while going through post-surgery and therapy is nothing compared to dealing with the unknown when things get really dark, especially for a person who really loves the sport they are playing.” Chris describes the challenge of seeing his teammates playing when he could not. “It can be very lonely, because no one knows that empty feeling of not being able to be part of the team.” He says that recovery is a mental waiting game. “Waiting for the pain to go away, [taking] time to develop trust in yourself again, waiting for that trust to develop with the physical therapists, and [trusting that] the therapy is going to go as planned.” Chris cites his family as his greatest influence in athletics and shares that they encouraged him and gave him pointers on how to stay positive and keep his head up.

Ashley explains that coping with an ACL injury requires an optimistic outlook. Recovery can be a long, arduous, and emotional process. “We see all [emotions] when we are dealing with athletes—from elation to despair, frustration, anger, and sometimes a little bit of depression. Our job as clinicians is to keep them on the right path and help them achieve their goals to get back on the field.”

Chris’s mental and physical capacities were instrumental in his recovery and therapy processes, Ashley says. “He lost a season of football. While all his friends were playing on the field and talking about the practices and the games, Chris understood that this was just his current situation, that he had to stay focused on his recovery to earn his place back on the team. [He] appreciated that he had been in recovery and therapy for almost a year. He was determined to come back from his injury.”

Back in the Game

Of his return to the playing field, Chris says, “When I went back to football [after the therapists] cleared me, I basically had to learn to trust myself again on the football field and how to move without thinking about it.”

The athlete’s triumphant return would not have been possible without his dedicated team of doctors and therapists and his resolve to overcome his injury. Ashley shares that Chris was exceptional in his determination by attending therapy every day, working hard, and putting himself in a position to succeed. “After the initial shock of the injury, he was very dedicated to getting back out there. He did everything we asked of him, and more.” She laughs a bit when she recalls how Chris was initially unhappy when asked to rein in his activity a little, noting that rest and recovery are just as important as straight-leg raises. Northside Hospital outpatient physical therapists Jennifer St. Joseph and Bob Breingan worked with Chris to maintain his pace after the ambitious baller kept asking them to give him more exercises.

Ashley explains that Jennifer and Bob worked with Chris to create exercises that mimicked football moves. “Chris was definitely one of the best patients, in terms of following directions. When Chris worked with the physical therapists, they pushed him, and I think that’s why he did so well. His recovery is a huge testament to his demeanor, his willingness to do what was asked of him, [and] the way he got along with our therapists. He is such a fantastic young adult that I can’t say enough about him. He’s a great athlete,” she continues proudly. “I wish more patients could be like him because he is so dedicated. He had the heart to come back.” 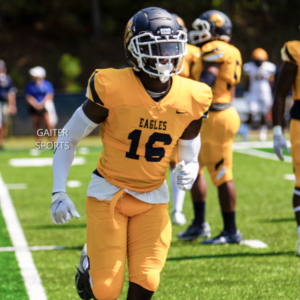 While ACL tears are common injuries among athletes, the recovery and rehabilitation process is much improved thanks to advances in medical knowledge. “The technology has come so far that it is allowing athletes to go back to the game,” Ashley notes. She describes how surgeons previously used either cadaver ACLs or hamstring tendons to repair ACL injuries. With advanced surgical processes, Ashley says surgeons and therapists are “seeing better recovery rates because we are using a person’s own tissue. Their bodies are accepting it better, and [the repairs] are lasting longer.”

Chris advises athletes who experience an ACL injury to be patient and do a little extra work. “I think that was why I was able to recover so fast. At home I did extra exercises, like body-weight squats, lunges, jogging, running, and stretching.” Chris stresses the importance of not giving up. “[Injured athletes] need to give their minds and bodies more time to heal properly.” He states that keeping a positive mindset is the most important factor. “Stay strong, be positive, and understand that this is just a little setback.”

While in recovery and therapy, Chris had time to focus on what he wants to do with his life. Even as a child Chris had entrepreneurial dreams but hadn’t determined the specifics of what kind of business he wanted to run. He says his dad encouraged him to plan his post-sports career, so he researched career paths that interested him. Upon learning more about the foreign exchange market, which he describes as “like stocks but more volatile,” he realized he wanted to pursue a career in that field and has been studying the trade. Staying in his positive mindset, Chris advises, “If you treat [an obstacle] the correct way, it can be the best thing that ever happened to you. Sometimes you need an extraordinary event in your life to open another door.”

Cindy Pope is an award-winning, Southern, petite blonde author who has been writing since the 1990s. She has written profiles in lifestyle magazines and contributed to literary journals. She resides in Woodstock with her British husband, Rob, three dogs, and one cat.