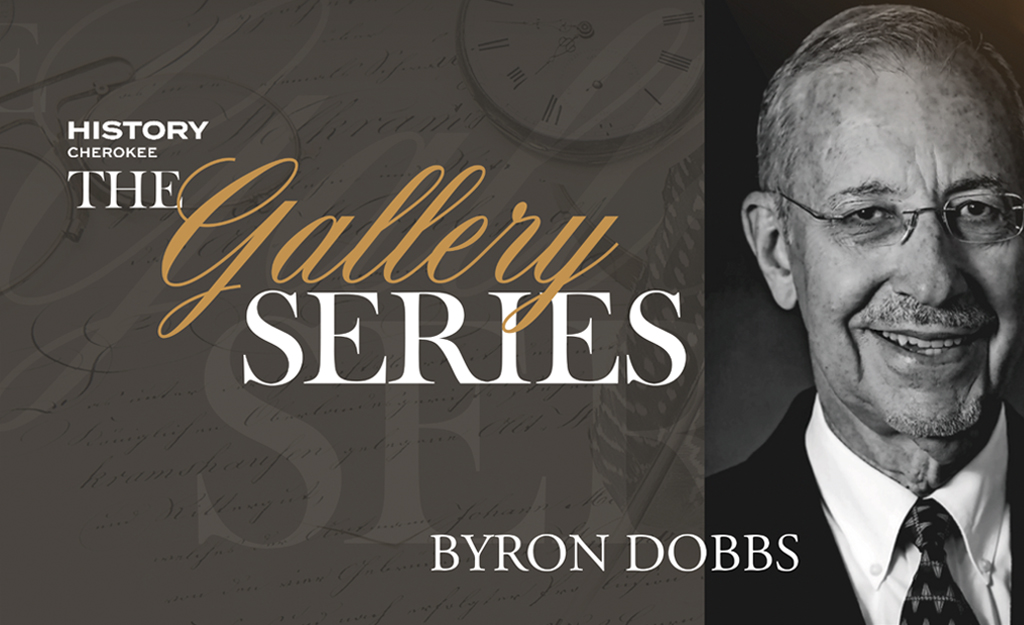 Highlighting the Historical Namesakes of the History Cherokee Galleries

After decades of collecting, researching, and cataloging, the new Cherokee County History Center is now open, offering visitors a chance to browse through artifacts and information from each era of the county’s rich and varied past.

The new Cherokee County History Center has five galleries that feature exhibits in chronological order so visitors can easily trace the county’s history from prehistoric times to the present.

The sixth gallery, named in honor of the late broadcasting legend Byron Dobbs through a gift to the center, features rotating exhibits and special installations from History Cherokee’s extensive archival collection. History Cherokee has more than 100,000 artifacts, including 70,000 photographs from the Buddy Alexander Collection and 5,000 projectile points, or arrowheads.

Dobbs, beloved local radio personality and Georgia Association of Broadcasters Hall of Fame member, enjoyed a distinguished career of more than sixty-five years in radio broadcasting that began in 1957 at WCHK radio station in Canton soon after Byron’s graduation from Cherokee High School.

Known as the “Voice of Cherokee,” the Woodstock native and lifelong Cherokee County resident was a part of WCHK for forty years until 1998. He then became a partner and owner of WLJA radio station and Tri-State Communications, where he worked until 2021, shortly before his death in 2022 at the age of 86.

Byron is fondly remembered as the voice on the radio who kept listeners informed of the latest news, election coverage, deaths, and important events of the day. He was also beloved as the announcer for local high school sports.

In 2017 Dobbs was awarded the prestigious First Citizen by the Cherokee County Chamber of Commerce for his unselfish and devoted lifetime of service.

“He was a historian who reported on stories over sixty-five years in radio that brought smiles to listeners’ faces while others evoked tears,” Chamber of Commerce President Pam Carnes said of Byron’s legacy.

In his illustrious career, Byron achieved many accomplishments, including being a main contributor and subject of the book, The Glory Days of WCHK. He interviewed elected officials including President Jimmy Carter and celebrities such as NASCAR driver Bill Elliott and country music legends Kenny Rogers, Conway Twitty, and Minnie Pearl. Byron was the first to chart country artist Travis Tritt.

During his lifetime Byron served on the Board of the Cherokee County Chamber of Commerce, was a member of the Cherokee County Historical Society and Sequoyah Regional Library Board, emeritus director of the Cherokee Sports Hall of Fame, honorary member of Rotary Club of Gilmer County, A-Day for Reinhardt University Committee, Cherokee Clean & Beautiful Commission, and organized the Easter Community Sunrise Service at Cherokee Memorial Park. He also served in the Georgia National Guard.

Byron was honored with a Daughters of the American Revolution Excellence in Community Service Award, with a Cherokee County proclamation for Byron Dobbs Day, Byron Dobbs Day in the city of Canton, and a Georgia House of Representatives Resolution for Distinguished Career.

He was recognized as a community leader by the Georgia Senate and received the Georgia School Boards Association Beacon Award, which recognizes journalists who have enhanced the public’s understanding of public education issues through reporting.

Byron was inducted into the Cherokee County Sports Hall of Fame in 2018 and was its first member from the contributor category for his work broadcasting local high school sports on the radio. He also received the Lamar Haley Community Service Award from the Rotary Club of Canton.

Admission to the museum is $9 for adults and $7 for children ages five to fourteen as well as seniors over sixty-five. Admission for children under the age of four is free. All History Cherokee members also receive free admission.

Will Cooper: The Man Behind the Mic