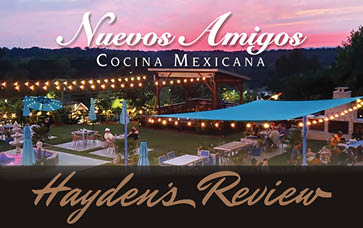 On a hillside in Canton overlooking a lush mountain ridge sits Nuevos Amigos Cocina Mexicana, a Mexican restaurant with an authentic menu and modern atmosphere. Owners Diane and Greg Hammond have handcrafted an upscale space that blends traditional and contemporary Mexican culture.

Diane grew up working with her family in its Marietta restaurant, which the family owned for nearly thirty years. As a young child she also spent summers with her grandparents in Mexico, learning to make tortillas by hand with masa she obtained from the village corn mill. She continues to apply traditional style to the dishes at Nuevos Amigos.

Greg’s contractor background came in handy when designing and building Nuevos Amigos in 2018. He built the booths and also provided many of the finishing touches.

The décor showcases the importance Nuevos Amigos places on authentic Mexican culture. Whimsical Dia de los Muertos sugar skulls and skeletons welcome you at the front doors and also while you walk through the dining space. The waiting-area bench, vases, large doors in the barroom, picture frames, and other objects were handmade in Mexico. At the front of the room hangs a photo of Diane at age eight with her grandfather in his adobe-style home in Mexico.

A genuine mom-and-pop establishment, Nuevos Amigos means “New Friends” in Spanish. It is the perfect place to gather with new friends and old. The backyard with its verdant lawn features an outdoor fireplace, a fountain, and a stage for live music. In the far corner you’ll notice a small garden where the owners grow a variety of peppers and their own mint for cocktails. Talk about fresh! 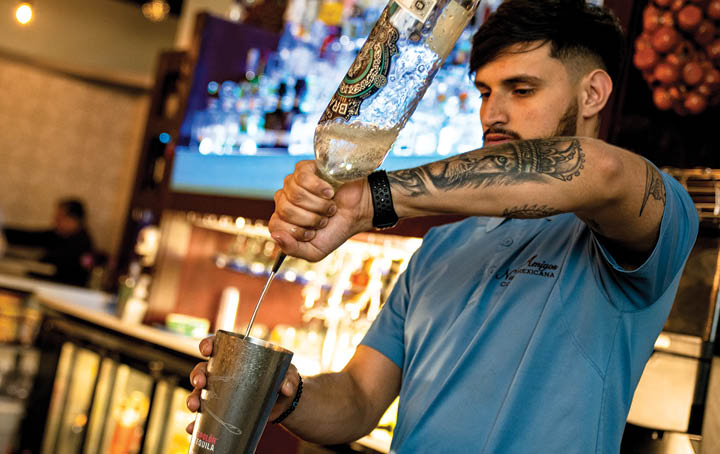 Once you’ve finished your meal, slink up to the rooftop—if you’re twenty-one or over—for a cocktail at one of the most magnificent sunset-watching spots in Cherokee County. Edible flowers from California adorn many of the refreshing drinks. On a breezy summer evening the rooftop is the perfect place to connect with friends while sipping a crafted cocktail.

Diane works closely with the chef, an employee for more than twenty-five years, to bring new dishes to the menu that reflect traditional Mexican cooking. Many of the dishes are from Diane’s family recipes. Proud owner Diane puts a great deal of care into the ingredients the establishment uses, never compromising, regardless of the cost. Greg defines the menu as “Simple but really good.”

MENU SAYS: Fried Jalapeños
HAYDEN SAYS: If you’re into spice, the fried jalapeños appetizer is perfect for you. Slices of fresh jalapeño are lightly breaded, fried, and served with homemade creamy cilantro dipping sauce that balances the heat of the jalapeños. 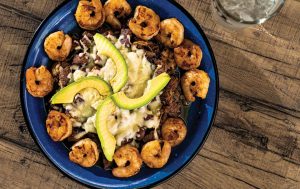 MENU SAYS: Chilango
HAYDEN SAYS: The chilango is a surf-and-turf dish with Mexican flare. Tender steak tips are cooked with onions and mushrooms and topped with melted cheese. Grilled shrimp and avocado slices surround the steak that is served with rice, beans, and tortillas to allow you to create your own taco combinations.

MENU SAYS: Churros
HAYDEN SAYS: Churros are simple fried goodness, and Nuevos Amigos takes them to new heights. The dough is fresh, light on the inside yet crispy on the outside and sprinkled with a generous amount of cinnamon sugar. They are served with ice cream and chocolate drizzle. 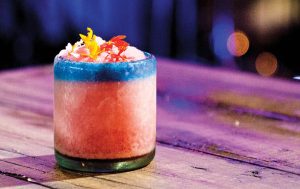 MENU SAYS: Piña Colada on the Rocks
HAYDEN SAYS: Coconut RumHaven combined with pineapple and coconut juices, this piña colada will have you dreaming of a beach vacation. Served with a pineapple slice, this tangy yet sweet cocktail is all the things a piña colada should be and more.