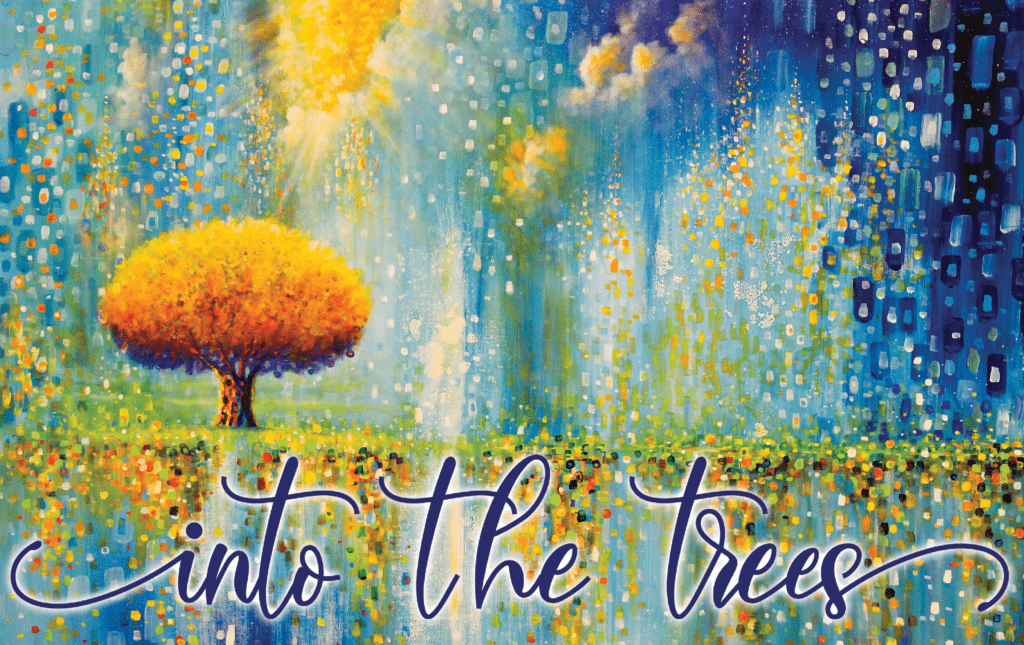 Because of Marlan Yoder’s distinguished look and kind smile, you might suppose he is an educator or scholar. He is an artist, though, and one who has found his passion and followed it to success.

You may make further assumptions about Marlan’s art. Surely a gentleman such as he would produce serene nature scenes or stately portraits in soft colors. In conversation, his faith quickly comes up, so you visualize religious paintings. Religious paintings are fine, but they aren’t Marlan’s style, or at least not blatantly. An artsy definition online of his painting style is “crossing the lines of surrealism and impressionism with his own brand of pointillism.” The best way to describe Marlan’s paintings is in terms of how they make people feel. Those who have viewed Marlan’s work often say, “Marlan’s work touches my heart.” Marlan, who dresses in colorless shades and doesn’t enjoy the limelight, paints like a blind man who has been given the gift of sight. His canvases are celebrations, portals to a world of fluffy cotton-candy trees. Multicolored confetti explodes on his canvases. Surreal blue skies move you. You feel many things, to the point of being overcome with emotion.

SAYING YES TO HIS ART

Marlan first recognized he had artistic talent as a child when he corrected another child drawing a horse. Marlan continued to dabble in art, but his blue-collar religious environment viewed art as a frivolous pursuit. His perception of serving God was something that should be draining and hard work. Marlan also felt art was not something that could earn him a living. Marlan grew up and married. He went into graphic design as a compromise, with the idea that he would paint in his spare time. Soon it seemed like a conveyor belt brought baby boys to his and Cheryl’s house. He had no spare time. Marlan knew it was going to take boldness to live the true artist’s life, so in 1991 he made a deal with God. He drew a line in the ground and said, “Okay, God, when I cross over this line, I am committing myself to my art one hundred percent. No more playing.” He stepped over that symbolic line drawn in his gravel driveway in Hartville, Ohio. Marlan was moving forward to fulfill his dream and make full use of his gift. When Marlan told his mother of his new commitment to his art, his mother had worriedly asked, “But what about Jesus?” A woman of faith, she needed to know her son was following his Christian calling. Marlan answered, “Mom, it was His idea.” In 1992 Marlan and Cheryl sought space and adventure, so they packed up their four boys and moved to Cherokee County. It was the first step for Marlan in saying yes to his art. The next thing that led to Marlan’s artistic freedom was a quote from the magical Sister Wendy Beckett in 1996, a most unlikely art critic on the show American Collection PBS. Sister Wendy said, “Never listen to what an artist has to say about what his work is about, because he doesn’t know.” Marlan says a light went on. With that one sentence, he realized art had power, but the power came from outside of him. He puts it this way: “For the first time, I was free to paint. I didn’t have to answer what a painting was about.” In Marlan’s first year in Woodstock, he produced thirty-five paintings. During the economic crash of 2008, things were not going well. Marlan had to close his art gallery. He was depressed, his wife Cheryl was unhappy, and the couple’s marriage was in trouble.

THE TREE OF LIFE

Many women wish their husbands would speak of them the way Marlan speaks of his wife. Marlan says he needs Cheryl and cherishes her. When he came close to losing her, he would have done anything to make things work, so he worked on himself. Simultaneously a separate piece of the puzzle was in process at the church Marlan and Cheryl attend: His Hands Church in Woodstock. Steve Craig, pastor at the time, says, “I felt God was telling me to share the message of the tree of life with the church. The tree of life is a connection with God. Out of it flows love, joy, freedom, and kindness. Jesus came, in part, to show us what those things look like.” The message resonated deeply in Marlan and settled him. He embraced the idea of letting God do the heavy lifting in life and put all his trust in God. Marlan says his relationship with God changed. “I began to go to the tree of life, Jesus, to direct my life.” Marlan’s life, marriage, and art began to change. Out of a desire to serve God, Marlan painted his first Tree of Life painting called When God Laughs. The painting looks like a tree exhaling with happiness, sending multicolored bits of celebration into the world. Marlan’s pastor bought it, and it hangs in his house today. Steve says, “I loved it immediately and saw it as an expression of God radiating joy, love, and lightness. When I look at the painting, it makes me feel grateful and appreciate what God’s really like.” That painting was the beginning of the most productive and prolific creative time thus far in Marlan’s life. Inspiration for the trees keep coming. Marlan has sold more Tree of Life paintings in the last ten years than all his paintings in the previous forty years. One year the church packed lunches for three hundred neighborhood kids in need and did it for five days a week for two months. Marlan painted an original tree on three hundred bags given out on the last day. In all, including gifts for volunteers and those lunch bags, Marlan has painted 760 trees, a small forest of Marlan Yoder trees. Reactions to Marlan’s work span the full spectrum of emotions. Some viewers cry, some feel great happiness, and several people have asked Marlan how he crawled into their soul. Marlan says, “I don’t have the power to do any of these things. I’m just a moron. I really am. It’s God working through me. I’m still learning to get out of his way.”

ART IN THE COMMUNITY

The Tree of Life paintings have had an impact far beyond Marlan’s career and the walls of His Hands Church. In 2009 Marlan felt God was telling him to start an art group at His Hands. Marlan will freely tell you he was not excited about the request, but he was learning to surrender to God. Since then people from the church have come together on Wednesday nights to paint. Some work on their painting skills, and some discover they have skills at all. For others it’s more about the therapy, rather than the painting. Marlan is also involved in an annual fundraising event called Canvas that began in 2013. He loves it. He says, “Canvas has been wildly successful despite of me. It has blessed a lot of people.” People from the church and community pay to come together and paint the Tree of Life with Marlan leading them. The Art Group sets everything up and helps those who have questions. Over a seven year period, Canvas has raised more than $200,000 for people in need. You can view Marlan’s work at Tranquility Fine Arts Gallery, Century House Restaurant, and His Hands Church as well as Marlan’s website, MarlanYoderArt.com. What if God tells Marlan to stop painting the Tree of Life? Marlan doesn’t seem concerned. “If God wants me to stop painting trees, then he will have something else for me.” Marlan says that as he has learned and grown, he has become more and more excited to be a Christian. “From this passion, I can share something real and honest.” No matter what path or forests Marlan navigates, Cherokee County is blessed to have him, his family, and his artistry rooted here.