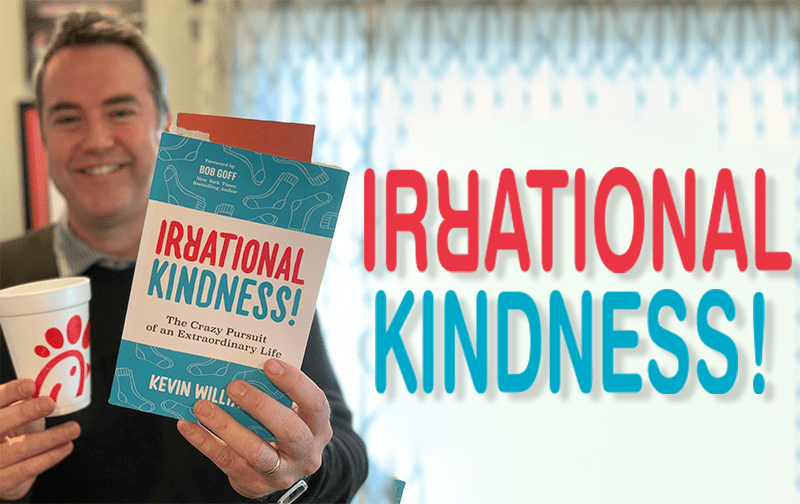 The world knows Chick-fil-A by the employees’ pleasant demeanor and “my pleasure” slogan. It makes sense that you might associate Chick-fil-A with kindness. Kevin Williams, though, a local franchise owner and entrepreneur, has taken Chick-fil-A’s infamous kindness to an irrational new level.

Kevin Williams is one of a few Chick-fil-A triple franchisees, and all three restaurants are in Cherokee County. Early on, Kevin was inspired to work hard, treat people with respect, and let his dreams develop along the way. He attributes much of his success to the strong foundation laid through his faith and his family. In 1985 Kevin was a teenager in Tucker, Georgia, with high hopes for his neighborhood landscaping business when Truett Cathy, founder of Chick-fil-A, visited Kevin’s church to speak about entrepreneurship. Truett’s irrational and people-centered approach to business sparked a fire in Kevin. The fire grew slowly through Kevin’s various businesses and career paths, and eventually it spread throughout Cherokee County.Kevin has authored Irrational Kindness: The Crazy Pursuit of an Extraordinary Life, branded as part employee handbook, part operating manual for life. Each chapter contains one of Kevin’s stories related to one of his guiding principles for life. The anecdotes are followed by a “Kindness Pause” between chapters that encourage a moment of reflection on the life lesson just explained. The feel-good book includes a foreword by Bob Goff, New York Times bestselling author of Love Does and Everybody, Always.

Kevin got his start with Chick-fil-A after working at various locations and being persistent in getting his foot in the door as a franchisee. Truett Cathy was one of the first businessmen to design a franchise model that allowed investors with few assets to own their own business with very little upfront cost. Kevin began his pursuit of owning his own restaurant with Chick-fil-A in 1991. After a two-year chase, in 1993 he received his first assignment—to turn around an unprofitable store in Midtown Atlanta. “It was a challenging store, and I had never been in the restaurant business, but I knew the business was all about people,” Kevin explains. In his book he recalls, “I worked as hard as I ever had to build relationships with every team member. I saw that building these relationships would be the driving force behind managing quality and cost.” Kevin’s people-first frame of mind carried on past his first Chick-fil-A and allowed him to move forward to opening the Canton Riverstone location in 1996. By 2009 Kevin was able to open his second location at the Canton Marketplace, and ten years after that, he opened a third in Hickory Flat.

Long before Kevin wrote Irrational Kindness, he made it a passion and priority to put kindness at the forefront of his business model. He says, “Kindness over Everything has always been the motto at our Canton stores.” This slogan was internally referred to as “irrational kindness,” hence the name of his book. The staff also wears sweatshirts encouraging, “Be Canton. Be Kind.”

Irrational Kindness stemmed initially from Kevin’s over-the-top commitment to “Coffee with Kevin,” a twenty-five-year tradition wherein he invites all newly hired team members to sit with him one-on-one. Kevin says, “I share principles that are important to me in life: the beauty of failure, persistence, how God created you original, and how wonderful you are the way He created you.” His goal with all new team members is to learn about their dreams and goals and help them reach those goals, even beyond their time with Chick-fil-A.

What exactly does “irrational kindness” mean? In his book Kevin writes, “To us, irrational kindness is much more active. . . . It reminds us to stay kind, respectful, and courteous, even when we hear something we don’t agree with or understand, and the courage to stay, even when we don’t see progress.” He goes on to say, “It’s important to note this level of kindness does not mean selling out, giving in, or getting run over—it simply means being kind, even when it seems irrational.” Irrational kindness, he says, is more than random acts of kindness. The difference is in being kind despite fear of being wrong and despite the scales not balancing in your favor. This brand of kindness is not one we see often, but it is one we can find in Jesus’s teachings—something Kevin looks to constantly. Our world can seem overwhelmed with negativity, but it brings hope and joy to know there are people like Kevin and the Chick-fil-A team spreading irrational kindness through our community. Imagine if we all picked up a dose of irrational kindness to give to others!

Kevin puts into play a tangible aspect of irrational kindness through his project called The Farm. It is a fifteen-acre lot in Cherokee County that Kevin envisioned as his team’s meeting spot. Kevin’s mind, though, teems with ideas for how The Farm can be used to benefit all members of our community and beyond. In his book Kevin calls it “a spot for community connection; a farm where relationships can grow.” He has hopes for the space to be used for anything and everything related to the community. The land could be a meeting place for events, ministry programs, counseling services, support groups, or creative retreats. Without designated programs to be held there, The Farm is to be used as the community needs it. It may seem irrational, but that’s Kevin’s style.Kevin and our local Chick-fil-A teams are passionate about spreading irrational kindness through Cherokee County and the world. Kevin urges our community to continue the conversation around kindness and how to transform our lives to center around kindness as a lifestyle. He explains the goodness that can result if we change our thoughts toward living a more intentional, irrationally kinder life. Kevin’s goal for the book is to make an impact through practicing irrational kindness. He does so by donating all book proceeds to benefit foster children, adopted children, and families in crisis. Kevin has made his career at Chick-fil-A about much more than chicken. His perspective is a great model for us all. We can all make our jobs and careers about something more. It’s an irrational way of thinking, and it can change the world. Kindness can domino around the globe. It seems irrational, but we can do it.