Turn Flights of Fancy into Reality 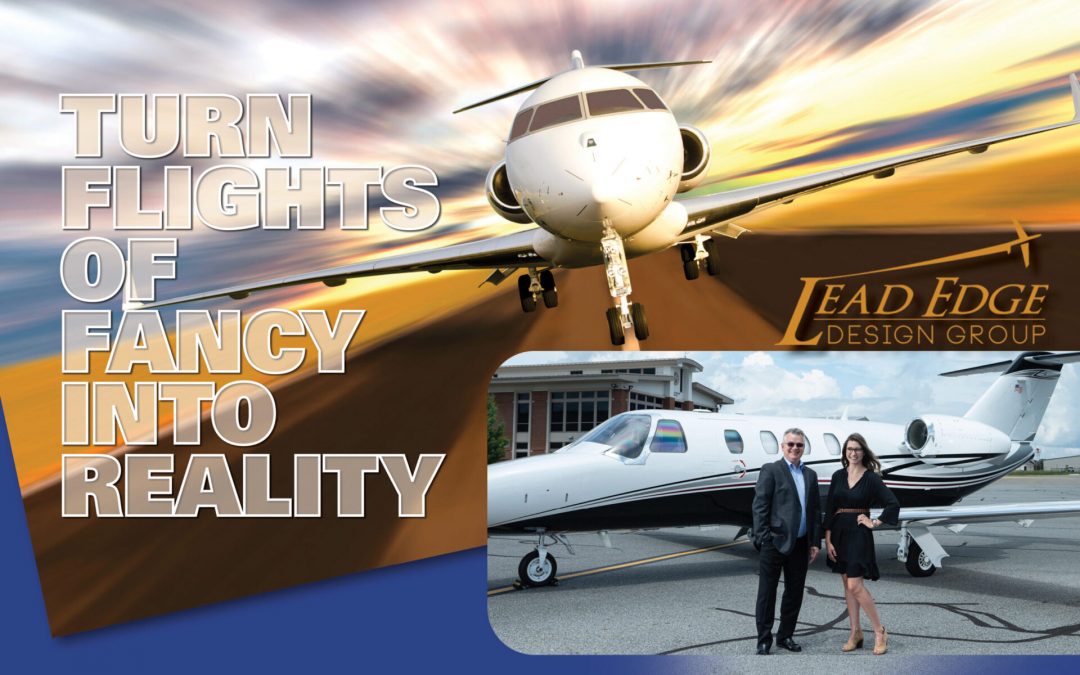 Ask anyone in Cherokee County where the nearest airport is located, and most will answer Hartsfield-Jackson in Atlanta. Some who know the area well may mention other midsized airports nearby. Few people, however, recognize the Cherokee County Regional Airport in our backyard. Amanda Rostin and Phil Eberly of Lead Edge Design Group are working to change that fact. Situated on Airport Road in Ball Ground, “The airport is the front door to the community,” says Phil, president of Lead Edge. “The airport is important to people who live nearby and who keep their planes there, but it’s also the first thing many people see, people who fly here to do business and spend money in Cherokee County.” Kelly Clarkson and Reba McEntire are among those who have flown into Cherokee County Regional Airport, as it’s officially known, to do business. Both visited the area to buy horses. Other arrivals may be interested in making business investments in Cherokee County. “When you see an out-of-town jet land here, you have to ask who is in the back of that plane,” says Phil. “Maybe that person is here to do business with a local company that supports local jobs. Maybe that person is here to find a place to locate a new business that will create jobs, but those people came to Cherokee County for a reason, and the airport made it easy for them to get here.”

Built in 1966 as part of Georgia Governor Carl Sanders’s initiative to develop local airports, the original iteration of the airport had a 3,400-foot runway and a terminal that was actually a lean-to on the side of a hangar. As Cherokee became one of the state’s fastest growing counties, though, the airfield underwent a substantial upgrade in 2010 that included construction of a brick two-story terminal building with a portico for dropping off and picking up passengers as well as an extension of the runway to five thousand feet, the required minimum length for any community serious about attracting business.

“People think that having a longer runway means bigger planes can come to the airport, but that’s a misconception,” explains Amanda, Lead Edge project manager. “It actually has to do with stage length—how far a plane can travel after taking off without having to stop and refuel.” The math is simple, but it translates into a significant economic benefit, both for the airport and the community. A plane full of fuel weighs more than one three-quarters or half full. A heavier plane requires a longer runway to take off, so the longer the runway, the more fuel a plane can carry when leaving and the farther it can go without stopping to refuel. Airports that provide space for heavier planes to take off are more likely to have planes land there in the first place.

“Right now with a five-thousand-foot runway, planes leaving Cherokee Airport can reach an arc of states that includes Texas, Iowa, Wisconsin, and New Jersey,” Amanda continues. “That’s good, but it also means business owners in Phoenix or Denver who travel by corporate jet may be hesitant to consider Cherokee County as a location to expand their businesses because they can’t get all the way back home without stopping. With a six-thousand-foot runway, planes flying out of here can fill up with enough fuel to reach the West Coast.” For that reason, plans are underway to add another thousand feet to the runway, a project expected to begin in 2021. A road that runs more directly between the Bluffs business corridor and the airport will complement the runway expansion. Lead Edge is expected to play a critical role in those projects as well. 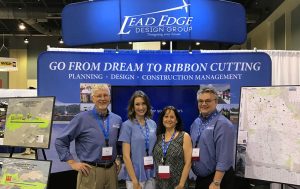 The Lead Edge Design Group travels to communities throughout Georgia educating residents about the many benefits that accompany a local airport.

Phil founded Lead Edge Design Group in 2015. The combined experience of its staff includes work on more than seven hundred airport projects. Phil himself has worked with more than seventy of Georgia’s 103 airports, including more than three decades as a consultant for the Cherokee County airport. He says Lead Edge is more than just a design engineering firm. When starting a new project, the company always focuses first on the communities in which its client airports reside. It works with communities all over Georgia, including Sandersville, Jasper, Calhoun, and Warm Springs to name a few.

“We have small-town hearts,” Phil says. “When we start an airport project, first we meet with community leaders and ask about their vision and dreams for their community. Sure, we can give them a set of plans and specifications, but communities want more than that, and as a company we want to give them more. That’s what separates us from others in this business. We are creative, we are passionate, and we want communities to benefit from their airports in ways they may not have envisioned.”

As an example, during an upgrade to the Meriwether County airport in Warm Springs, Georgia, Lead Edge was able to incorporate two large outparcels for public exhibition spaces. Now the community has a convenient place to gather for fairs, car shows, and fly-ins, with the airport as a backdrop. At the Wilkes County airport in Washington, Georgia, in addition to a federal grant to extend the existing runway, Amanda helped identify funding for the facility to be rehabilitated. Less than an hour from Augusta National Golf Club, the upgraded airport now attracts private jets flying in for the Masters Tournament with passengers likely to stay and spend money in Wilkes County.

“Amanda is really creative, very driven, and extremely passionate,” says Phil. “She distinguished herself from day one, and the people in the communities we work with recognize her talent and her spirit.” 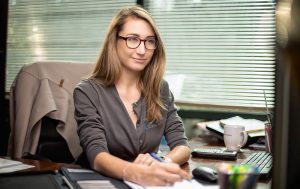 Amanda Rostin, Lead Edge project manager, aims to have a positive impact on the aviation community of Georgia and Cherokee County.

A 2016 graduate of the University of Georgia with a degree in civil engineering, Amanda was named one of the Cherokee County Chamber’s Top 10 in 10 Young Professionals to Watch this summer. In September she was named to Georgia Trend’s 40 Under 40, one of Georgia’s most prestigious business honors. A native of Alpharetta, she just bought her first house, and she bought it in Canton.

According to Phil, Amanda not only exemplifies the above-and-beyond ethos of Lead Edge, but she is also one of the increasing numbers of driven and ambitious professionals who are calling Cherokee County home. He should know; he lives here too, in Woodstock, where Lead Edge is based, a prime example of how the airport attracts businesses and jobs to the county.

LOOKING TO THE FUTURE

“This is the best place for us to be,” says Phil emphatically. “Cherokee County is business friendly with a positive business atmosphere, a fantastic recreational atmosphere, and a great quality of life. You can come to Cherokee and have your business here and your family here. We are excited not only to make the airport even better, but also to make sure the community continues to benefit as well.” 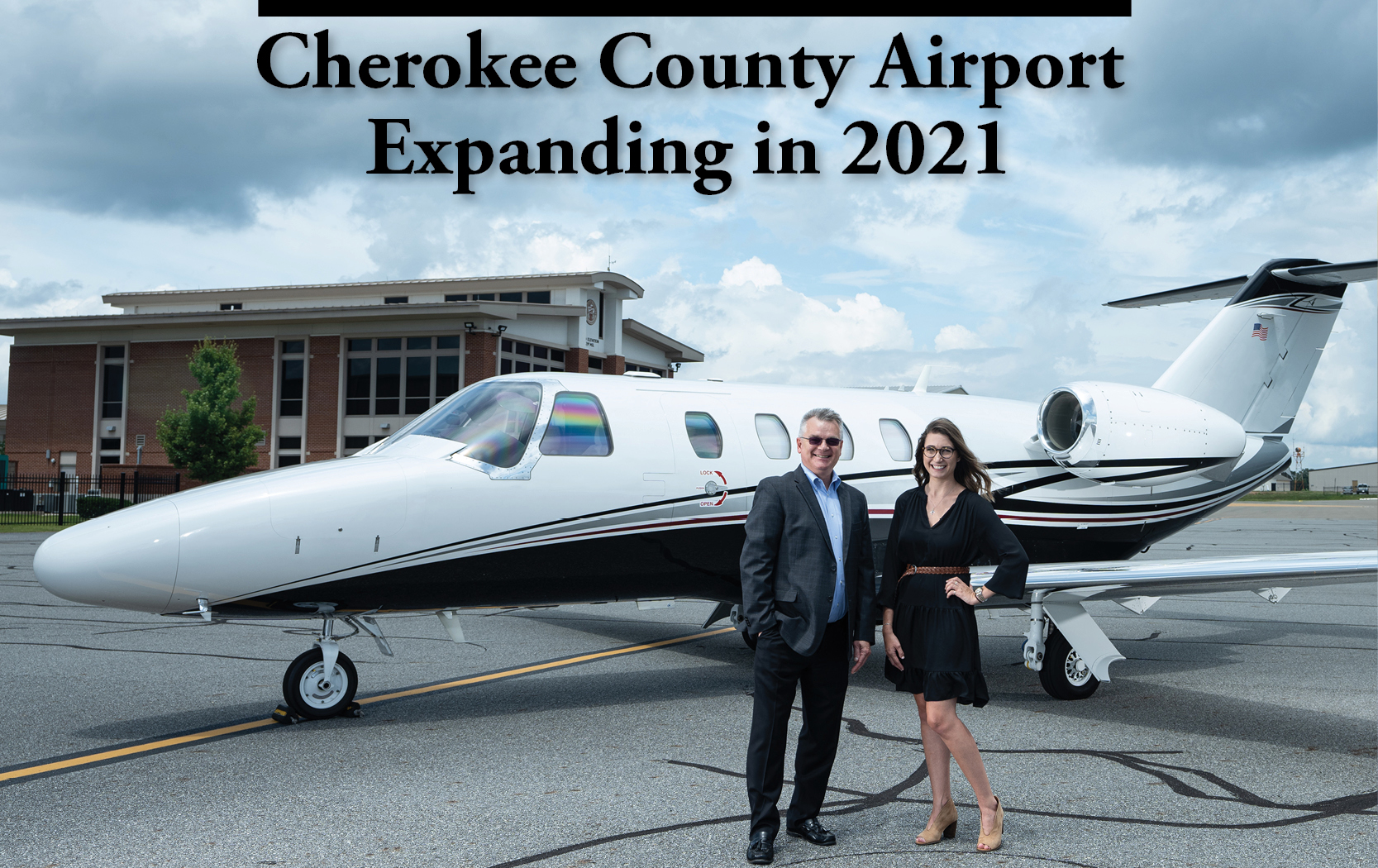