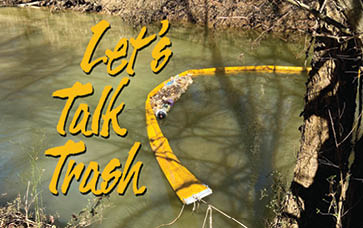 Our local water resources are a critical part of what makes Cherokee County special. Those resources make our water taste great and give us places to swim, kayak, fish, boat, and float.

With multiple tributaries, creeks, and rivers feeding into Allatoona Lake, the waters can get a little—how else to say it—trashy. For the environment and our recreational purposes, it’s crucial to reduce the amount of trash that ends up in our beautiful waterways.

The Lake Allatoona Association (LAA), in partnership with the City of Woodstock, conducted a six-month Noonday Creek trash-trap study beginning September 1, 2020, and ending on February 28, 2021. Craig Myers, a leading Allatoona Lake Warriors volunteer, directed the pilot project. Craig explains, “Cleanup has always been a reactive effort. People have been picking trash out of our lake for decades, but I’m taking more of a proactive approach. I want to find out where the trash is coming from and stop it before it gets into the lake. We also want to identify the quantity and types of trash.” Craig was highly involved in each step of the process—researching, analyzing, and ensuring the project’s success. 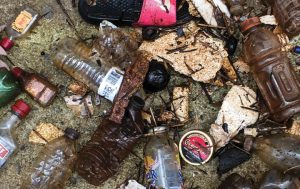 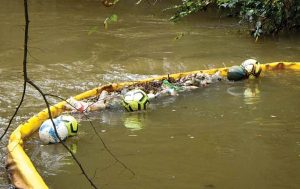 The group placed a floating boom-type trash trap buoy line at an optimal location on Noonday Creek with the goal of collecting debris that would have flowed into Allatoona Lake. Floating boom-type buoy lines vary in length but are approximately eight inches in diameter—three to four inches of which float atop the water. The floating plastic boom anchored on the riverbank easily captured floating trash and debris. These types of booms do not affect wildlife, recreational users, or the passage of water. A passionate group, Craig and his team of volunteers made multiple trips each week to clean the trash trap and examine the findings.

The goal is to continue the LAA’s mission to improve the quality of our lake. The group hopes to resume the program through similar partnerships with other government organizations. By maintaining the inflowing tributaries, it can provide cleaner rivers, streams, and ultimately, a cleaner Allatoona Lake. Craig says, “The number-one thing is that it has been a huge awareness project. People walk by the sign beside the walking trail, they see the trash pile up, and they ask questions.”

Ultimately the study was a success, though there’s room for improvement. The summary report of the project states, “The LAA is highly confident that only a fraction of trash flowing through the creek was trapped by our weir test project system. The amount of trash collected was constrained, mainly because items got past the trap during heavy water and debris flows and still entered the lake.”

The LAA took its findings of the study at Noonday Creek to the City of Woodstock and proposed a permanent installation of a cost-effective and capable boom that would continue to collect trash effectively at the Noonday Creek location. The organization hopes to grow the program into surrounding jurisdictions. It has already received positive responses from city and county officials. LAA is one step closer to clearing our rivers.

With government support, volunteer assistance, and public interest, the LAA and the Allatoona Lake Warriors will be able to reduce the trash in our rivers and lakes and increase awareness of the importance in keeping our tributaries as trash free as possible.