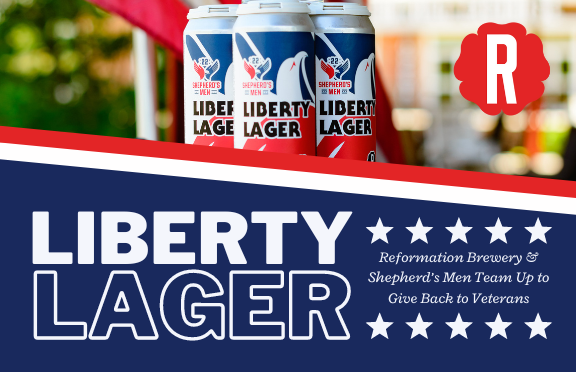 Reformation Brewery, Liberty Lager, and Shepherd’s Men together make a huge difference for veterans, just like veterans did for us. 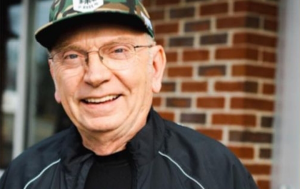 ABOVE: Navy Veteran Augie Olsen is a brand representative for Reformation Brewery. “Ambassadors help us represent the values and vision of our business to the community,” explains Reformation CEO and cofounder Spencer Nix. “We love having brand ambassadors who have stories to share. Reformation’s goal has always been and will always be more than just brewing a well-made beer. It’s about liberating the reformer in all of us, and Augie is a great example. We are privileged to have him.”

The collaboration began when an employee of Reformation Brewery became aware of the work the Shepherd’s Men program was doing with another brewery. The Reformation team wanted to get involved as well, so the marketing team partnered with Shepherd’s Men through its Drink Well With Others series. Although the actual drink the Reformation Brewery in Woodstock created is an IPA—New England style beer, the Drink Well With Others series is an initiative to give back to the community through partnerships with worthy organizations.

With veterans in mind, the Reformation team created Liberty Lager. The patriotic beer is a light American Lager (4.7%) dry-hopped with Liberty hops. Yes, the beer contains hops called Liberty. Can it get more American than that? Liberty is a noble hop with a mild, clean spiciness and a subtle floral note. One dollar a pint is donated to Shepherd’s Men and its free comprehensive care. The mission is to share the burden and drink good beer. 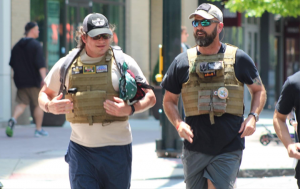 ABOVE: Georgia native and cofounder of Shepherd’s Men Travis Ellis (pictured right) runs with Glenn Wells, retired GySgt in the Marine Corps, who is a SHARE graduate of 2018.

Augie Olsen, brand ambassador for Reformation Brewery, stepped in to help promote the limited-edition beer. Reformation Brewery’s creative director Jessica Miller says, “We love having Augie as a part of our team. He brings a lot of heart, hustle, and humility to his work. Because he’s a veteran, it is a natural fit for him to be involved with Shepherd’s Men. He’s a first-generation American who served in the military, and he is passionate about his fellow vets.”

Cofounder of Shepherd’s Men Travis Ellis continues to be involved with Reformation Brewery and now sponsors the monthly veterans meetups at Reformation’s Woodstock location. The brewery also offers 25 percent off to veterans year-round. When you go to a meetup, you’ll probably even get to share a beer with Augie, as he makes it a point to be there among his people.

The SHARE Military Initiative at Shepherd Center is a comprehensive rehabilitation program that focuses on assessment and treatment of service members who have served in the U.S. military since September 11, 2001, regardless of their discharge status. The program helps service members who are experiencing symptoms of or have a diagnosis of mild to moderate traumatic brain injury or concussions and any co-occurring psychological or behavioral health concerns, including post-traumatic stress.

ABOVE: In honor of Memorial Day 2022, this group of dedicated Shepherd’s Men supporters participated in a run from Reformation’s Canton location at The Mill on Etowah to Reformation’s downtown Woodstock location—with a quick stop at the halfway point: veteran-owned Alma Coffee on Holly Springs Parkway.

If you are a veteran in crisis or concerned about one and need immediate assistance, connect with the Veterans Crisis Line twenty-four hours a day, seven days a week, dial 988 and press 1 or text 838255

Learn more about Augie Olsen’s journey from World War II-era Holland to the US Navy and beyond—click here.