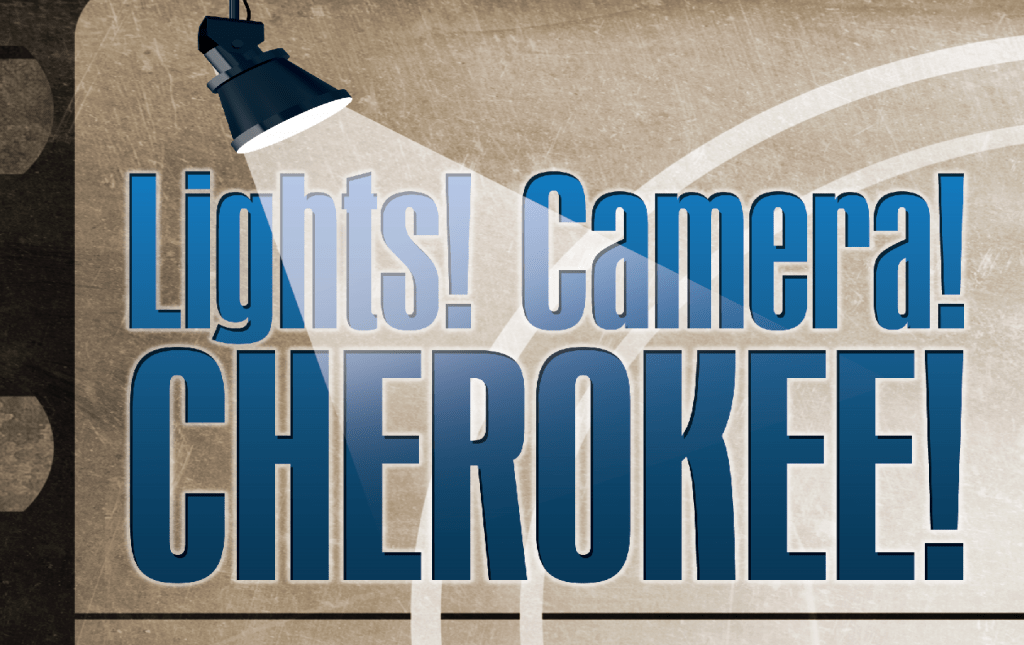 State tax credits for the movie business have made Georgia the new Hollywood. More movies are made in Georgia now than in California or New York, and Cherokee County has emerged as one of the state’s top filming locations. With a variety of scenic vistas, welcoming municipalities, and a county film project office second to none, Cherokee County and its residents are reaping the economic rewards of the entertainment industry here at home.

When a film director shouts, “Action” it is not only the beginning of a scene, it is also the culmination of months or even years of planning. Whether it’s a television show, streaming series, independent film, or big-studio blockbuster, the process takes time. First it is an idea, a story, and a script. The next moves involve hiring a director, securing financing, casting actors in the roles, creating a production schedule, and finally, filming.

Even with the best people in all those jobs, what makes a good movie into a great movie isn’t a person at all. It’s the setting, the environment, the scene. If it’s done right, the scenery may be what you notice least, yet scenery can create emotion—joy or foreboding—a sense of place that drives the plot before an actor utters the first word of dialogue. And it’s the scenery that’s drawing directors and producers to Cherokee County in record numbers.

“Cherokee County, from a practical and visual sense, has a broad array of looks,” says Molly Mercer, film project manager and camera-ready liaison with the Cherokee Office of Economic Development (COED). Because her job involves working with location scouts to find the right location for a proposed production, the Cherokee County native can tell you all about the diverse scenery within the county’s 434 square miles.

“Canton is an iconic and charming small town. Woodstock has a bit of a quirky and hip vibe. Ball Ground could be a mountain town. Holly Springs has both older and evolving looks,” Molly says. “Waleska has a beautiful college campus and of course rolling farmland with mountains in the distance. We have a lake (Allatoona), we have the Etowah River. We have mansions, churches, a railroad, busy streets, and country roads. If a production company needs a specific look or building or environment, we can almost always find it right here in Cherokee.”

Dodd Vickers, a professional location manager, and scout for the past decade, likewise has a lot of good things to say about filming in Cherokee County. “I did two productions in Cherokee recently,” says Dodd, whose Internet Movie Database listing includes several dozen movies and TV series, all filmed in Georgia. “One called High Expectations is about an athlete and his relationship with his father, played by Kelsey Grammar. We filmed all over downtown Canton. We were in Woodstock and then at Kennesaw State too.

While clearly a lot draws directors and producers to Cherokee County, Molly explains that keeping them coming back is perhaps even more important. Fortunately the commitment to make filming in Cherokee County a positive experience extends well beyond the COED film office, with municipalities, public safety agencies, land owners, property managers, and local businesses all working to make production companies feel welcome.

As Dodd explains, a large production may have two hundred people on location, so it is important to be able to work with the community to manage everything that needs to happen. “A lot of logistics and management go into a large production,” he says. “If we need to close down a road for half a day to film, I might work with the city and the police agency. We need space for two hundred people to park. Is there a landowner nearby I can work with? Is there a local company where I can rent bathroom trailers for the location?

“Sometimes filming in a location becomes more difficult than you think it should be, and when a town gets a reputation for being difficult, you get less filming,” Dodd says frankly. “Cherokee is not like that at all. Here the neighbors are good, polite, and accommodating, and the cities and county are all great. I really commend them for being able to come up with creative solutions to help us get our work done.”

Having a national reputation as a good place to make movies has another important benefit: every time a production crew comes to Cherokee County, it creates a positive economic impact in many and lasting ways. Molly says, “When they were in downtown Canton filming Hawkeye for Disney+ in early 2021, there were about 185 people on that shoot for ten days, so just the motel/hotel tax revenue was significant. They also had a crew of about thirty people here for eight weeks before filming, building sets and getting ready for production, and those people ate in the restaurants downtown, bought coffee, and shopped, so that was great.”

Filming also drives film tourism, and not just movie buffs who might be crossing the county using the Filmed in Cherokee app (see sidebar). “Say a series is filming in downtown Woodstock. People driving by may stop and watch, see what’s going on,” Molly explains. “And while they’re downtown, they look around. Maybe they see a restaurant they didn’t know was there or a unique shop they want to visit or even an attorney’s office they’ll remember if they ever need a lawyer. That too is an economic benefit of the film industry being here.”

More film and video productions are coming to Cherokee County every year; big names too. Netflix, ABC, Showtime, HBO, HGTV, CBS, CNN, Disney+, Bravo, and Starz have all filmed here, though few people may ever know. Most productions want to keep their work location secret, and the consistent ability of COED to guard their privacy is another reason producers like working here.

Ultimately the numbers speak for themselves. Molly shares, “If we are winning projects eight percent of the time, we’re doing pretty well, beating the odds, but Cherokee County is winning about twenty-five percent of the time. In 2021 COED had 173 inquiries by Thanksgiving and forty-five projects filmed here. That’s a record breaker right there. That’s phenomenal. Filmmakers are coming and asking more often, and I attribute it to Cherokee’s persistent willingness to work with filmmakers.”

If you want to learn more about opportunities in Cherokee County’s burgeoning film production industry, the Cherokee Film Summit is a must.

The 2022 Cherokee Film Summit has the theme of “Reel. Community. Connection.” It will be packed with panels, speakers, networking, and much more, all focused on supporting the film industry in Cherokee County.

“This is our third summit,” says Molly Mercer, film project manager at the Cherokee Office of Economic Development. “Every year it gets better, because every year the industry grows in Cherokee and there are more opportunities for people to get involved, to partner, and to find something new. We want people to be bold and connect.”

Sponsored by Cherokee By Choice, a public-private partnership, the 2022 Cherokee Film Summit will be held Thursday, March 10, from 5:00 to 9:00 at the YANMAR Evo Center on Old Alabama Road in Acworth. Tickets are $50 and available on Eventbrite. For more information visit Cherokeega.org/Cherokee-Film-Summit/.