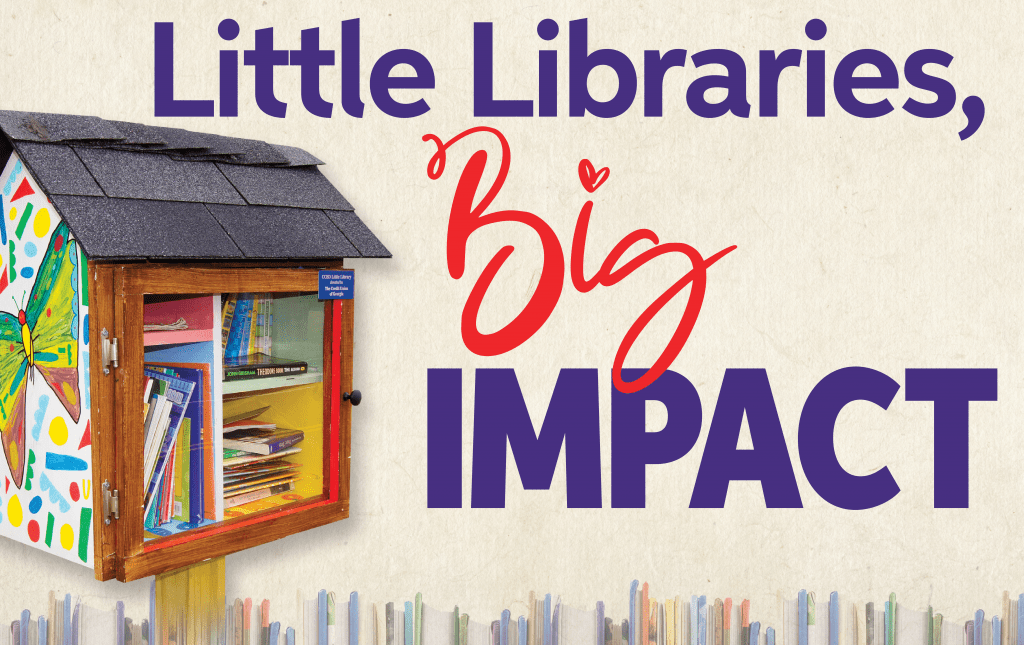 To boost both kindness and literacy, Tod H. Bol founded the Little Free Library, a nonprofit organization. About a dozen years ago Bol built a birdhouse-like structure with a clear glass window and installed it in front of his home with the simple direction, “Take a book. Leave a book.” Today similar small structures can be placed anywhere—in front yards, in front of churches or businesses, in parks, and in the case of the City of Los Angeles, in police stations. The idea is that no matter a person’s circumstances, everyone can have access to great books.

Todd, who passed away from pancreatic cancer in 2018, said about his pet project, “I really believe in a Little Free Library on every block and a book in every hand. I believe people can fix their neighborhoods, fix their communities, develop systems of sharing, learn from each other, and see that they have a better place on this planet to live.”

Since its inception in 2009 the modest little project has become a worldwide movement, with some 100,000 Little Free Libraries (LFLs) in all fifty states and in more than 108 countries throughout the world. Some of the boxes are simple, but other people have created LFLs that are a testament to imagination. Some LFLs look like miniature churches. One is an exact replica of a Volkswagen bus, another is shaped like a canoe, and yet another resembles Oscar the Grouch, complete with trash can. If creativity isn’t your strong suit, the organization has kits you can purchase to build your own LFL with only a few basic tools.

Thousands of stories have come from people who took the time to build a LFL, but one of the most heartwarming is from an older gentleman in Sherman Oaks, California. He placed the library in his front yard and noticed an immediate response. “[The library] turned strangers into friends and a sometimes-impersonal neighborhood into a community. I met more neighbors in the first three weeks than in the previous thirty years.”

In Cherokee County Cristin Bell, Justine Beckebrede, and Beth Cronan, three teachers from Hasty Elementary, spearheaded a project to get two LFLs in Canton city parks. They contacted Canton City Councilman Shawn Tolan, who loved the idea, but thought they could do even more. He put a post on the Cherokee Connect Facebook page. The response was instantaneous and overwhelming. Within six hours of the post going live, the city had enough sponsors to put LFLs in all eight city parks.

Shawn says that while volunteers built most of the libraries from kits the website provided, some volunteers made others from scratch. “The Little Free Library Project was a labor of love. It clearly demonstrated how people will gladly raise their hand whenever there is a worthy cause. Most of the sponsors pulled money out of their own pockets to fund the libraries, and the City of Canton staff bent over backwards to help bring it to life. Kudos to everyone!”

Thanks to the volunteers’ efforts, residents and visitors alike now can take a book or leave books in any of the eight Canton city parks.

In addition, Cherokee County School District, with funding from the Credit Union of Georgia, sponsored a project to build more Free Little Libraries at a number of elementary schools throughout the county. The best part about this project is that the libraries were built by Cherokee County high school students in the construction career pathway program.

Scott O’Bryant, the construction careers teacher at Cherokee County High School, was responsible for building eleven of the twenty-two libraries. “It was a great project,” Scott says. “My students loved building them. They enjoy projects where they can drive by and say, ‘I built that.’ They loved that the little libraries were going to be put up at Cherokee County schools. One of the libraries went to Clayton Elementary, where a lot of my students went.”

Scott continues to boast of his students. “In particular they loved the challenge of building the little libraries. There were so many steps and stages, and they really enjoyed that part of it. The paintings on each of the boxes were done by the art class, and the scenes are amazing. They created Dr. Seuss scenes or other scenes out of their favorite children’s books. It was a really cool project, and I hope we get to do something like that again. It seems like the students turn it up a notch for anything that involves giving back to where they came from.”

Elsewhere in metro Atlanta, a nonprofit based in Morrow called Family Literacy of Georgia and Little Free Library have together launched an initiative called Read in Color. The program has built twenty new LFLs and distributed more than 3,500 diverse books in hopes to promote understanding, equity, and inclusion.

Shavawn Simmons, the executive director for Family Literacy of Georgia, is excited about the project. “What an honor to be selected to partner with the Little Free Library organization on Read in Color, a program to intentionally place book-sharing structures in communities of color. For me the cherry on the top is the fact that each of our stewards will receive a year of free new diverse books: diverse authors, diverse topics, and characters centered on people of color.” The program also serves communities where lower-income children may not have access to books of their own.

There are a million reasons to build and promote the Little Free Library movement, but the biggest reason might be to inspire further action. The good people who run the Little Free Library organization have started a new venture—LFL Action Book Clubs. Here’s how it works: Select a group of friends. Read a book together, discuss it, and then, inspired by what you read, volunteer to do something good for the community. The concept is simple but powerful: ideas for books and then ideas for action. It’s about combining reading and community service. To join go to the website, sign up, and it’s free. You can choose a book from the vast selection on the website or pick your own. It even has choices tailored to specific age groups. Your group reads the book, discusses it, and then the book club hopes the book inspires you or your group to start a community project of your own. If your team is stumped for service ideas, the website lists many. The only thing the organization asks is for your group to share its story on the organization’s website, in hopes it will inspire others.

Margaret Aldrich, the director of communications and media relations at the Little Free Library, explains about the voluntary activity. “It can be something very small or more ambitious. You might read A Man Called Ove and decide you’re all going to shovel sidewalks for your elderly neighbors. It might be something as simple as that. Or read The Underground Railroad and explore social justice issues in a deeper way. Whatever speaks to you.”

The Little Free Library has blossomed from one man and a small box in a yard in rural Wisconsin to a worldwide movement that speaks to everyone.

To learn more, get involved, or build your own Little Free Library, go to LittleFreeLibrary.org or call 715-690-2488.

Find One Near You

To find a Little Free Library near you, go to LittleFreeLibrary.org and put your location in the Search box. LFLs will probably pop up all around you. Some even include interesting details. Here’s an example from one of the LFLs in Woodstock, this one on Main Street:

The Little Free Pie-Brary is located outside a cozy little pie shop in a growing Georgia town. This Pie-Brary came to be with the simple, kind gesture of a customer who shared some books with the employees. They thought about making a little library for the office, but instead decided to make one for the community to share. This library became a part of our “30 Days of Kindness” Project, where Day 5 celebrated “Take A Book, Leave A Book.”