Love of Freedom and the Path to Citizenship 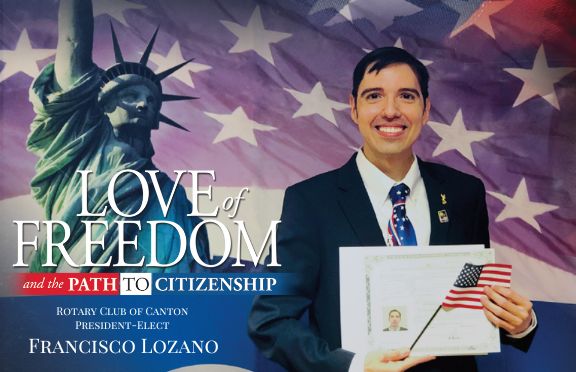 Many people born in other countries choose to earn citizenship through naturalization, a long and sometimes challenging process. Woodstock resident Francisco Lozano is one of them.

Reaching his goal of becoming a United States citizen on February 23, 2019, was a life-changing opportunity for Francisco Lozano who was born in the seaside town of Mazatlán on the Pacific Coast of Mexico.

Francisco loves his new country for many reasons. He shares, “I love honoring our veterans and heroes. I love celebrating our holidays. I celebrate the Fourth of July with family and friends; I enjoy fireworks, parades, patriotic concerts, and eating watermelon. I love our national anthem, ‘The Star-Spangled Banner,’ and the songs ‘America the Beautiful,’ ‘God Bless
America,’ and ‘God Bless the U.S.A.’”

Francisco first came to Cherokee County twenty years ago when he traveled from Mexico to attend Reinhardt University for the 2002-2003 school year as a Georgia Rotary Student Program [GRSP] Scholar. GRSP was founded in 1946 with a mission to help foster peace and understanding throughout the world. Each year about sixty to seventy-five students travel from around the world to study at colleges and universities throughout Georgia and immerse themselves in American culture.

While at Reinhardt that first year in America, Francisco studied entrepreneurship, project management, global workforce management, and oil painting, among other courses. He also grew to appreciate all the positive aspects of living in America.

“During my year as a GRSP scholar attending Reinhardt, I noticed how compatible I was with American culture. I learned and appreciated how wonderful America really is. My best friends and mentors are American citizens,” Francisco explains. “I identified myself with the traits of Americans who love freedom and know how to work hard and smart for their dreams.
At Reinhardt and through the Rotary Club of Canton I made many friends who quickly embraced me. They became my American family.”

At Reinhardt Francisco earned a 4.0 GPA and had perfect attendance at the weekly meetings of the Canton Rotary Club. He became involved in numerous projects and community organizations. 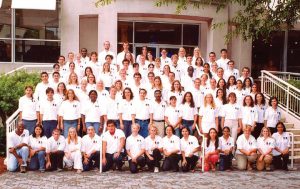 ABOVE: The Georgia Rotary Student Program [GRSP] Class of 2003 poses for a class photo (Francisco: front standing row, seventh from left). The program has hosted over 3,600 students from 108 countries around the world since its inception in 1946.

Fellow Rotarian and Canton City Councilwoman JoEllen Wilson has been a friend of Francisco’s for twenty years since first meeting him at Reinhardt, where she was vice president at the time.

JoEllen says, “Francisco and I became acquainted when he came to Reinhardt College as a recipient of the Georgia Rotary Scholarship. As a Rotarian, I invited Francisco to ride with me to weekly Rotary meetings. On those seven-mile trips from Waleska to Canton, we learned much about each other. For instance, he would often have some type of creative surprise for me—an origami flower, a small watercolor painting of a bird, or a poem written just for me! He learned and was amazed that I could drive and put on makeup and wave at friends at the same time. He gave me the honorary title of Rotary Aunt Jo. He is my Rotary Nephew Francisco. I am so proud of him.” 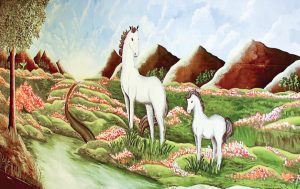 ABOVE: Francisco led the project of painting the mural, titled &quot;Transformation,&quot; at Waleska’s Mountainbrook Academy with a group of student volunteers in 2003 as a way of showing his appreciation to the community.

An accomplished artist, Francisco volunteered to paint a large mural at the Mountain Brook Comprehensive Academy in Waleska where he taught drawing and painting to the children. JoEllen remembers that project. “Francisco was given permission to paint a mural for students with disciplinary issues. As a talented artist he conceived a mural that students could assist in painting. That educational and sociological growth mural depicts a large and small horse, and it touched students in a way that ordinary pedagogy could not. We all had a ball painting together.”

“I love America because it is a beautiful and extraordinary country that was founded on the principles of life, liberty, and the pursuit of happiness. These are three principles that inspire me and give me a sense of purpose,” Francisco explains. “Our land, art, culture, and history are rich,” he says of the United States. “The determination, kindness, and courage of
Americans are remarkable. We are a country of brave individuals who make the world better.

In 2007 Francisco began the process to become a U.S. citizen. He recalls, “My journey to citizenship took almost twelve years. I held professional work visas for six years then I was a permanent resident for six years until I became a citizen. I am so happy and proud I did it! The honor of belonging to the land of the brave and home of the free. The confidence of knowing that this is my home too. My heart is filled with the pride of knowing that American culture, traditions, and history are mine as well.”

Becoming a citizen was a lengthy process that required substantial effort and patience, but Francisco says it was all worth it. “Demonstrating that I could make a special contribution to our country through my professional qualifications could have been a challenge, but I approached it as an opportunity, just as my American mentors would have approached it.” 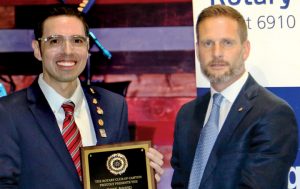 ABOVE: Rotary Club of Canton past president Shane Moore presents Francisco with the 2021 Coxe Rotarian of the Year Award which recognizes outstanding service. Francisco is credited with breathing new life into the club’s Family of Rotary activities and events as its chairman.

Francisco invested substantial amounts of time, money, and effort throughout the process. “I traveled multiple times to consulates in Mexico to renew work visas. Those consulates were far away from where my family lives in Mexico, so it was not possible to see them sometimes when I traveled there. However, I understood all along that I was applying for
a serious and big honor, a life-changing opportunity, so I gladly complied.”

When Francisco looks back on the journey he points to his first mentors: members of the Rotary Club of Canton who served as his host family and his friends during his year at Reinhardt. “I had a wonderful American host family as part of the GRSP program, Jim and Kay Gilmore, who lived in Ball Ground and served our country in many ways. They showed me beautiful, traditional aspects of America. I have many fond and fun memories of them,” Francisco shares.

For a portion of his first year, he also lived with Bob and Denise Robinson of Woodstock. “Although they were not my official host family within the program, they adopted me as well. The kindness, love, and generosity of the Robinsons made a tremendous positive impact in my life, and I am forever grateful to them. They did not only host me as a student, but also treated me as a member of their family. I had my first job opportunity in America at their staffing company.”

Francisco says both families helped him to be a good citizen by their examples. “I was inspired by their love for America, their Christian values, and the countless ways in which they helped our community and served our country as entrepreneurs, citizens, and philanthropists.”

Today Francisco is the business intelligence and data analytics manager in the Research and Development Department of Arylessence in Marietta, the largest privately held fragrance company in North America. He is also studying to be a perfumer to create fragrances. His expertise includes the chemistry of fragrance, sensory evaluation, gas chromatography, and mass spectrometry.

Francisco is the president-elect of the Rotary Club of Canton, where he has had a significant impact on the club’s success and served in numerous leadership positions. He will serve as president for the Rotary Club’s 2023–2024 year. He is also a board member at Children’s Haven of Cherokee County.

Inspired by the efforts of many generations of Americans who have built, served, and protected our country, Francisco says, “Their bravery, kindness, and generosity gave me the opportunity to enjoy this amazing country and join as a citizen with all the rights and responsibilities as well. I am inspired to give back to America through my work, my service to our community, and striving to be the best citizen and person I can be in all aspects.”