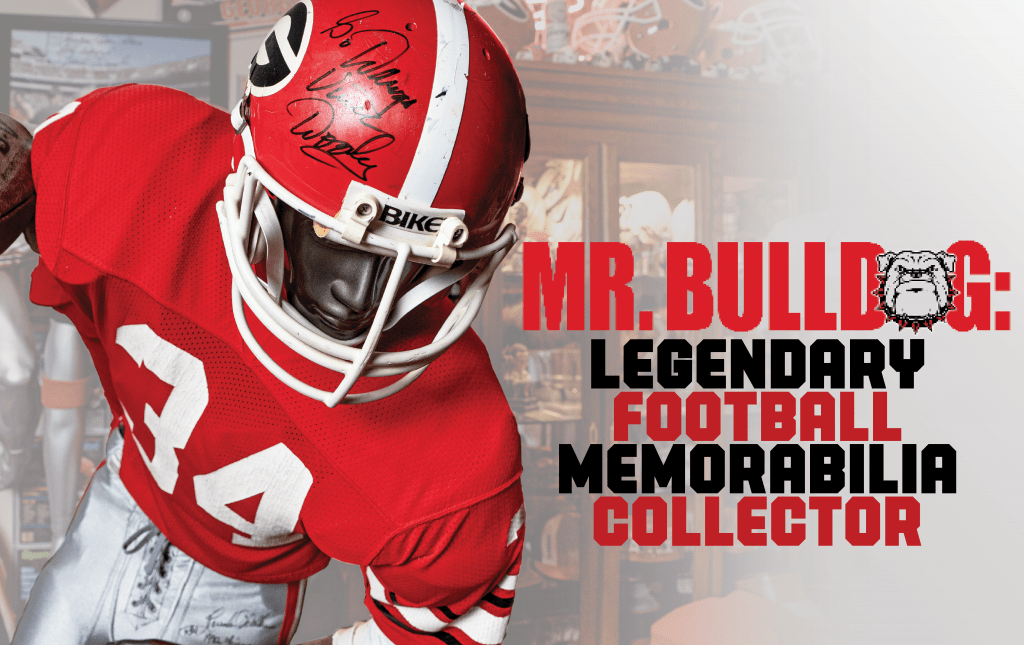 By Dennis and Leana Conway

In a suburb somewhere in Cherokee County sits a house with an exterior that tells no tales of what treasures lie within.

A man we shall refer to as Mr. Bulldog, for security reasons, owns the house, and it holds one of the best collections of Georgia Bulldog memorabilia around. Only friends are allowed inside, but Enjoy Cherokee Magazine was able to procure an invitation through connections. Since our readers cannot tour the house, we will give you a peek inside.

Like the families of many little boys who grew up in Georgia, Mr. Bulldog’s entire

family comprised Dawg fans, and he had a pennant of the team on his bedroom wall. He dreamed of owning more souvenirs when he was older but could not have imagined the collection he would come to acquire.

In 2012 Mr. Bulldog was thirty-four when he started collecting his team’s memorabilia. He bid on a print of the team at an auction. He won, but he had trouble getting the owner to complete the transaction. Mr. Bulldog went to the seller’s house out of frustration and announced he was there with the cash to get his purchase.

Although in a good neighborhood, the house was in a state of disrepair. After a brief interaction, Mr. Bulldog took his purchase and left, but homeowner Keith Contarino followed him out. Keith wanted to chat about his favorite Georgia Bulldog memories. Keith’s favorite memory was the “Run! Lindsay, run!” play from 1980 against the Florida Gators. 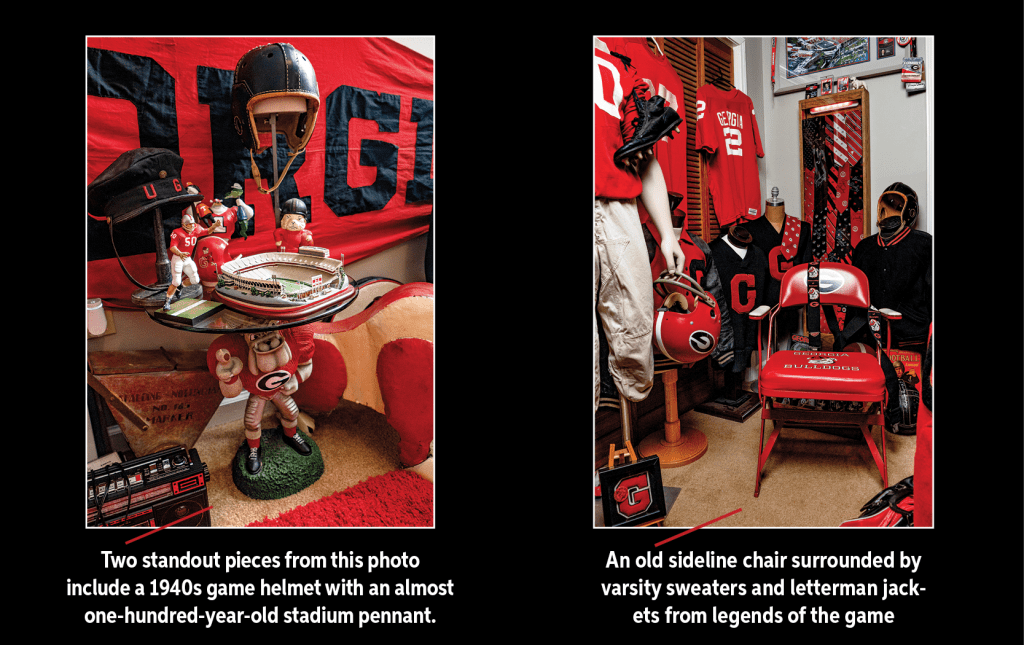 Mr. Bulldog regaled Keith with the story of when he attended the 1998 Peach Bowl on New Year’s Eve against the Virginia Cavaliers in Atlanta. At that time Mr. Bulldog was a rambunctious twenty-one-year-old hyper-energetic UGA fan with enough charm to talk his way into an invitation to watch the game from the visiting team’s president’s box. The offer was extended with a stern warning to behave. The first half was rough for Georgia and even rougher for Mr. Bulldog, as he was asked to take his enthusiasm elsewhere.

The halftime score was 0-28. Georgia had a lot of yards to recover, and Mr. Bulldog needed a different seat. He chose to cheer for the Dawgs from the Virginia student section. As one might imagine, Mr. Bulldog endured some “college spirit abuse” while submerged in the visiting team’s student section and was escorted out of the stands to take a breather more than once. At the end of the game Mr. Bulldog exited the stadium unscathed and the Dawgs took home an exciting 35-33 victory.

When Mr. Bulldog finished telling his story, Keith looked at him, astonished, and said, “I remember that game. I was in the section beside the Virginia Cavalier students. I couldn’t believe you kept going back to their student’s section. Ha! In 1980 I went to a Georgia versus Notre Dame game wearing a lewd T-shirt and had a similar experience. You are a younger version of me. Come back in the house; you’re going to want to see this.”

Reluctantly Mr. Bulldog went back inside the house and Keith showed him to the basement. The basement was organized, although a broken picture on the wall had left shards of glass on the floor. To Mr. Bulldog’s astonishment, Keith had a wealth of Georgia memorabilia tucked away in boxes. Keith told him to take something home, because he could see Mr. Bulldog was a true fan.

A friendship was born, and the two men began meeting at Mellow Mushroom and talking Georgia football. During their talks Keith told Mr. Bulldog that someday the collection was all going to be his, because he was the biggest Georgia fan Keith had ever met. Mr. Bulldog would also learn that Keith had struggled with depression and mental illness for years.

After about a year of friendship, Keith called Mr. Bulldog and asked to meet up again. To Mr. Bulldog’s surprise, Keith had his entire memorabilia collection in his truck. Keith asked Mr. Bulldog to store it for him. Keith said things were stressful at home, and he wanted his collection to be safe.

Mr. Bulldog left for a week-long vacation. The day after he returned, Keith’s son told him that Keith had taken his own life. He had indeed left all his Georgia memorabilia to Mr. Bulldog.

Keith’s collection became the beginning of Mr. Bulldog’s collection, and from there he has filled it in with missing pieces and many new ones. Some items have required years of negotiating and dealing to obtain, while other treasures have practically fallen into his lap.

When you enter Mr. Bulldog’s home, the first thing you see is a striking black bar with black and red bar stools. The seats belonged to UGA’s first national star and one of the most celebrated athletes in Georgia history, Charley Trippi.

Trippi was a quarterback, running back, and defensive back for the Bulldogs from 1942 to 1946, with a year off in 1944 to serve in the Army Air Corps. At ninety-nine, Trippi is the oldest living member of the Pro Football Hall of Fame. Charley bought the stools with his first NFL paycheck with the Chicago Cardinals.

If bar stools could talk, these would have remarkable stories. Some famous buttocks that have rested on the seats belonged to celebrities such as Joe Namath, President Harry Truman, and of course, many UGA legends who enjoyed sitting together, reliving victories, and reexamining defeats.

The oldest of Mr. Bulldog’s University of Georgia memorabilia dates back to 1929, a lime athletic field marker and a giant pennant from Georgia’s first game in the newly constructed Sanford Stadium in which the team played Yale University. For years the pennant resided at the University of Georgia until some Georgia Tech students stole it and put it up at their frat house. The story is that a young man from UGA who was dating a Georgia Tech coed stole it back. It seems all is fair in love, war, and football.

You cannot talk about Georgia football without mentioning Larry Munson, the legendary play-by-play radio announcer for the University of Georgia from 1966 to 2008. He had unique ways of describing plays that forever immortalized them in college football history. Mr. Bulldog has several of the pieces connected to Munson’s most famous calls.

The infamous “Hobnail Boot” game refers to a last-second touchdown pass from quarterback David Greene to Vernon Haynes that shocked the University of Tennessee, giving Georgia the victory in 2001. No fan can forget Larry Munson yelling, “We just stepped on their face with a hobnailed boot and broke their nose. We crushed their face!” Mr. Bulldog has David Greene’s and Vernon Haynes’s complete uniforms from that day.

Mr. Bulldog lights up like a proud father when displaying a one-of-a-kind watch. After winning the 1980 National Championship, every member of the team was given championship rings, but the university gave Larry Munson a watch. Eventually people became aware of the discrepancy and demanded he too be given a championship ring.

In an unbelievable twist, many years later Mr. Bulldog found a box of stuff from Munson’s estate at a flea market. It had all sorts of his papers, including his divorce papers, and at the very bottom was the watch that was engraved “To Larry Munson, Georgia Bulldogs, 1980 National Champions.”

Mr. Bulldog owns a home maintenance company. One day he had several appointment cancellations that led him to meet an older gentleman not on the day’s schedule. The man noticed Mr. Bulldogs’ license plate, UGALUVR, and they started talking. The man said, “You know, I was Herschel Walker’s pharmacist for years, and I have a pair of his cleats, the last ones he wore as a college athlete. My wife has been asking me to get rid of them for ages. Would you like them?” Mr. Bulldog gave them a generous discount on their bill and was on his way, astounded by his good luck. 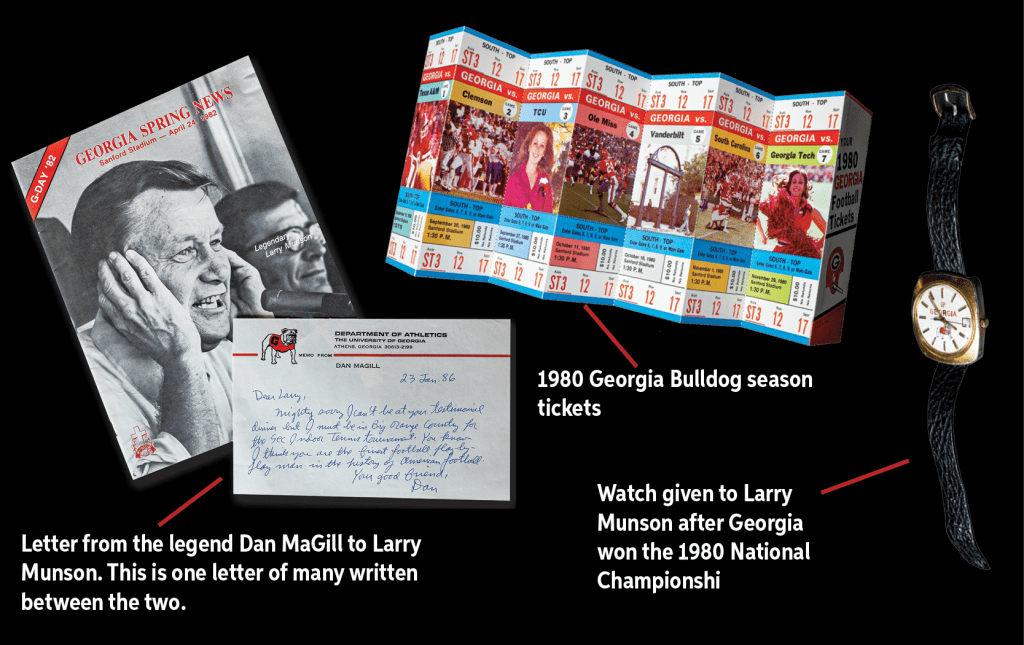 There is much to talk about in Mr. Bulldog’s ultimate man cave. Fifteen full-sized mannequins in full original uniforms are arranged to watch the game day with you, players such as Bill Goldberg, David Pollack, DJ Shockley, Champ Bailey, Hines Ward and even Vernon Hayes in his 2001 game-worn uniform.

Mr. Bulldog has the football from the flea-flicker play of the 1965 game against the University of Alabama, one of the greatest plays in Georgia football history, plus many more footballs, jerseys, newspaper articles, bobbleheads, posters, and such. The house is truly Bulldog heaven.

Legendary coach Vince Dooley’s presence permeates the air throughout Mr. Bulldog’s house. During Dooley’s years as head coach, UGA won six SEC titles and a national championship. More than Coach Dooley’s relics saturate the space; his attitude does too. Mr. Bulldog met Vince at a banquet dinner. Vince heard that Mr. Bulldog had brought the famous cleats from the “Hobnail boot” call, so Vince called Mr. Bulldog up to the stage with the cleats during his interview with an 11Alive sportscaster.

Another friendship blossomed. Mr. Bulldog now works as Coach Dooley’s home maintenance professional. More than their professional relationship, though, the two men have built a friendship, and Mr. Bulldog sees Dooley as a role model and mentor. He says, “I work so hard and go the extra mile every day, even when I am tired, because I think of what Coach Dooley would do.”

Vince has given Mr. Bulldog Japanese maples out of his yard, many memorabilia items, and more importantly, life philosophy and friendship. Like his hero, Mr. Bulldog has various interests. In addition to cheering on the Dawgs, he is an accomplished photographer, collector of music, and amateur landscaper.

Mr. Bulldog says, “I am a Georgia Bulldog fan because of the pageantry, the traditions, and the history of the game. If you go to Athens, Georgia, for a game and see the tailgating outside, the sea of red, go into the stadium and hear the Red Coat marching band and 94,000 fans screaming for their team, it’s hard not to be a fan.”

When asked what single piece of memorabilia he would run back into a fire to retrieve, Mr. Bulldog’s answer reveals the spirit behind wearing a Bulldog jersey. “If I could save only one item, it would probably be the jersey of number forty Walter ‘Chief’ Ruark. He was a true American hero, the most underrated, unknown Bulldog ever to play the game.

He played on the same team as Frank Sinkwich and Charley Trippi in 1942 that led Georgia to an eleven and one record and a victory over UCLA in the Rose Bowl. After the Rose Bowl, he joined the U.S. Army. In 1944 Ruark volunteered to lead a patrol in Belgium to engage German Snipers. Ruark took the lead so he would not expose his men. Ruark was killed by a sniper, sparing the men behind him. Walter Ruark was awarded the Silver Star for his selflessness and bravery. Besides leaving a wife behind, he also left a daughter who would never meet him.”

Mr. Bulldog’s love for his team has shaped his life. Being a Georgia fan and avid memorabilia collector has made him friends he would never have met otherwise and taken him places he would never have seen. He has also met many of his heroes of the game, who continue to inspire him.

In the future, if you see a guy at an estate sale or flea market with a Bulldogs shirt on and his head in a box of what looks like trash, it might be Mr. Bulldog searching for his next treasure.