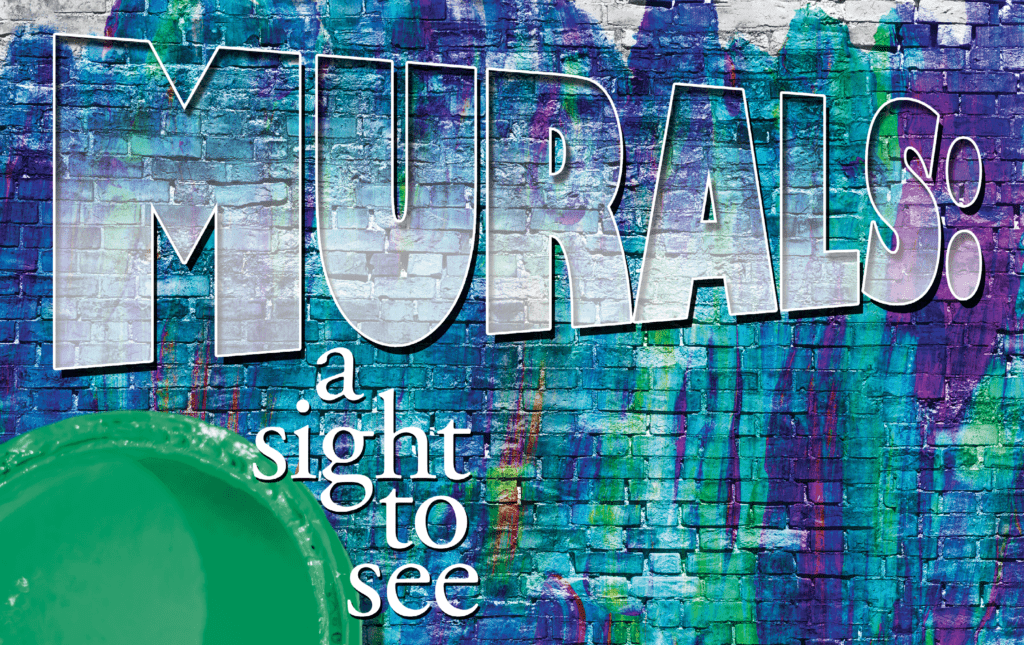 A stroll through historic downtowns in Cherokee County offers an array of public artwork that captures each city’s distinct flavor, tells a story, and honors history. Murals enliven and transform walls in Woodstock, Canton, and Ball Ground and bring joy to the folks who spot them.These latest public art offerings join others around the county in transforming old spaces and reminding viewers that life is full of unexpected happiness, even in the hardest times.

In an alleyway named Wall Street, muralist Sage Recchia painted Woodstock Wings on the side of an old cotton warehouse in summer 2020. The mural honors children fighting cancer as well as the families of children fighting cancer. The brick warehouse is now the office of Fathom Realty. Owners Anita and Ken Corsini had the mural painted following their experiences when their son Rocco was diagnosed with cancer.

“If you look at the wings close up, you can see words like ‘hope’ to inspire those fighting cancer,” says Kyle Bennett, tourism manager for the city of Woodstock. The mural is painted directly behind the Woodstock Visitors Center, where Kyle’s office is located. The interactive mural invites visitors to pose with the wings and participate in honoring children with cancer.

The Corsinis are the stars of HGTV’s Flip or Flop Atlanta, but their world was rocked in 2014 when their son was diagnosed with Burkitt’s lymphoma, generally considered the most aggressive form of cancer. It requires an aggressive treatment plan, Anita notes.From their experiences battling the disease, the couple founded Roc.Star Kids, a nonprofit foundation to help fund research and assist other families going through the same crisis. “We were challenged in a big way when our son, Rocco, was diagnosed with cancer. There is nothing that rattles you like a child who is sick and helpless. It’s frightening and take-your-breath-away scary. You are at the mercy of strange doctors who talk scientific medical talk, and you just shake your head and pray they know what they are doing and save your child. Through this difficult journey we gained a lot of perspective and readjusted our course on a lot of things in our hearts,” Anita reports in her blog on the couple’s website.

The son’s treatment was eventually successful, but the experience led the couple to want to help others. “Forty-three children are diagnosed with cancer each day. It isn’t as uncommon as you think. And it’s awful, it’s unbearable, and I wish I could make it all go away,” Anita writes. “Unfortunately I do not have that power. However, we do have the ability to help in the fight against childhood cancer—to help fund research for the development of new drugs that have fewer side effects—to help doctors create tailored treatments for children, because none of them are the same—to love and support families who are in the thick of extremely difficult and trying times. Unfortunately we know firsthand how difficult this journey can be.”

When strolling along Railroad Street by the old Canton Cotton Mill built in 1899, now The Mill on Etowah, will be sure to enjoy the striking mural along the sidewalk.

For Canton City Councilor Brooke Schmidt, who is heading up an effort to bring more public art to the downtown, the mural has many purposes. When asked about the growing popularity of murals and other art along city streets, she says, “Public art installations, and especially murals, have an almost magical ability to bring together varying groups of people in addition to being a key to economic development placemaking and for attracting visitors to a city.”
Brooke is instrumental in the city of Canton’s latest mural along Railroad Street, part of an initiative she says creates healthy and positive communities by driving traffic to area businesses, promoting tourism, building a creative economy, and improving civic pride and unity.

The Canton Main Street group put out a call for mural concepts on the Railroad Street wall, and Cherokee High School art teacher Shanna Coulter responded. Her design is a creative timeline of “legs through time.” Brooke points out that the selection team decided that using the wall to craft the story of Canton’s history was too good to pass up. The wall is only three feet tall but is 540 feet long. “The Railroad Street mural is a strong example of art revealing history. Shanna Coulter’s timeline concept takes viewers on a journey from the beginning of Canton through 2020. Without literal dates painted on the wall, time is shown by what people are wearing, what objects they are holding or standing with, the change from black and white to color, and more,” Brooke shares. A team of other Cherokee County art teachers worked with Shanna to bring the mural to life. “Such a bonus,” Brooke says, “to have an entirely local team of art educators share their talents in a meaningful and lasting way with the entire city of Canton. It’s powerful.” [wonderplugin_carousel id=”2″]

Canton is also home to a series of murals along North Street in downtown that internationally known mural artist Scott McIntyre, who resides in Canton, painted several years ago. The murals along the backs of buildings that face Main Street show the downtown as it once was, giving viewers a chance to imagine what once was, while also focusing on the present and future of historic downtown before many homes and businesses were torn down and replaced.
The murals were an early Main Street project, done along with the Cherokee County Arts Center.

Scott has been painting murals, illustrating, and doing decorative finishes for more than twenty-five years. With a bachelor of fine arts degree from the Atlanta College of Art, he has traveled as far as Amman, Jordan, to bring his painting and mural arts to clients and students.

In Woodstock the past and present meet along Mill Street in an arresting and entertaining mural that Annalysa Kimball painted in 2015. Replacing a mural that commemorated the city’s centennial celebration in 1997, which had been painted on a building that has been torn down, the newer mural features a number of scenes and even some familiar faces.

The Atlanta Regional Commission Public Art Program partially funded the mural on the wall of Woodstock Pharmacy. Woodstock historian Juanita Hughes, who is featured in the mural, points out that the wall chosen for this project has proven to be perfect. Before the artist could begin, though, the wall that covers the entire Mill Street side of the 1912 Woodstock Pharmacy building needed some repair and preparation, a process that took longer than expected. During the months leading up to the first stroke of the paintbrush, the community stayed involved. Annie visited various groups for input, even hosting an idea booth at Friday Night Live that included paint-mixing activities and opportunities to submit sketches. “And there were models,” Juanita recalls. [wonderplugin_carousel id=”2″]Kyle said that the city knew the old mural had to go away but still wanted a mural downtown. The city decided to take it in a new direction, while still honoring history. “The artist paired scenes of Woodstock’s past with now, like a farm scene from long ago paired with a scene from today’s Farmers Market,” he explains. Juanita says that once the actual painting began, the excitement grew, and the public was fascinated as more and more scenes appeared. “Although the finished product was worth the wait, I must admit that the journey has been enjoyable as well. Annie has worked diligently, even with setbacks from weather and allergies. It became a labor of love.”The artist felt the magnitude of the mural’s impact, Juanita says, and it brought her to tears at times when viewers offered encouragement and praise while she worked.

A building on Chambers Street is the site of a third mural in Woodstock, a giant postcard touting the city. It too is a popular spot for visitors to snap photos. The oldest mural in Woodstock, the artwork is the brainchild of artist Debbie Tidwell. The mural is often used as part of the city’s annual Scavenger Hunt, when participants team up to gather photographic evidence of their journey through one hundred locations around Woodstock.

“Debbie and a couple others owned an art gallery across the street from the wall,” Kyle recalls. They believed it would be a good spot for a mural. Debbie painted it about twelve years ago.”

Much has changed in Ball Ground since the early 1990s when now Councilman John Byrd painted a mural for the dedication of the city’s ballpark, after it was upgraded with help from Cherokee County.

The late Calvin Hill was mayor, and the late J. J. Biello and Dr. Rebecca Ray were county commissioners. Ball Ground was a quieter, less populated town then, and life was simpler. The spirit of the historic city remains the same, though, as it was almost thirty years ago, and the mural on the side of the visitor’s dugout still reflects what makes Ball Ground special. The ballfield was dedicated to the Ball Ground Lions Club that summer day, and the mural proudly commemorates the service organization.John, who owned a sign company in Holly Springs, donated his time and talents to paint the Norman Rockwell-inspired mural that has stood the test of time. At the time that he painted it, he said he did it because of his love of Ball Ground, and he “wanted to stay proud of it.”Whichever corner of Cherokee County you visit, make sure to find these outstanding examples of public art that celebrate the deep roots of our community.