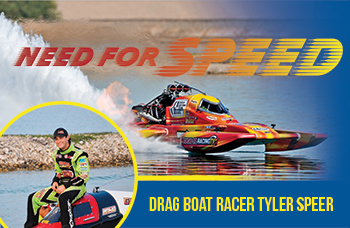 Etowah High School graduate Tyler Speer is a local professional drag racer. Reaching speeds of 250 miles an hour in just a thousand feet, drag racing is as intense as they come.

Tyler’s father, Tim, a champion racer in the late 1970s and early 1980s, passed his passion for acceleration down to his son. Tyler’s passion started when he was young and has taken on a life of its own. 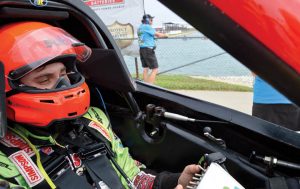 A passion for speed sparked Tyler’s interest in riding motorcycles at the age of five. He became an active member of his father’s pit crew at the age of nine. Tyler explains, ‘‘I began racing go-karts across the street from the Proboat shop when I was nearly eleven years old. Racing stock cars became another hobby once I turned fourteen and could get a license. I didn’t race my first drag boat until I was twenty-three, around the same time I graduated from Kennesaw State.’’

Racing is a family affair. Tyler’s father won the 1986 High Points Championship for the United States Drag Boat Association. Although he still jumps in the seat every now and then, he leaves his racing number for Tyler to use—410—after having taught Tyler everything he could. The father-son duo now prepares for upcoming races and strategizes on how to win championships.

When a friend from Tim’s racing days reached out needing a distributor for jet boat parts, a spark was ignited for the creation of Proboat. The company, started in 1988, was a small operation at first, until more than thirty boats began overtaking the Speers’ backyard. In seven short years, Tyler’s mother, Terri, jumped on board to help run the business, even closing her beloved boutique in Canton. Today Proboat serves customers from all over the country. The business specializes in the complete remodeling of engines and interiors and is capable of all levels of marine repair. With a bachelor’s degree in sales and a minor in finance, Tyler was well-equipped, in more ways than one, to join his family business. 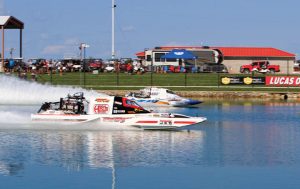 From boats to older model cars, Proboat looks like an eclectic collection of high-speed toys. Each boat and car holds a history or profound story, whether it merely be a project the Speers are working on for a friend or a client’s boat they are completely remodeling.

Tyler points to a faded yellow-orange boat hanging on the wall and announces, “Shockwave was the first top-fuel boat I ever ran. We can’t race it anymore because a piece flew out of the bottom and stripped the rail, almost causing the boat to flip.” The incident is evidence of the intense amount of power being pushed through an engine on each pass of a drag strip.

Shockwave holds a special place for the Speers, not only because it was the first boat Tyler raced, but also because in 2018 it set the Elapsed Time World Record at 3.10 seconds. Though Shockwave is no longer race ready, it serves as a trophy at Proboat, Tyler’s first year winning the World Record in the Lucas Oil Racing Series in Top Fuel—the fastest class achieved in drag boat racing. Another World Series Championship followed in 2018, in the Pro Outlaw division. Overall, the Speer team has won four championships since its start in 2014. Though Tyler holds the world record time currently, he and his father hope to cut it down below three seconds. Tim and Tyler agree that it is no easy task to shave off even one-tenth of a second. The high-power engines produce ten thousand horsepower to reach these impressive speeds in a few seconds.

A decade ago drag boat racing wasn’t consistently producing a strong audience or television presence, which explains why many people aren’t familiar with it. Tyler claims that when the Lucas Oil Drag Boat Racing Series was created in 2010, all the races at the largest track, in Wheatland, Missouri, became televised and promoted. Now audiences can watch all of Tyler’s races since 2014 on MavTV.

The hierarchy of the racing classes is quite complex, with Pro Modified boats running at the bottom with speeds of 160 to 170 miles an hour. Pro Outlaw lies a step above at 175 miles an hour. Following shortly after is Top Alcohol Hydro, which runs around 200 to 210 miles an hour. The top of the pyramid holds Top Fuel Hydro, the class Tyler currently races in, which run up to 250 miles an hour.

With all the long nights and hard work involved, some might think the boats are sustainable for a long period of time. Tyler refutes this myth by explaining the intense processes it takes to race these boats. What makes Tyler’s team different from its competitors is its ability to strip and rebuild motors in an hour after every run. Given that the team is largely made up of friends, family members, and fellow racing fanatics, the familiarity with the motors comes second nature. 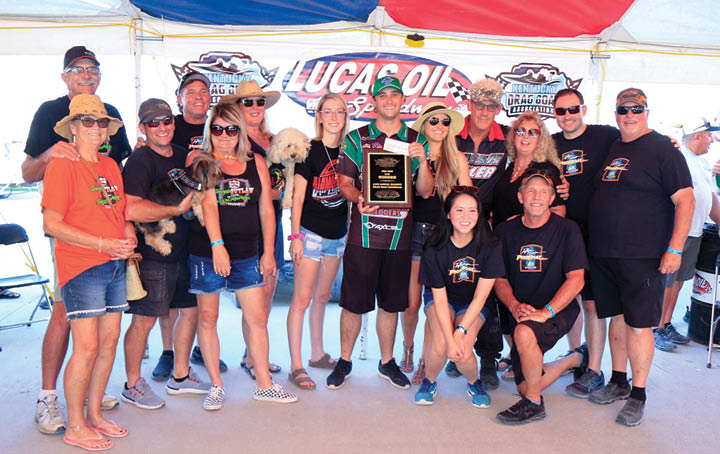 Tyler’s team is also special because of its ability to build, test, and hone these boats to perfection right in their backyard—the same shop that has performed boat repairs for decades. Although team members don’t do the bodywork themselves, they construct every aspect of the engine and interior, from pistons to wiring. Tyler has lived around boats his entire life and knew much more about mechanics at a young age than most people do in a lifetime.

When preparing to reach top speeds in three seconds, there is no room for error, yet Tyler never practices. He explains, “With drag racing or stock cars, it’s possible to rent a track for practice. In drag boat racing it just isn’t possible because divers, rescuers, and many other people are required to be present for the safety of the event. Our solution is to bench test everything, then go to the race and hope it all works.”

To attend these races, Tyler and his family members are required to travel all over the country. They enjoy reminiscing about trip-related moments that always stuck with them, whether they are good ones or bad ones. Terri shared a story of when her son and husband flew to a racing event in a distant state. Drawing the short straw, she was left to lug everything in the spacious RV they use for their trips. She described in fits of laughter how a tire popped on the journey, causing a troublesome ride. The Speers wouldn’t change a thing, though, about long nights traveling from city to city watching Tyler achieve his dreams.

A kid chasing an adrenaline rush has transformed into a young man with a successful professional racing career. Although Tyler is far from his go-kart days, he has stepped into a new arena on the water, never losing his need for speed.

Emma Tyler is a senior AP/honors student at Cherokee High School nominated twice for the Governor’s Honors Program for literature. She is currently serving as an intern at Enjoy Cherokee Magazine and plans to pursue a bachelor’s degree in English or journalism in college.