Paying Homage to the Price of Freedom 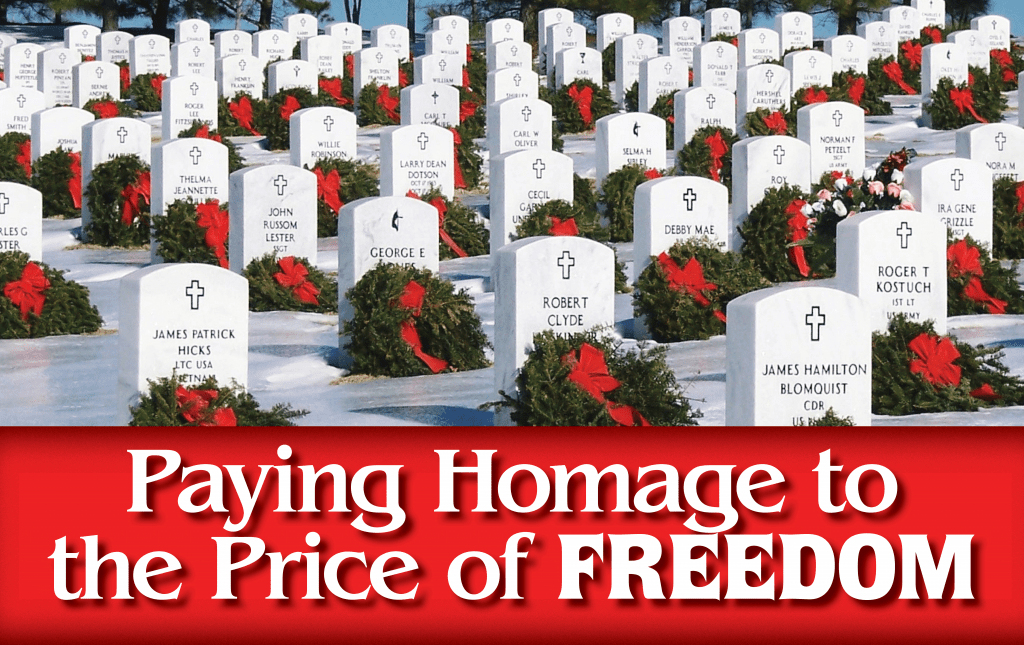 During my life I have been involved with many religious, civic, and veterans’ organizations, providing thousands of volunteer hours for various events and activities. Two such occurrences I will never forget. Both involved the Wreaths Across America program, a nonprofit group founded more than twenty years ago by Morrill Worcester of the Worcester Wreath Company in Maine.

My first memory took place in December 2009 when I joined a pilgrimage of friends and relatives from Atlanta to Arlington National Cemetery. There we united with more than four thousand other volunteers to assist in placing fifteen thousand holiday wreaths on graves that overlooked our nation’s capital. My eyes welled with tears as I observed thousands of citizens with a united purpose listen to a Gold Star mother profess her profound gratitude that fellow citizens would assemble each December to remember the sacrifice of her son and those like him. Through tears of sadness, I gave thanks to God for the privilege of being an American.

The second significant event occurred in 2011 when my wife of fifty-two years, Jeannie, and I had the opportunity to expose two of our grandchildren to the burial of a young U.S. Marine in Canton, Georgia. In December of that year, all four of our grandchildren placed wreaths in veterans’ cemeteries.

My career as a funeral director has afforded me the honor of assisting hundreds of veteran families who lay to rest heroes, including those who made the supreme sacrifice for our freedoms. However, the burial of a U.S. Marine Corps lance corporal killed in Afghanistan in January 2011 would be different.

The funeral home where I was employed coordinated particulars for the service. Arrangements included evening visitation with the family at the funeral home and a church service the following morning, followed by burial at Georgia National Cemetery in Canton. A few days earlier, the weather brought a rare but beautiful eight-inch snowfall to the area, much of which was still on the ground in the cemetery.

After much consideration, my wife and I decided that two of our grandchildren would join us at Georgia National Cemetery for the burial. We hoped the children would grasp a sense of patriotism and a degree of sacrifice as they experienced how U.S. Marines give a final farewell to a warrior who had given his all.

A friend and fellow funeral director from Canton, David Dunlap, and his young son agreed to join us on this meaningful occasion. Arriving after we did, the Dunlaps described Rockwell-like scenes of the funeral procession slowly passing through Canton and roadways approaching the cemetery. The hearse carrying the flag-draped casket of the fallen Marine displayed Marine Corps emblems on each side of the vehicle with American flags on each fender. The hero’s one-hundred-vehicle procession was escorted by Georgia State Patrol and other police vehicles from various jurisdictions. Near the cemetery, many citizens were holding American flags. Homemade signs with heartfelt condolences were displayed by many, including those my son and his wife created for our grandchildren to hold.

The procession made its way through the gates of this most hallowed place.  As the fallen soldier’s family arrived at the committal shelter, scores of Patriot Guard riders stood at attention alongside former and active duty Marine Corps members. The Marine Corps Honor Guard performed each move of the ceremony with absolute precision, including “Taps,” the ceremonial folding and presentation of the burial flag. Many tears fell.

After the committal service, an uncle of the fallen Marine approached our grandchildren and Dunlap’s son. The gentleman thanked the children for attending the ceremony and for holding the signs. The uncle explained how touched his family was by the gestures of the children. At that, my nine-year-old granddaughter asked the man if the family would like to keep the signs. The uncle promptly escorted our grandchildren to meet the father of the fallen Marine. The family graciously accepted the signs.

The goal to have my grandchildren grasp a sense of patriotism and a degree of sacrifice by a fallen soldier had come to fruition.

As we made our way to the car, we observed a most beautiful sight. Looking across the white marble in this garden of stones, we could see the beauty of holiday wreaths and snow that continued to adorn the grounds since mid-December. To me the wreaths were like green and red sentinels nestled in the snow, keeping watch over every headstone. I took a photograph with my camera, but the image will be engraved in my mind forever.

The following year, I purchased a children’s wreath kit from Wreaths Across America for each of our four grandchildren and Dunlap’s son. Each gift box from Maine contained a coloring book with the story of the wreath program, a red sock hat with a Wreaths Across America pin, and a certificate denoting a green wreath with a red bow would be sent to a veterans’ cemetery in their area.

When the second Saturday in December finally arrived, the children and their parents made the journey to their respective cemeteries for a short ceremony followed by the wreath-laying. Unfortunately I could not be with the grandchildren that day. Through the captured expressions of a camera lens, I could see the solemn, almost reverent, emotion of my grandchildren as they paid homage to a veteran with a simple wreath. These children made the world a better place and perhaps obtained some satisfaction in knowing that being a part of something bigger than themselves is the best work of life.

A version of this article was originally printed in The Director, a publication of the National Funeral Directors Association Services, Inc.

An amateur photographer and U.S. Navy veteran, James Walters received the 1991 George Washington Honor Medal for Community Service from the Freedoms Foundation, Valley Forge, Pennsylvania. Walters is a 1972 graduate of Gupton-Jones College and a former funeral director at A.S. Turner & Sons Funeral Home and Crematory in Decatur, Georgia. For those desiring to make a donation or volunteer to assist with the placement of wreaths each December, contact the nonprofit group, Georgia National Cemetery Advisory Council, Inc, at GAnationalcemetery.org.