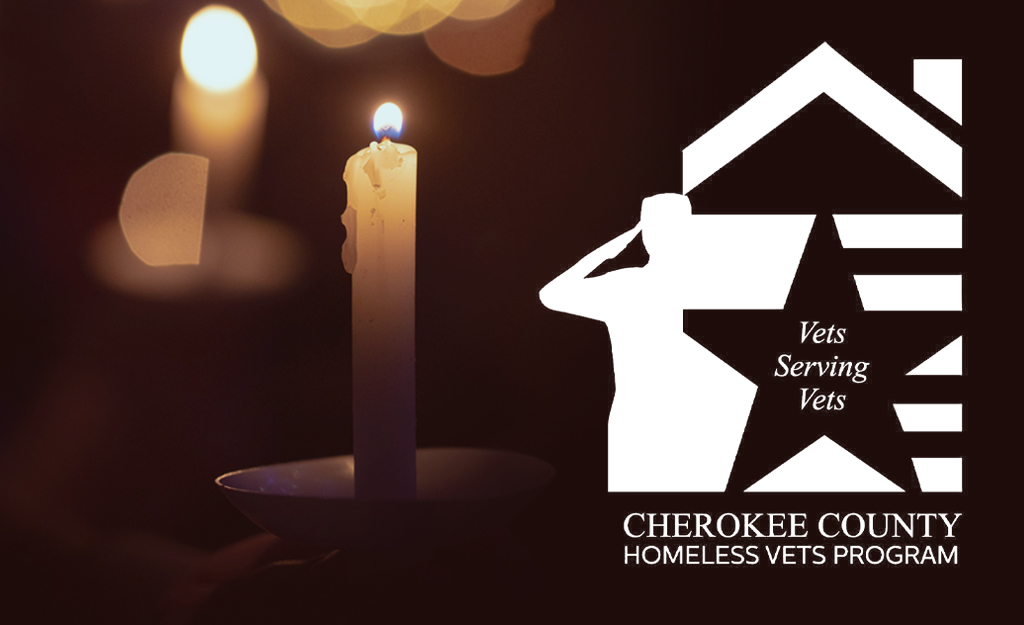 CANTON, GA (Dec. 8, 2022) – Presented by the Cherokee County Homeless Veterans Program, Homeless Veterans Candlelight Vigil set for sundown on Wednesday, December 21 at Cherokee Veterans Park in Canton.
​​​​​​​​​
Every night roughly 49,000 veterans find themselves on the street homeless. To put this in perspective, in 2018 there were roughly 8,400 U.S. soldiers in Afghanistan according to the Guardian.

This means that there are roughly 6 homeless veterans for every soldier who served in Afghanistan.

Homeless veterans are found all over the U.S. Here in Cherokee County, intake and processing of homeless veterans is up 32 percent from last year. Causing more concern is that homeless veterans outreach programs are seeing more female veterans—some with small children—as well as senior veterans, indicated Jim Lindenmayer, Director of the Cherokee County Homeless Veterans Program, who is also an Army veteran and graduate of the United States Military Academy at West Point.

On December 21, which is the longest night of the year, the Cherokee County Homeless Veterans Program will host their annual candlelight vigil remembering all of the veterans who are homeless during this night. The vigil is being held at the nation’s only homeless veterans statue which resides at Cherokee Veterans Park, located at 7345 Highway 20 East in Canton.

The marble statue depicts two life-size veterans—one male and one female—standing on a pentagonal base displaying insignias of the five branches of the military. Inscribed on the base is:

“No veteran who fights for this country, should have to fight for a job, a roof over their head, or the care they need when they come home.”

The phrase depicts the plight faced by many veterans in society today. The two statues do not display any rank, as veterans of all ranks are subject to being homeless. The Cherokee County program alone has assisted veterans from the rank of private to lieutenant colonel, and has covered every branch of the service, Lindenmayer explained.

The event is scheduled to take place at sundown which is estimated at 5:33 PM. The public is welcome and there is no charge for this event.

The Cherokee County Homeless Veterans Program is a 501(c)19 veteran nonprofit (EIN 58-6067723) and is part of the American Legion in Cherokee County. All program staff are volunteers and receive no salary. These volunteers consider it an honor to pay it forward to others that served our country honorably. The American Legion is the largest veterans support group in the U.S. with posts in 14,000 communities around the country with 2.4 million members. For more information, visit Legion.org.

Alzheimer’s Isn’t Stopping. Neither Are We.