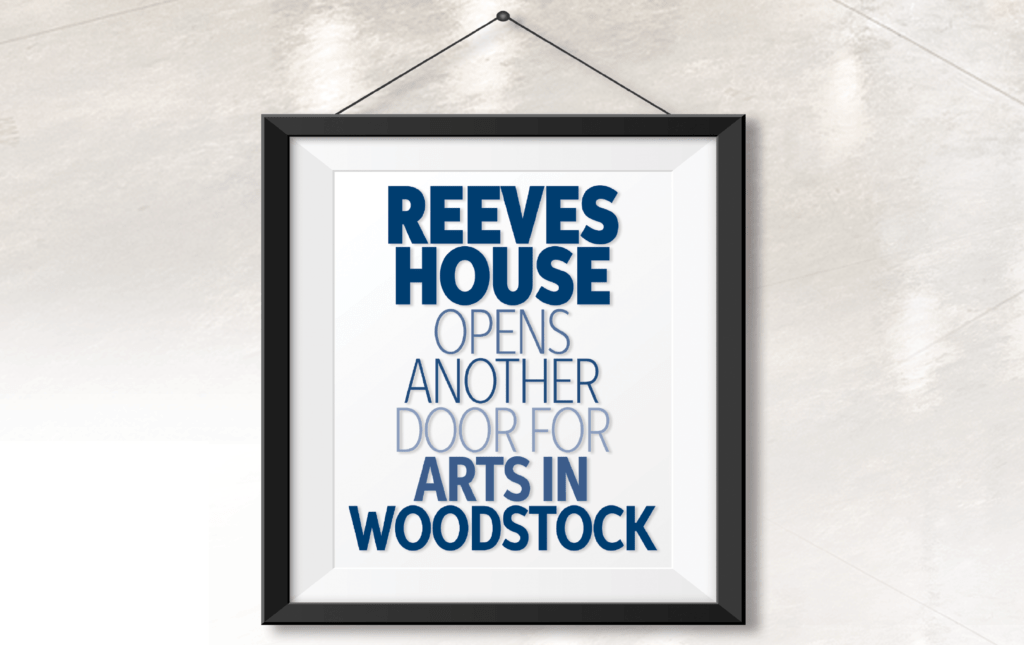 Reeves House Opens Another Door for Arts in Woodstock

The Reeves House is adding a new coat of paint on Woodstock history as the new visual arts center engages visitors in a plethora of experiences.The latest offering of the Elm Street Cultural Arts Village in downtown Woodstock features a gallery with rotating art exhibits from local, regional, and national artists in addition to classes and events, such as jazz nights and poetry contests. The coffee shop and wine bar is a perfect spot to start a conversation about art or just relax and unwind.“We hope this place will be a pulse for the community and a spark of inspiration,” Elm Street Executive Director Christopher Brazelton points out. “We think it will be. We also certainly hope it will be a catalyst for more visual arts and artists in the area.”

Christopher emphasizes that the mission of the Elm Street organization is to engage the community with relevant art experiences every day. “We focus on and gear all of our programming toward engaging community. We attempt to transform bystanders in the community into engaged community members.”The stunning rebuild of the former home of generations of Woodstock residents provides a spectacular canvas for the future while being reminiscent of the past, with its soaring, airy spaces filled with bright light.“Our exhibits rotate. About every six to eight weeks the entire gallery will transform and present a new exhibit,” Christopher explains about plans for the center that opened in May. “All these exhibits will have events paired with them. We will also have some events that are just fun and a chance for the community to gather, such as jazz nights, local artist spotlights, live drawing/painting nights, and so on. We expect a lot of activity and plenty of excitement.”[wonderplugin_carousel id=”2″]The first exhibit, which opened the gallery May 14, is called “[Re] Constructing Home,” an exploration of the literal rebuilding of the Reeves House. “It also gives a look at how we all had to transform our home in the last year and a half, as rooms became gyms, offices, and classrooms,” Christopher explains.The next exhibit will be “Women’s Work,” a celebration of women in the workforce. It will feature female-led innovative approaches to textile and fiber arts.Luther and Carrie Reeves built the original house in 1897 soon after they married, and the home became the centerpiece for the family’s fourteen-acre farm, according to Woodstock Historian Juanita Hughes. Luther and Carrie married on November 17, 1897, just days before the Georgia Legislature granted the City Charter on December 8, officially establishing the city of Woodstock and setting its boundaries, Juanita points out. When the couple built their new home, presumably soon afterwards, the house and its acres fell within the new city boundaries. The house was much smaller in those early days.

One of the couple’s children, Sam Reeves, the last of eight children born in the Elm Street Reeves House, left a valuable legacy for people interested in historic preservation. Juanita explains, “Although Sam and his wife had no children, the descendants of his siblings are fortunate to have his written account, Precious Memories of Mama and Papa, detailing life on an in-town farm in Woodstock during the early years of the last century. For a few years the little road leading to the house was called Reeves Street. The diagram in Sam’s book shows placement of the gardens, orchards, corn patches, a cow pasture, and outbuildings, including a garage/toolshed, smokehouse, woodshed, hen house, corn crib, barn, privy, and hog pen. Part of the property seems to extend to Mill Street adjacent to Mount Olive Church and the lot where Sam’s brother, Ross Reeves, later built a home.” The house itself saw many changes. Juanita shares information from the owner’s book: “The first three children the Reeves had were boys, and the size of the house was adequate. In 1905, however, the first girl, Anne, was born, which made it necessary to add a second floor.” Christopher explains that as the years went on, the Reeves family added project after project to the house, expanding it to the footprint and similar size of the rebuilt house today. [wonderplugin_carousel id=”2″]The Poor family moved into the home 1945, and several other families after that, until it eventually became vacant for decades, Christopher says. The site was the original catalyst to form a multidisciplinary art center and sparked several initiatives that merged into the Elm Street Cultural Arts Village. Architects at CDH Partners redesigned the house to its original footprint, fa”c” ade, and coziness, a true challenge, when also asked to design the space as an art gallery and classroom, Christopher remarks. The builders, JW Collection, he adds, “did an exceptional job in execution as well.” All materials in the barn door leading to the education studios were made from the original house, and the siding wood is specifically from that same wall. Foundation pieces from the original house are used as a header as you walk into the Juanita Hughes History Room, named for the local historian.

The stairs, although added when the Reeves expanded the original house, are located in the same space, again to match the footprint. The exterior siding of the house is mismatched to honor the original house and additions built in later years. Green space and an outdoor stage near the historic site has made the area a perfect spot for a wide array of events.“Everyone made a concerted effort to honor the history of the home while also creating a new space that would serve the community well. I believe we did that,” Christopher happily points out.The Reeves House Visual Arts Center is located at 734 Reeves Street in Woodstock. For more information visit ElmStreetArts.org.