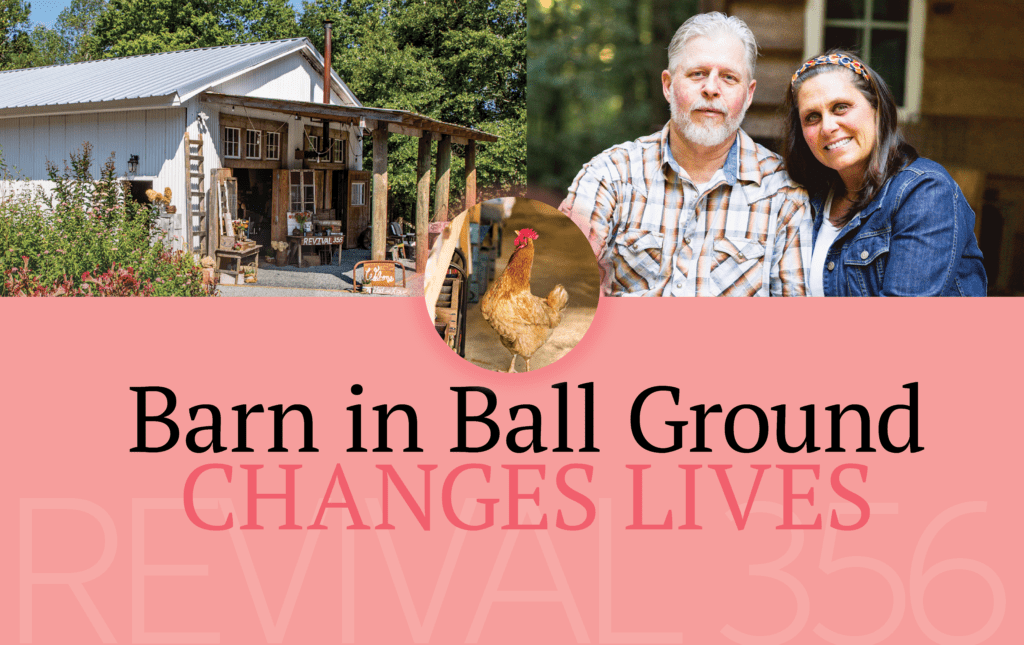 “You are loved. You are worthy. You are enough.” These words form the mantra at Revival 356, a retreat sanctuary in Ball Ground. Life coach Vikki Frakker and her husband Eric own Revival 356, where they have nurtured twenty-seven acres of idyllic rolling countryside since 2012. Vikki describes Revival 356 as “a place for women to connect with their spirit and heart and share the truest, deepest parts of themselves.”

The tranquil farm is also Vikki and Eric’s home, and it is a long way from the dark bottom Vikki had to hit to get there. Vikki is a delightful, quirky mix of Elly May Clampett, with critters following her everywhere, and Maya Angelou, because of her wit and wisdom. A luminous woman full of joy and purpose, she often has mud on her boots while the occasional goat drinks from the toilet in the barn where counseling takes place. Vikki’s story is full of the grace she carries through to each interaction on the farm. 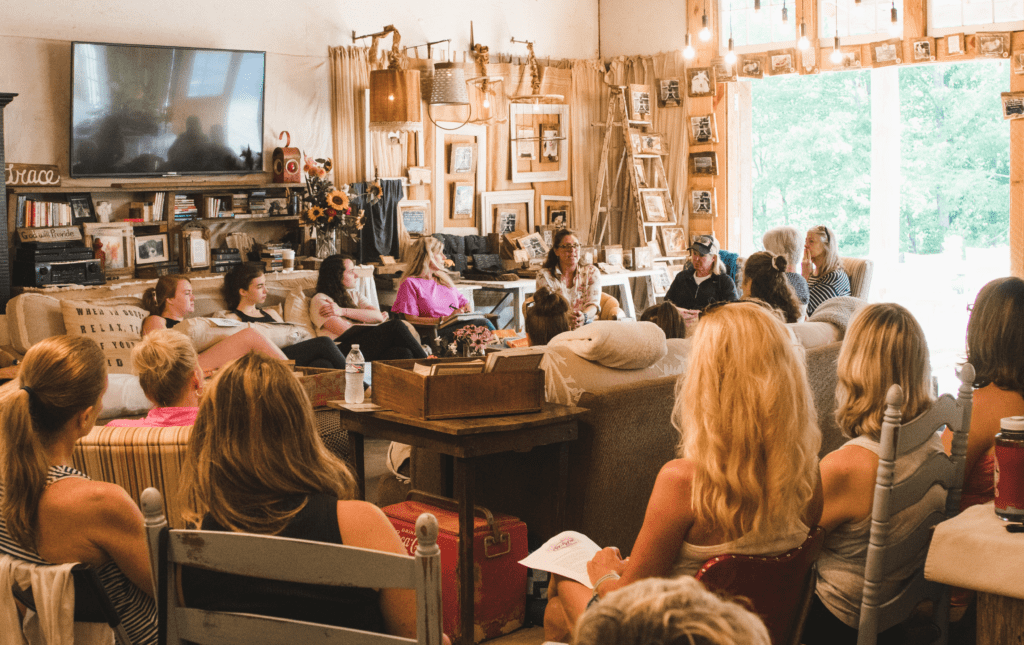 Vikki’s lowest point was finding herself face down in a rubber room in the New York State Psychiatric Institute. Vikki says, “I had been living a worldly, watered-down version of who I was born to be.” Addicted to steroids, which stemmed from competitive weightlifting, she also battled alcoholism and bulimia. “I was living a completely external life, desperate for people to see me and love me, because I did not see and love myself.” Her addictions, lies, and self-hatred landed her on a rubber mat in a suicide room.

The only thing that tethered Vikki to earth was her mother. Vikki recalls feeling desperate for death yet unsure and mindful of her mother. Vikki’s mother had raised Vikki and her sister alone and sacrificed so her daughters could have a better life. Like the umbilical cord that connected them when Vikki was in the womb, her mother’s love and sacrifice gripped Vikki, even when she thought she could no longer tolerate the pain of the world she had created. Lying in the psychiatric institute, Vikki felt her life burst open, her internal mess displayed to the world, and she was emotionally leveled. That devastation allowed her to reconstruct her life with truth. Pat, the counselor at the psychiatric facility, entered Vikki’s life at that pivotal moment. Vikki says she could write a novel about what Pat has meant in her life.

Pat went so far above and beyond her job description that it is safe to say she saved Vikki’s life. When Vikki expressed this sentiment, Pat explained that her own mentor had said, “One day you will meet a woman, and you are to give her everything I gave to you.” Pat saw Vikki’s name on her chart and sensed that Vikki was the woman to whom she should bestow that gift.

After Vikki was released from the hospital and able to return to Atlanta, Pat committed to visiting Vikki for five days every eight weeks. Pat kept coming to Atlanta for as long as it took for Vikki reach stability, both mentally and in her sobriety. Vikki has generous friends willing to pay the expenses for Pat to travel back and forth from New York. Pat, however, insists that her visits are gifts and refuses to take any money. Pat and Vikki are still working together. 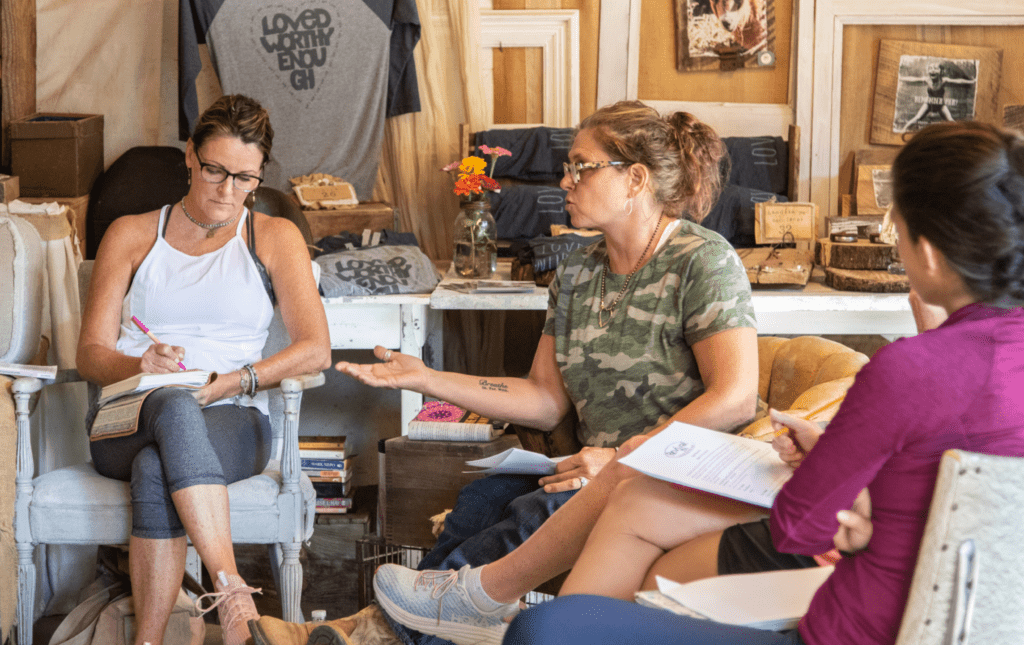 The serendipitous meeting and many other acts of God’s grace have helped Vikki move forward in her recovery. At forty-two, she married Eric. Vikki describes Eric as the love of her life and the rock that grounds her. Eric works in corporate America and qualifies as a “city boy,” but since he has been with Vikki, that description has changed.

Vikki continued on the path of sobriety with a goal of honoring her spirit and sharing it with the world. Part of Vikki’s recovery has been rediscovering who God has created her to be. Stripping away the addictions and need for external validation, Vikki once again could hear what made her heart sing—animals, nature, and creating. Vikki needed a space where those things could thrive.

In 2012 Vikki and Eric looked for a location in the country where Vikki could offer life/spiritual counseling. They found property in Ball Ground but were leery of all the work it needed to become a farm that suited their purposes. The owner was in desperate need to sell the property, though, and both Eric and Vikki felt led to buy the space that is now Revival 356. When the couple moved into the house, it had mold and no air conditioning. The barn was not visible from the house, and six horses huddled inside a crumbling fence. The journey began. Bringing Revival 356 to life was a massive struggle emotionally, physically, and relationally.

Even today managing the property is a struggle, but with prayers, hard work, miracles, and tons of volunteers, the farm has come far. Today Revival 356 provides life coaching, book studies, workshops, event rentals, and women’s retreats. In these uncertain times Vikki had to change her approach. Vikki and her kindred spirit and cocreator Amber Davenport created Farm 2 Souls, an online platform for book studies, online group coaching, and daily digital encouraging words and images to elevate the soul. 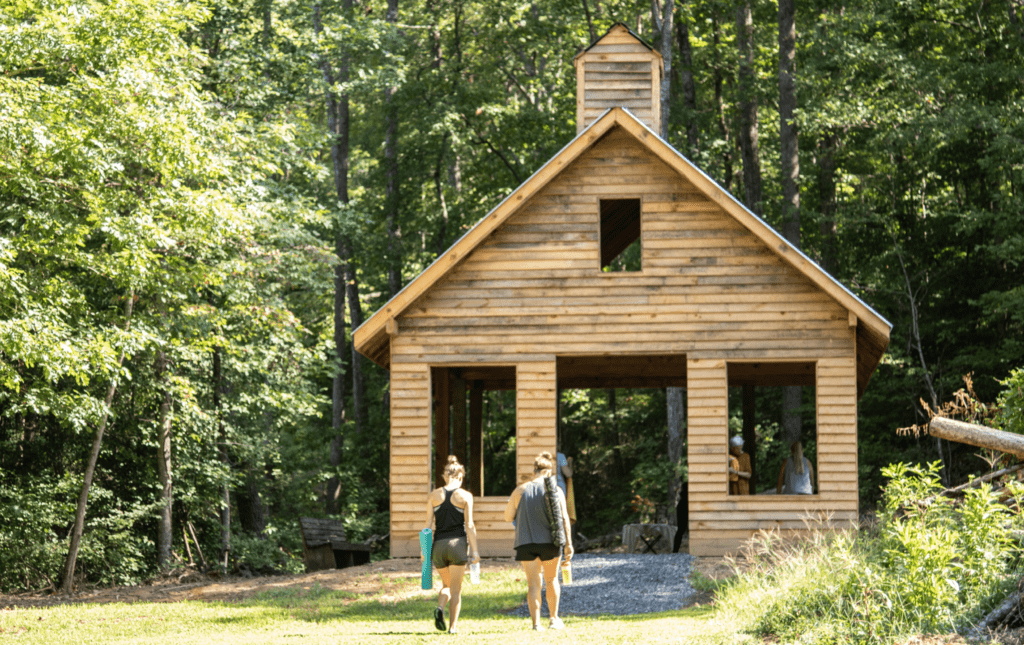 Anybody in recovery will say they are always actively in recovery. Vikki’s philosophy is that God brings people together who need each other equally. Her work is a mutually beneficial conversation with people who come to the farm. Vikki continually works on being in harmony with what God meant her to be. She senses that her divine purpose is to help other women connect and find harmony with their own truest selves.

Vikki wants Cherokee residents and beyond to know Revival 356 “is a safe place where people can show up and be seen where they are. You don’t have to clean up or scrub up. You can come exactly how you feel and as you are.”