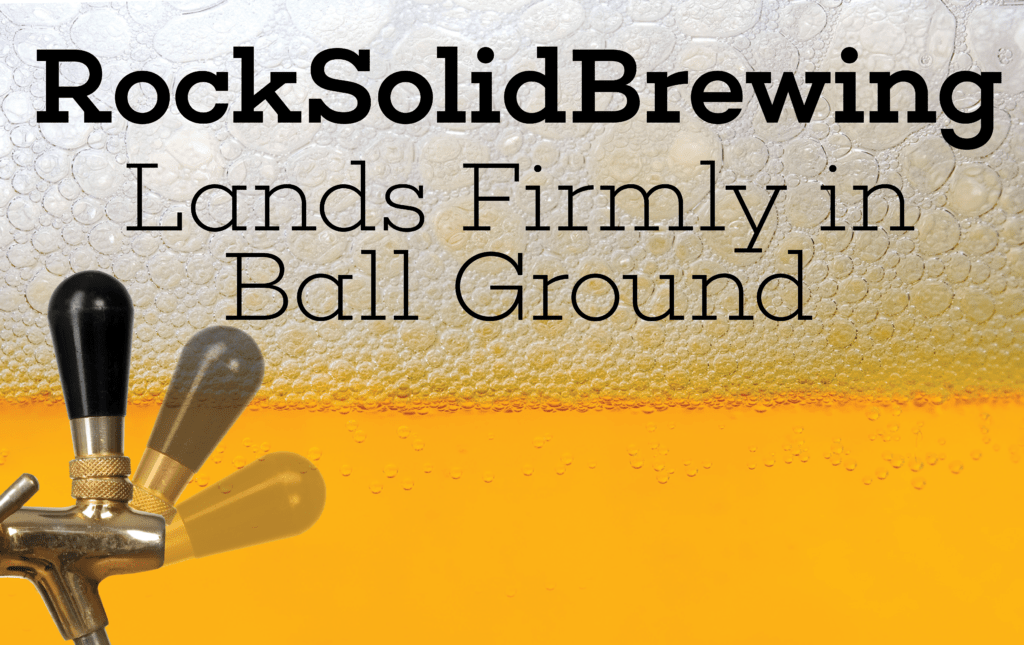 Four couples, one dream, and a hobby have combined to turn into a business. Despite the pandemic, RockSolid Brewing finds success with good beer, a family-friendly atmosphere, and a welcoming community.

It’s Thursday night, and owner Jim Gillum is looking at the customers filling the tap room at RockSolid Brewing in downtown Ball Ground. Despite it being a weeknight, every table is full, with couples, friends, and families enjoying themselves.“Right now we have only half our tables out,” says Jim, one of the eight people who own the craft brewery. “It’ll be interesting to see what happens when we can open at full capacity.”The pandemic added a whole layer of challenges to the many trials anyone faces when opening a new business. Nevertheless, the community’s response to RockSolid bodes well for success.

“We couldn’t have picked a better place than Ball Ground,” Jim says between talking to customers whose names he already knows and who know his. “The day we opened, December 12, 2020, we had a line stretching from the bar right out the door for a good six hours. No one seemed to mind waiting.”Ball Ground, one of northern Cherokee County’s most sought-after communities, was already home to a historic downtown with several notable shops and well-known local food establishments. Frankfurt Döner & Meats deli market, Les Bon Temps Louisiana Kitchen, and the Ball Ground Burger Bus are among others.For all its charms, though, what seemed to be missing from downtown Ball Ground was a neighborhood pub. RockSolid has turned out to be the right business in the right place and at the right time. [wonderplugin_carousel id=”2″]“It has been a wonderful experience, nothing we ever expected,” says Antonia Alberga-Parisi, another of the owners. “Cherokee County is enthusiastic about new business, and the people of Ball Ground have been welcoming. We did a lot of research and wanted to make sure we opened this business in the right spot. We couldn’t have picked a better place.”A sense of place is also behind the name RockSolid. Antonia explains, “One of Ball Ground’s most well-known residents was Oscar Robertson, whom everyone called the Rock Man. He passed away in 2005, but he had a big rock shop downtown and also owned several other buildings. We wanted to honor that part of the city’s history.”The story of the company itself is no less interesting, especially because beer making had been only a hobby for a couple of the owners, and none of them had ever owned a business. “Jim Gillum used to brew beer in his garage and invited my brother, Nick Alberga, to join him,” Antonia recounts. “When my husband, Carmine Parisi, and I moved down here from New York in 2013, Nick invited my husband to join them. Jim’s wife, Kate, worked with a woman named Chris Nelson, and she and her husband, Doug, were interested in investing. Add in Nick’s wife and Jim’s wife and me, and eight of us went in together to start this business.”

While opening a business can be a challenge in the best of times, RockSolid faced some once-in-a-century challenges. “The biggest surprise was COVID. The global pandemic threw a wrench in our plans,” Antonia says with understatement. “Not only were people not going out, but also most banks became wary of financing any business that thought opening during a pandemic represented a good business plan. We’d probably been working on the idea for about three years and were finally ready to move forward.”In fact, the owners had gotten a building in Ball Ground in November 2019 and had planned to open in spring 2020. Antonia says, “Obviously that didn’t work out. Then we were going to try Black Friday, but we weren’t quite ready. We finally picked December twelfth—12/12—and it proved to be just right.”Six months later and with RockSolid filled with people every night, it can be easy to think the pub’s popularity is a function of people’s desire to go out and socialize again, something that likely hasn’t hurt the business. One of the most important things to know about RockSolid, though, is that it has really good beer.

“The beer I used to make as a hobby was pretty good,” says Jim, “but when we started this venture, we hired a professional brewmaster, Brian Crass. He can take a vision for a specific type of beer, a flavor profile, and make it a reality. He is very talented and a big reason we are able to serve such high-quality beers.”Even though RockSolid has only ten craft brews on tap right now—a number bound to increase—it has something for every taste. The Big Hoppa double IPA appeals to those who like their hops strong and flavorful. The St. Cecilia Vanilla Coffee Stout offers a rich flavor profile in a robust stout. The 4th Planet is the brewery’s red ale. Linger Longer Lager is a Helles German-style brew, and the 12/12 Pale Ale commemorates opening day with a crisp taste and smooth finish.“Our beers are definitely something special,” adds Jim, “but look around. You see families here talking to each other, playing board games or cards, and enjoying themselves. RockSolid has turned out to be everything we hoped it would be. Ball Ground feels like home now, and we plan to be here for a long, long time.”