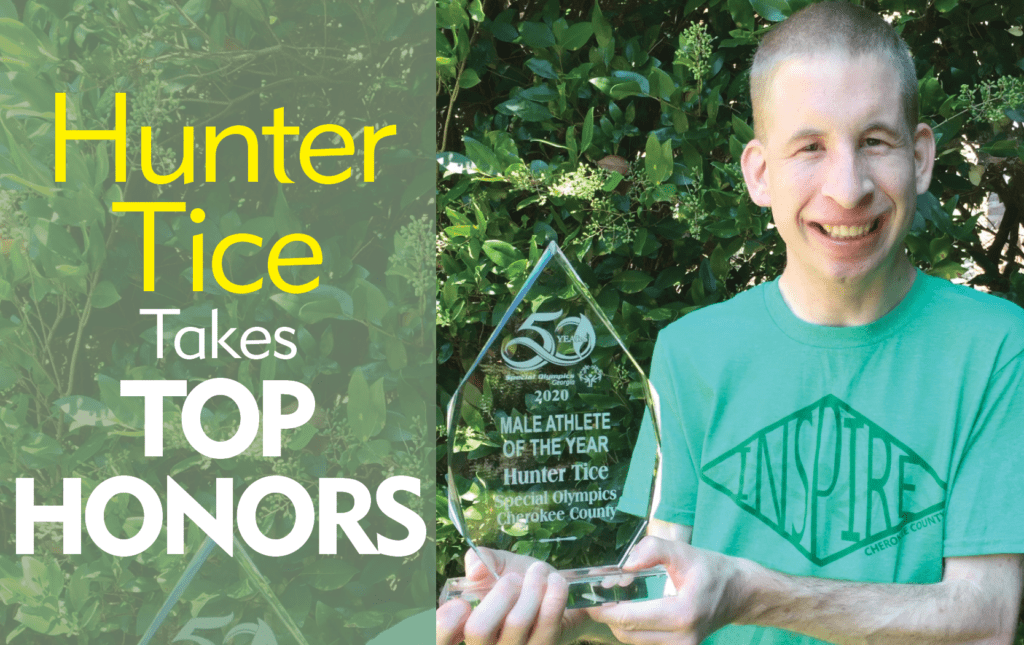 Ask Hunter Tice what sports he likes to play, and he immediately replies, “Baseball, basketball, and volleyball.” He’s a natural athlete with a room full of medals, and baseball is his favorite.

Hunter, a standout player nicknamed Big Dog by his coaches, is also known for cheering his teammates on, for always taking to the field with a positive attitude, and for his sportsmanlike conduct, win or lose.His accomplishments earned Hunter the Georgia Special Olympics Athlete of the Year Award for 2020, an honor given annually to one male and one female athlete. Hunter was chosen for the top honor in the state out of more than 26,000 athletes with intellectual disabilities who participate in more than 180 programs in 121 counties.Dave Martinez, who along with wife Amy Aenchbacher are the volunteer coordinators for Cherokee County Special Olympics, says, “This award recognizes the accomplishments, both on and off the playing field, of an athlete who embodies the spirit of Special Olympics through hard work, determination, and a positive attitude. We are absolutely overjoyed for Hunter to have been selected for this honor.” Dave and Amy are also adapted PE educators with the Cherokee County School District. As Hunter’s instructor, Dave helped him get involved in Special Olympics as an elementary student.

Hunter has a rare genetic disorder known as unbalanced chromosome translocation. While cognitively delayed, he is physically able to do anything he wants to do. At thirty Hunter lives in the BridgeMill community of Canton along with parents Joe and Amy (yes, she’s also named Amy) and younger brother Bryan, twenty-four, who has cerebral palsy and uses a wheelchair.“Hunter basically loves life and gets the most out of every minute,” his mother says of her oldest son. “The one question many people ask about Hunter is does he ever have a bad day? Is he always so happy? He has always had high self-esteem and has confidence to try—always giving it his best shot. He loves to compete and win. “What he lacks in skills, he makes up for in enthusiasm. As another Special Olympics athlete puts it, ‘Hunter is our best cheerleader.’” Dave Martinez agrees that Hunter is known for his cheerful outlook on life. “I once had a conversation with Joe about Hunter’s extraordinary optimism. Joe stated that Hunter eagerly wakes up every morning anticipating what adventure is in store for him that day. As a former adapted physical education teacher and long-time Special Olympics coach of Hunter’s, I can attest that this young man truly is the epitome of positivity. If you ever have the honor of meeting Hunter, you will agree. His optimism is contagious. In fact if you spend a prolonged period of time with Hunter, your face muscles will become sore from the constant smiling.” [wonderplugin_carousel id=”2″]Amy describes her son as a strong athlete who always has a smile on his face. “His happiness is contagious to everyone around him. Hunter has earned many medals in softball, basketball, golf, volleyball, and soccer. Hunter is a true athlete with great sportsmanship. Win or lose he is happy knowing he tried his best. Not only does Hunter love to compete in sports, but he also especially enjoys the opening ceremonies at the state games. He is usually the first athlete celebrating by singing and dancing.”When asked what he enjoys about Special Olympics, Hunter says, “I enjoy baseball and dancing.” He adds that at baseball games, “I would tell the other players to go to the infield or outfield. I am a catcher and batter.”Mom Amy said that when the Cherokee County Special Olympics team arrives at weekend events, the opening ceremonies come first, with all the teams taking to the field to be introduced. That event is followed quickly by a dance mixer that everyone, and especially Hunter, enjoys.Cherokee County Special Olympics provides year-round sports training and athletic competition for children and adults with intellectual disabilities, Dave explains of the program. “Our goal is to help bring persons with intellectual disabilities into the larger society under conditions where they are accepted, respected, and given the chance to become useful and productive citizens. When we achieve this goal through our sports program, we demonstrate that Special Olympics has a unique value: to show the world that every person counts and that every person can be something good when we work together.”

The coach recalls a couple of years ago at the Georgia Special Olympics State Games when Hunter’s volleyball team made it to the gold medal round. “Unfortunately his team did not win the match, but the first thing Hunter exclaimed following the game was, ‘Does this mean we won the silver medal? Awesome!’”Hunter and his family moved to Cherokee County in 1993. They first settled into the Towne Lake area of Woodstock. They then moved to Canton in 2001. Hunter started school in the pre-K program at Sixes Elementary. He also attended Chapman, Canton, and Carmel elementary schools. He then went to Woodstock middle and high schools.Joe says of his son in the early years, “Hunter started playing basketball soon after he was able to walk and has been playing on various teams ever since. He had a lot of fun on the Upward basketball and football teams at church. He also had a passion for golf early on and still loves to play. He participated in Challenger baseball—a special-needs baseball team with buddies.”[wonderplugin_carousel id=”2″]Amy says that she and her husband always asked Hunter about getting involved in various sports. “Whenever we heard about an activity we thought he would like, both special needs and mainstream sports willing to include him, we asked him if he wanted to try it, and his answer was almost always an excited, ‘Yes!’”The family also enjoys sports together. Amy enjoyed various sports while she was growing up, such as swimming, track, tennis, and volleyball, and Joe played basketball. To this day Joe runs regularly, sometimes pushing Bryan in his wheelchair. Joe also participates in some races with Bryan. Hunter’s favorite thing to do now, he notes, is to golf with his dad. “Golf is my favorite sport, and Tiger Woods is my favorite golfer,” Hunter says. Hunter’s room prominently displays a photo of Hunter at a golf match, and Tiger is photobombing the picture.Before COVID, Hunter worked at the Towne Lake Chick-fil-A. Hunter attends the Empower Cherokee Day Program for now and hopes one day soon to get back to his old job.Scott Hall, owner-operator of the Towne Lake Chick-fil-A restaurant, says it is a pleasure to have Hunter on the job at his location. “Hunter is a great kid. He always did a great job and has great manners. How fortunate we were to come across someone like that! He worked for a number of years, and the plan is for him to return when we reopen the dining room.”

Scott hired Hunter after a friend of Amy’s approached him. Scott explains, “She asked if we could use him with small jobs around the restaurant, which would give him an opportunity and experience in the workplace. I have always been a proponent of giving those with special needs an opportunity. I know how important it is. I said definitely, and we got him started. I wanted to help him be productive and showcase what he could do and help him grow.”Hunter worked in the dining room stocking the condiment bars, cleaning tables, and helping with other chores. Customers familiar with people with special needs are supportive of them in the workplace, Scott notes. “A lot of customers appreciated seeing him and talking with him.” At the restaurant Hunter often saw former teachers and fellow students, Amy says. Reconnecting with familiar faces was a positive aspect of his work at the restaurant.Hunter looks forward to getting back to family vacations, such as trips to Disney World with his family, a definite favorite. Hunter says he likes the rides, especially the Rock and Roll Rollercoaster, that “goes really fast.” The trip is a favorite of Bryan’s as well. Of course Hunter loves golf games with his dad, especially on the BridgeMill par three course. When pressed about who wins, Hunter says he does. Joe explains that regardless of who is winning on the first seventeen holes, when they get to the eighteenth hole, they let that hole decide the game.Whatever game Hunter is playing, winning or losing, being with his family and his friends puts the biggest smile on his face. Being named the Georgia Special Olympics Athlete of the Year gives him yet another reason to smile.