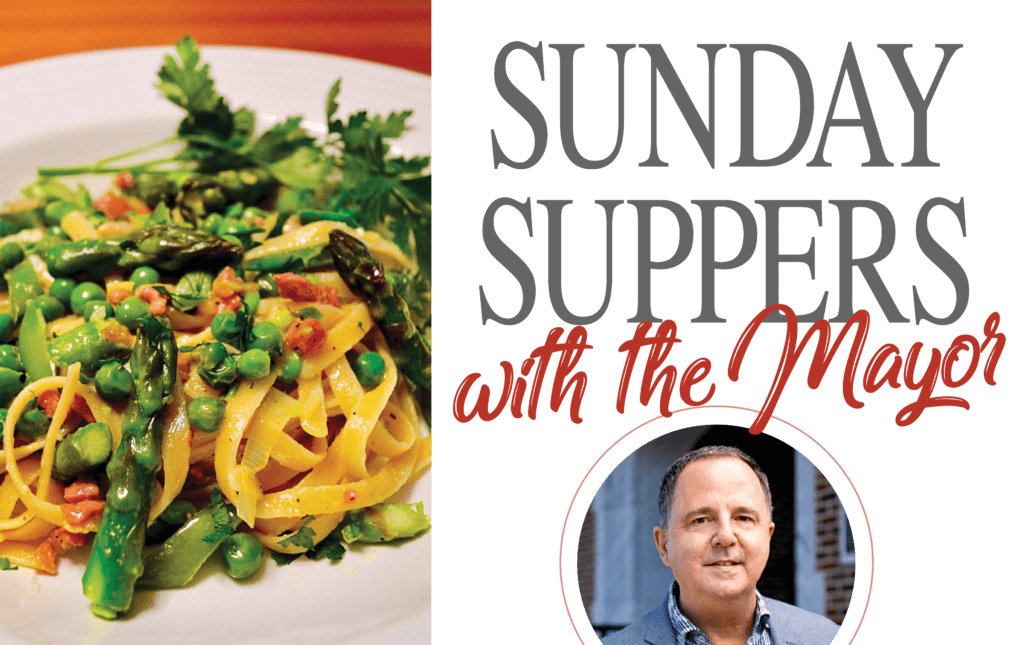 Sunday Suppers with the Mayor

Canton Mayor Bill Grant knows there’s plenty cooking in Canton, with hot new dining spots opening all the time. Bill himself, though, prepares some of the city’s best meals, as he carries on the proud Southern tradition of the Sunday supper.When Canton Mayor Bill Grant wanted to celebrate a good friend’s birthday in 2019, he suggested they get together for dinner. Two years later, memories of the evening’s exquisite menu still linger: an entrée of pork tenderloin with cheddar mashed potatoes, prosciutto, and fried sage leaves; a side of fried organic cabbage with bacon; and gluten-free blood orange tart for dessert.Our area has become a foodie paradise. New restaurants are opening across Cherokee County that offer creative and locally sourced fare for every palate. It would be natural to ask where the mayor and his friend went to find such delectable dining, whether it is still open, and if you need a reservation.The kitchen where such delights were prepared, and the dining room where they were enjoyed, are only a couple blocks from downtown Canton: Bill’s house. And the chef? None other than Canton Mayor Bill Grant himself.

“I’ve always loved to cook,” says Bill. “It’s a hobby and also an escape. I love challenging myself to try new recipes or put a new twist on a traditional dish.”He adds, “Sometimes it feels good just to chop stuff up.”If Bill occasionally needs to blow off some steam, it’s likely because his metaphorical plate is full. Elected mayor of Canton in 2020, he is also founder and principal of Grant Design Collaborative, a branding and creative services firm he founded in 1995. The two jobs keep him quite busy.“I’ve always been a foodie, and I love to entertain. I used to spend the whole day in the kitchen preparing dinner on Sunday,” Bill says. “I still love to cook, but I don’t have as much time to cook as I used to.”[wonderplugin_carousel id=”2″]Many of Bill’s most enticing gastronomic creations are chronicled in a blog he began in 2007 titled Bill’s Sunday Suppers. The site showcases years of what he prepared for the biggest meal of the week, including the 2019 birthday dinner for his friend. The blog also has photos, preparation tips, cooking stories, and the recipe for one of the dishes served at each meal.“I haven’t updated the blog in a couple of years, but it shows how much I love to cook,” Bill says. “There are a lot of great recipes on the blog, and I hope it will inspire someone to try something they’ve never cooked before.”Bill’s interest in cooking was piqued early in life, when he was born and raised in Dalton. His father was a chef in the Army, while his mother cooked Southern food with aplomb.“My father cooked dinner for the family about once a month, and it was usually something that seemed exotic,” Bill recounts. “Of course I would never eat it when I was a kid, but I always thought what he made was interesting, as well as how he made it look on the plate.”

Because of his father’s cooking, Bill says, “I was never intimidated by trying to cook something unusual.” The story of his professional career and how he ended up in Canton suggests that Bill, despite his friendliness, isn’t intimidated by much.After graduating from Berry College in the mid-1980s, Bill went to work for Shaw Industries, and within six months was named marketing manager for the flooring giant’s commercial division. After a mere five years and before he turned thirty, he started his own design firm. After growing a client base in Dalton, he set his sights on Atlanta, moved to Midtown, and picked up new clients there as well. “Most of the time I seemed to be driving between Atlanta and Dalton,” he recalls. On each trip he passed the exit for I-575 and saw the sign for Canton. He says that one day, “I took the exit and drove into downtown Canton to see what it was all about. There was not much downtown then, but for some reason I felt like I belonged here, that this was a good place.”On that first visit, Bill happened to meet a man scraping paint around the windows of a building downtown and asked if the man knew the owner. After learning the painter was also the building owner, Bill asked if he could rent the third floor and move his business there. “So the week between Christmas and New Year’s 1996, I moved to Canton and moved my business into the building,” Bill says. [wonderplugin_carousel id=”2″]Six months later, Bill bought the historic three-story brick building formerly known as the Galt Building on the corner of E. Main Street and E. Marietta Street. He has run Grant Design Collaborative on the second and third floors ever since, renting the street-level spaces to a variety of commercial establishments over the years.Bill also bought an old house a few blocks away. His favorite room? The kitchen, of course. “When I bought the house it had a very small kitchen, as many older houses did,” says Bill. “In 2004 I gutted and renovated the whole house, and I put in my dream kitchen. That’s part of what has made cooking there such a pleasure.”Always civic-minded, not long after Bill arrived in Canton, he sent a three-page email to then Mayor Gene Hobgood about what he saw as the potential for a thriving downtown. Hobgood responded by asking Bill to head a committee of downtown merchants and other stakeholders to create a plan. He’s been involved with community development ever since.

“I admire Bill’s commitment to the community,” says Jeff Brown, Bill’s partner of ten years and husband since 2017. “He’ll even answer emails, calls, and texts while we’re on vacation, because he is committed to Canton. I think we’ve hit the jackpot to be able to live in a town like this, with great food, art, and heritage, and Bill never stops trying to make it even better.”Taking his commitment even further, Bill was elected to the Canton City Council in 2014 and again in 2018, but he stepped down halfway through his second term to run for mayor, an office he won handily with more than 75 percent of the vote.“I see design and cooking and being mayor as using many of the same skills,” Bill explains. “Whether you are talking about a community development project, a brand strategy, or a great meal, you know what you want the end product to be, so you need the right recipe, the best ingredients, and the right process. When you’re done, with any luck you’ve created something great, something people will like.”“To me Canton has always been welcoming,” he continues. “I lived in Atlanta for a while, did the high-rise thing, and got that out of my system, but I am a small-town guy at heart, and Canton is my town.”