The Sound of Appalachia 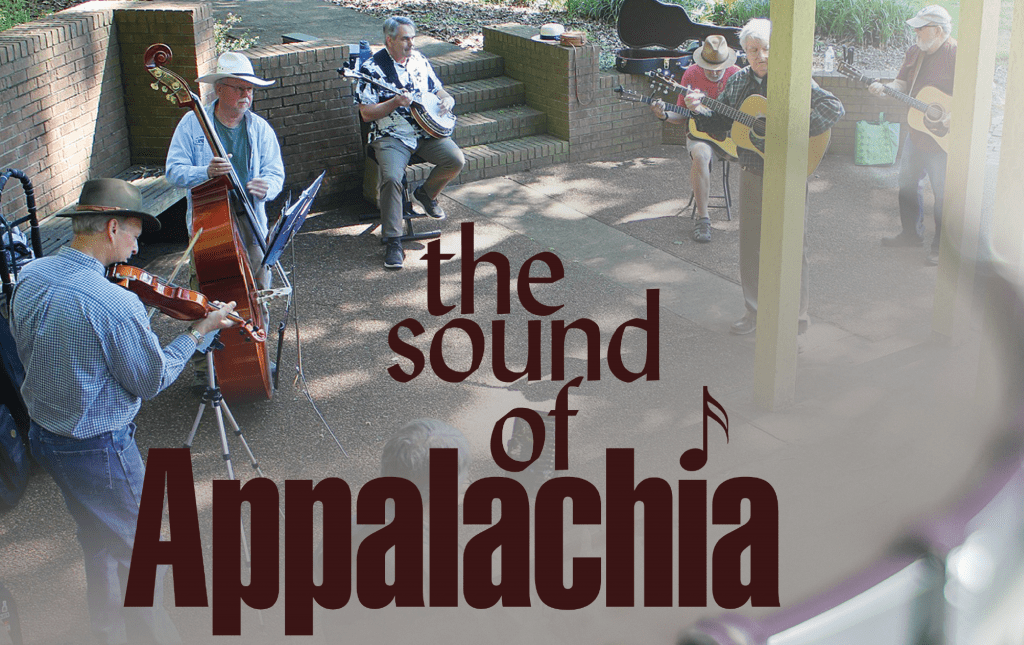 The Sound of Appalachia

Although its upbeat reverberations may be recognized as distinctly American, bluegrass is actually an amalgamation of musical traditions, song styles, and instruments brought to the Americas from Europe and Africa. The joyful interplay of acoustic string instruments—banjo, mandolin, guitar, fiddle, and bass—evolved over generations in the Eastern U.S. region of Appalachia, and the music continues to be celebrated at bluegrass festivals all over the U.S. and right here in Cherokee County.

As much as Appalachia is recognized as the birthplace of bluegrass music, it also continues to be stigmatized by negative myths and stereotypes of hillbillies, moonshine, and feuding family clans. That’s one reason many people are surprised to learn that Cherokee County, a generally affluent county with a diverse and growing population, is part of Appalachia.

“Not only do you have a lot of people moving into Cherokee County who don’t know that history, but people who grew up here also don’t identify themselves as Appalachian,” says Dr. Mark Roberts, president of Reinhardt University in Waleska and an expert on Appalachian history and culture. “People don’t want to be stigmatized and associated with the Appalachian stereotypes, even though most of the stereotypes are not accurate.”

Mark offers one other fact most people don’t know: “Bluegrass music, as it was popularized, was a commercial venture, but because it is an older music form from a region that already has its own mythos, we tend to romanticize it.”

It is true that bluegrass has long and deep roots—roots that extend across the Atlantic and back to the pub songs, traditional dance songs, and ballads of Scotland, Ireland, and England. As immigrants from these regions settled in the U.S., often in the Appalachian region, these old songs embraced local traditions and were passed down through generations of family members, comingled with old-time music. It became the music that community members played for events such as weddings, dinners, and dances.

“In the early 1920s a man named Ralph Peer, who was a talent scout and record producer, traveled the Appalachian region and began recording many types of music,” says Mark. Ralph Peer pioneered field recording with a series of sessions in Atlanta in 1923. “In 1927 Peer organized another series of recording sessions in Bristol, Virginia, which have become known as the Bristol Sessions or as the Big Bang of Country Music. It was one of the first times the Carter Family was ever recorded.”

Mark continues, “It was during these times that the Carter family patriarch, A. P. Carter, took many of these traditional songs—some of which were really quite long—and worked to shorten them to about three minutes so they could be played on the radio. In my onion, A. P. Carter created country music.”

What Mark makes clear is that Peer’s recordings were done to make records that could be played on the radio and earn money. “He believed there was a market for this type of music, and he was right.”

Dr. Wayne Glowka, a professor of English and dean of the School of Arts and Humanities at Reinhardt University until his retirement in 2020, knows a great deal about music, and like Mark Roberts, he is a musician himself. He can tell you about the instruments used in bluegrass music. “You’ve got to have a banjo for bluegrass,” he says. “You can go without a fiddle or a mandolin, but you have to have a guitar and a banjo, and if you can afford it, a bass.”

Wayne continues, “Banjos started out as a gourd instrument brought over from Africa. In the 1800s banjos started being used in minstrel shows and in jazz in the 1920s. But those are four-string banjos. In bluegrass it’s always a five-string banjo and either the clawhammer strum or the Scruggs-style of finger picking.”

Banjo is one of the instruments Wayne plays, along with guitar, mandolin, fiddle, upright bass, and keyboard. He can also tell you the difference between a violin and a fiddle, even though they are the same instrument. “If you’re a classically trained violinist, you’re taught to add vibrato to almost everything you do,” he explains, “but when you play fiddle, you ‘saw’ on it with the bow. If it starts to sound too sweet, you’re doing something wrong.”

One thing Wayne does right is plan what he calls a hootenanny—an informal gathering of musicians who play together for fun, dances, or entertainment. He planned his first hootenanny while he was in graduate school in Delaware and has continued to do so at each college that employed him. “When I got to Georgia College in Milledgeville, the Women’s Club used to plan one, but eventually that club went away as the times changed,” Wayne recalls. “I kept on and played for student orientation in the summer. When I became an acting co-chair of my department, the other co-chair and I decided to put together another hootenanny. We did three of those down there.”

When Wayne came to Reinhardt in 2007, he organized half a dozen more hootenannies but kept kicking around the idea of organizing a professional bluegrass festival, something Mark also supported when he became acting president of the university in 2020. Jessica Akers, who works in development and marketing at the university, helped plan the festival and secured performers.

“We were planning to do the first bluegrass festival in 2020, but it didn’t happen,” Mark recounts. “Since we couldn’t hold indoor events, we bought an outdoor stage and set it up in the middle of the campus, and in 2021 we had a three-day bluegrass festival. People really liked it, so we are going to do it again and make it a tradition.”

Tradition keeps bluegrass music alive and gaining new audiences all the time. Bluegrass is the sound of authenticity, the sounds of Appalachia. Even if we feel removed from that region, the music still touches us in a unique way. Acclaimed bluegrass musician Alison Krauss explains our connection best: “For most of its life bluegrass has had this stigma of being all straw hats and hay bales and not necessarily the most sophisticated form of music. Yet you can’t help responding to its honesty. It’s music that finds its way deep into your soul because it’s strings vibrating against wood and nothing else.”