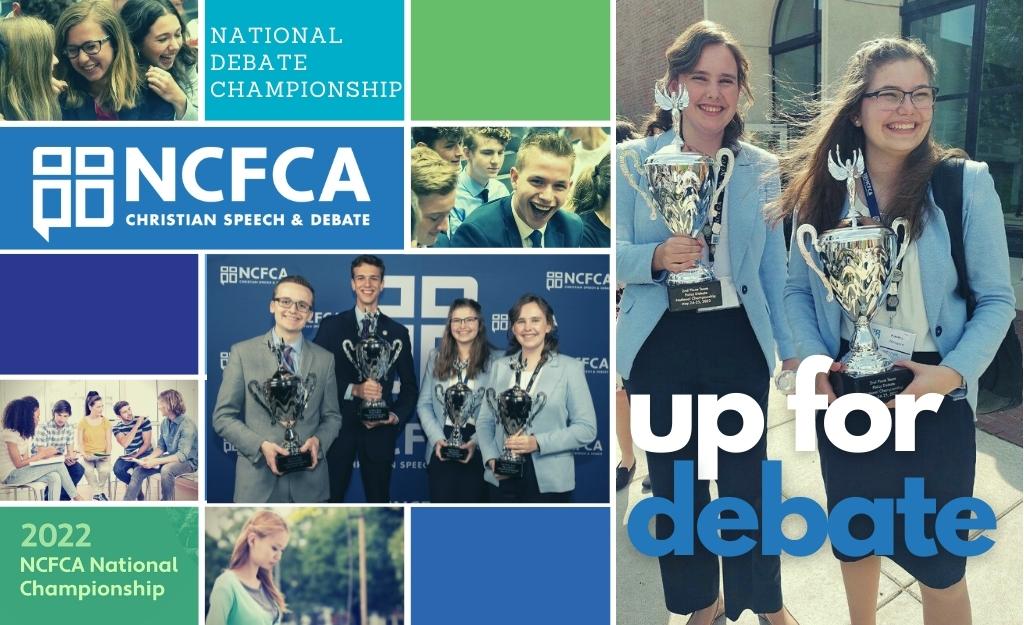 The average person who hears the word forensic will think of forensic sciences, thanks to the prevalence of television shows like CSI: Crime Scene Investigation, NCIS, and others, which show investigators solving ghastly crimes.

The Merriam-Webster Dictionary, however, first defines the word forensic as an argumentative exercise. Seventeen-year-old Cherokee County resident Kaeley Whitacre could have quickly solved the debate over the word, though, as she is involved in the National Christian Forensics and Communications Association [NCFCA], a faith-based speech and debate league with more than 38,000 participants nationwide.

This year Kaeley worked her way into a spot in the national championship held at Saint Paul, Minnesota’s Northwestern University, where she and partner Trinity Kipp of Florida earned an impressive second place in the team policy debate.

Kaeley is the oldest child of Michael and Kerri Whitacre, who both served in the United States Air Force. Life in the Air Force meant the family moved around the country quite often and lived in Arkansas, Washington, and Oklahoma before calling Georgia home. Kaeley and younger siblings Austin, Blake, and Kyra are homeschooled and have used lessons from Classical Conversations, a Christian homeschooling program, since Kaeley was three years old. Kaeley presents herself as a bright and well-rounded young woman whose favorite school subjects are logic, philosophy, and history, rather than lunch and gym, a more typical response from highschoolers.

Kaeley’s mom, Kerri, readily admits that initially she and her husband, Michael, had to push Kaeley to join the debate program because they knew that forensic debating would help Kaeley grow academically and shape her communication skills. Kaeley says many of her teammates were also strongly encouraged by their parents to participate in debate and in hindsight are thankful they were. She shares that despite her initial nervousness and a few rookie blunders—like forgetting to start her timer—she was hooked after her first tournament, although she faced challenges along the way.

Kaeley admits to sometimes getting “spicy,” as she calls it, with competitors because in the heat of debate it’s easy to lose oneself and feel that a competitor’s argument is a personal attack. “I have had emotional struggles when researching an argument for a full year and then [feeling] like someone just isn’t understanding my position,” but she says she has learned much from her experiences. “In competition,” she continues, “sometimes you are asked to defend both sides of an argument—that’s an intellectual exercise that stretches your mind.” 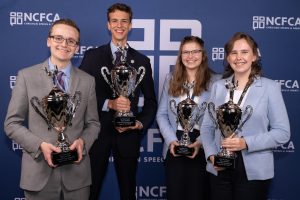 The first- and second-place winners in the NCFCA team policy debate finals all spoke eloquently and defended their positions, with Kaeley and Trinity arguing the affirmative and David and Ben arguing the negative.

The NCFCA’s goal is to empower students to apply and communicate their worldview with skill and clarity. Kaeley and her mother believe she has accomplished that much plus more. As a homeschooler Kaeley had a limited social circle, but now she lights up when talking about the young people she has met at NCFCA. “We see the same kids all the time at the tournaments, and we have formed deep and lasting friendships. We have grown and learned so much together. I can’t imagine my life without these people.”

The Future is Bright

Now in her senior year, Kaeley helps coach local speech and debate club Semper Paratus with a focus on Lincoln Douglas-style debating. Next year she plans to attend Liberty University in Lynchburg, Virginia, to pursue a degree in data analytics. When asked how her experience with forensic debating will help her in her career choice, she explains, “I will be gathering and analyzing all sorts of data for different companies. I have to present and communicate my findings persuasively and effectively, and that’s where all my years of honing my skills will be crucial.”

It can be easy to forget that not all competition occurs on fields and in athletic gear. Kaeley and her fellow competitors deserve attention, accolades, and support as excellent examples of a vital form of intellectual competition among our future policymakers and leaders.