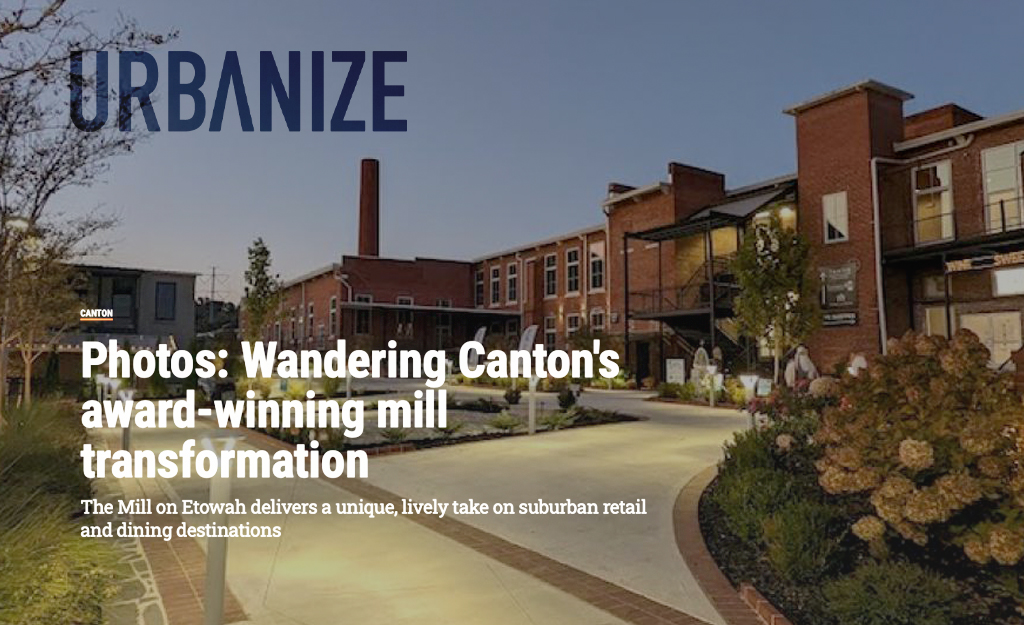 Positioned between the serpentine Etowah River and the revived, historic streets of downtown Canton, the redevelopment of a historic mill that once made Cherokee County famous for its denim production today provides an alternative to so many built-from-scratch, suburban shopping and dining nodes. It’s different enough to be called refreshing, like autumn mornings.

Situated about 38 miles north of Midtown, The Mill on Etowah shopping, dining, and office district broke ground in 2018 and continues to evolve, embracing its distinctive setting amidst a 120-year-old former cotton mill.

Founded in 1899, the brick-built mill on the river’s banks became a Canton icon and major denim producer until its owners, the Jones family, shut down operations in 1981. Nearly four decades later, Alpharetta-based developer Penn Hodge and business partner Grant Schmeelk, a former banker, bought the property for $3.6 million from the Jones family and began implementing their vision across its 35 acres.

The project made headlines in 2019 when Reformation Brewery uprooted its main warehouse and production facility from Woodstock to The Mill, opening alongside another marquee tenant, Cotton Mill Exchange, where some 200 artisans and makers showcase their wares in a sprawling store that charmingly creaks with age. That same year, the Georgia Economic Developers Association presented The Mill with its “Deal of the Year” award for strategic, creative use of the shuttered landmark property…


Josh Green is a published author, editor of Urbanize Atlanta, contributing writer for Atlanta Magazine, editor of Curbed Atlanta, and has written for the Atlanta Journal-Constitution.

View upcoming events at The Mill on Etowah on our Calendar or at EtowahMill.com.