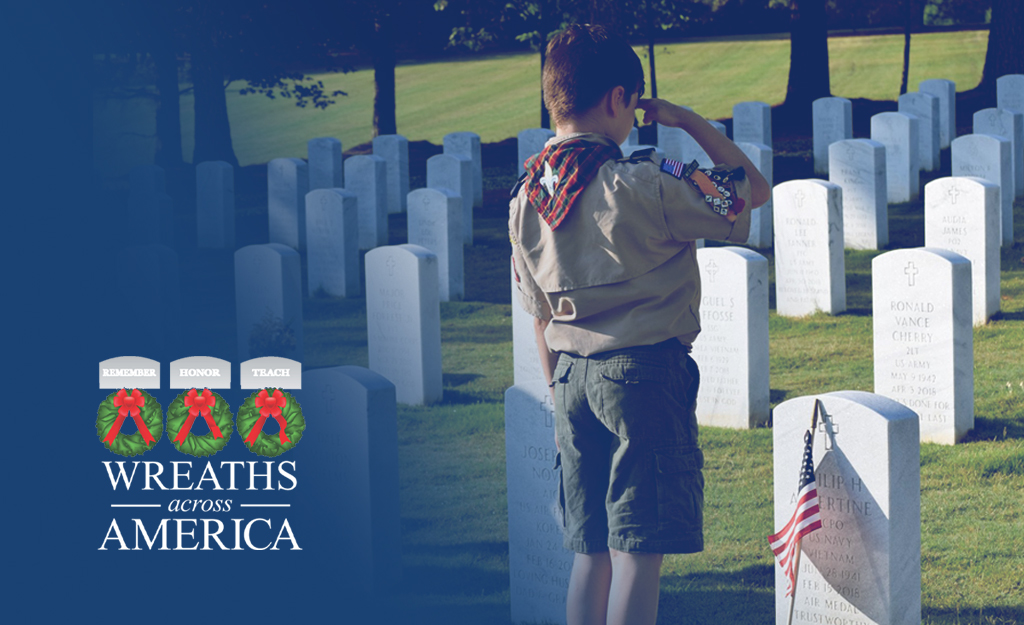 At the Georgia National Cemetery [GNC] in Canton, a group of dedicated volunteers assist family members of veterans to secure a final resting place for their lost loved ones. All these volunteers are veterans themselves and take great pride in serving their country again—this time by donning a uniform of blue blazer, white shirt, gray slacks, and a necktie with a U.S. flag motif. All wear a lapel pin shaped like a folded U.S. burial flag. Some travel round-trip more than a hundred miles just to volunteer their time to ensure a veteran is given proper honors at a committal shelter near one of several gardens of stone nestled in the foothills of the Blue Ridge Mountains. Of the 135 national cemeteries, none has a team of volunteers quite like the one at GNC.

Each volunteer is also a member of the Georgia National Cemetery Advisory Council [GNCAC], a group of veterans and concerned citizens who help raise funds to support the Wreathes Across America program and other patriotic ceremonies in the cemetery throughout the year, including Memorial Day. Just last June, after six years of dedicated fundraising resulting in more than $415,000, the GNCAC hosted a formal dedication for the forty-foot-tall Veterans Tribute Carillon Tower that plays music for all to hear across the hills of those sacred grounds. Installed in May 2020 on one of highest points in the cemetery, the tower serves as a beacon of appreciation for the heroic actions of America’s military service members past and present.

Every deceased veteran can receive honors, including a sharply folded burial flag. When service members are retired from service or die while on active duty, they are eligible to receive full honors during their funeral. When full honors are rendered, the precision of three rifle volleys are followed by the mournful sound from a lone bugler playing “Taps,” which gently floats across the beautifully landscaped gardens among the 775 rolling acres the cemetery spans.

The cemetery is indeed a meaningful and beautiful place made possible by a donation of land from Dallas Scott Hudgens, Jr., a Georgia native and Army veteran who survived D-Day at Normandy on June 6, 1944. He didn’t see home again until after the war in Europe ended in April 1945, by which time he had fought at the Siegfried line, Hurton Forest, and the Battle of the Bulge. After returning to the Atlanta area, Scott became a very successful businessman and philanthropist, always giving back to his community and state. His likeness is mounted on a bronze plaque on Georgia marble just a few feet from a large American flag near the center of the cemetery. In his honor the road leading to the cemetery, once called Mount Carmel Church Lane, was renamed Scott Hudgens Drive.

Every day at Georgia National Cemetery is like Memorial Day, and I am extremely humbled and proud to be one of the volunteers serving once again.

An amateur photographer and U.S. Navy veteran, James Walters received the 1991 George Washington Honor Medal for Community Service from the Freedoms Foundation in Valley Forge, Pennsylvania. James is a 1972 graduate of Gupton-Jones College and a former funeral director at A .S. Turner and Sons Funeral Home and Crematory in Decatur, Georgia. In 2022 he received the Service to Veterans Medal from the Georgia Society of the Sons of the American Revolution for his committed volunteerism supporting Georgia National Cemetery.

To make a donation or volunteer to assist with the placement of wreaths each December, contact the nonprofit Georgia National Cemetery Advisory Council at GAnationalcemetery.org.

Love of Freedom & the Path to Citizenship

Paying Homage to the Price of Freedom