Why We Walk: Walk to End Alzheimer’s 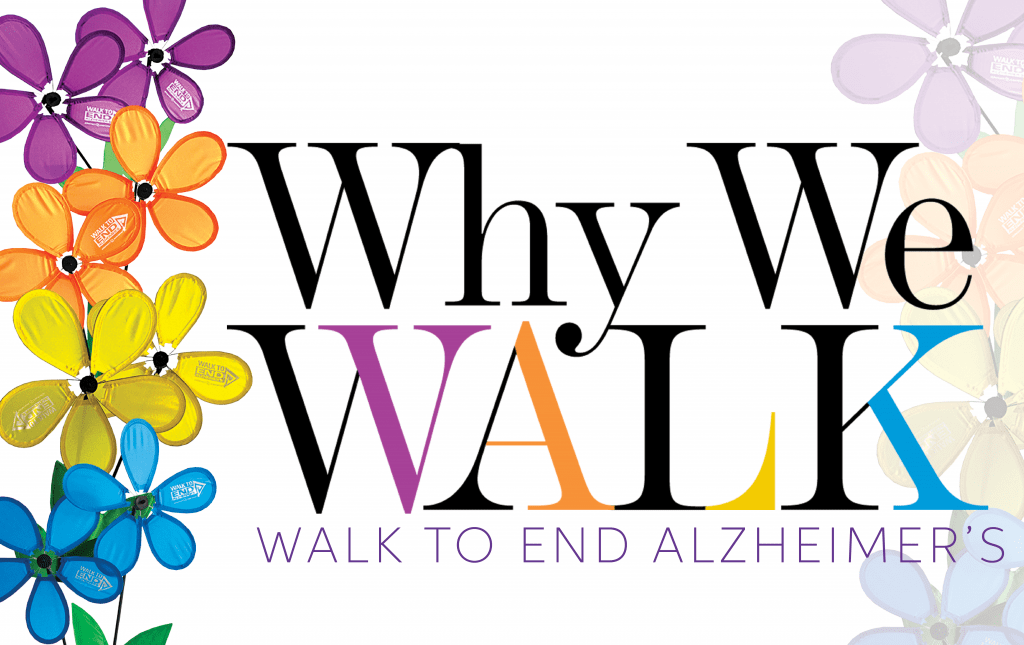 Memories shape who we are. We cherish memories of friends, family, and successes. Unfortunately millions of Americans have memories that are slowly fading. Organizations such as the Alzheimer’s Association are still dreaming of and working toward a world where memories last a lifetime.

Almost everyone is touched by the disease in one way or another. Alzheimer’s is a progressive brain disease that worsens over time. Symptoms occur as brain changes affect cognition and eventually basic bodily functions. The course of the disease usually lasts between four to eight years after diagnosis, though some patients have lived up to twenty years with Alzheimer’s dementia.

The Alzheimer’s Association is a national nonprofit organization founded in 1980. The original goal was to unite caregivers and advance research into the disease. Since 1980 research and knowledge of dementia has grown by leaps and bounds.

In 2021 the Cherokee event is on track to meet and surpass last year’s goals, thanks to increased participation. Dan Phillips works for the Alzheimer’s Association and is the organizer of the Walk to End Alzheimer’s in Cherokee, Rome, and Dalton. Dan shared, “It has been inspiring to see this committee be flexible and stay focused during the last year. Its hard work will show when we start the opening ceremony.”

The blue flower carries a great deal of meaning, as the blue flower is held by those who have Alzheimer’s or dementia. At the end of the opening ceremony, one final flower will be raised in the crowd. This single white flower represents the future and hope for a cure.

The flowers are raised high throughout the walk as a collective commitment to fight to end Alzheimer’s. The Alzheimer’s Association states that the flowers represent the promise to remember, honor, care, and fight for those living with Alzheimer’s disease as well as their caregivers.

Chris Phillips, local Hickory Flat resident, participates in the Walk to End Alzheimer’s in support of her mother, Marilyn Kenny. Chris serves as a caregiver for her mother, who lives in a memory care facility in New Jersey.

Chris remembers her mother’s tenacity in her younger years. “My mother was an exceptional woman. In midlife, she was very healthy, very food conscious, and started running. Despite having never been a runner before, she completed sixteen marathons after the age of forty. When she was around the age of seventy-six, my brother and I started noticing some situations with Mama where she was beginning to forget.”

Things were minor at first, but when Marilyn got lost driving home from church and had to have someone help her get home, her children knew they had to take action.

Chris remembers the phone call she received from her mother after a day of tests at the doctor’s office. “That night she called me and said, ‘Chrissy, I want you to know that I have Alzheimer’s, but it’s okay, because I’ve already signed up to be part of a program.’ She became part of a pilot study immediately. As confused as she was, she was alert enough to know that she could make a difference. She went through a year of IV treatments, not knowing if she was getting a helpful drug or placebo, but her thought was, ‘Even though this won’t help me, maybe it will help y’all.’”

Chris’s involvement with the Walk to End Alzheimer’s coincided with the beginning of her mother’s decline. She explains, “I initially got involved with fundraisers because my husband, Dan, works for the Alzheimer’s Association. Coincidentally, around that time is when my mother started showing signs.”

Chris is thankful for her involvement with the organization because of the awareness and knowledge she acquired. “I don’t know that I would’ve acted as quickly had I not been aware of the Alzheimer’s Association, and I don’t think I would’ve taken it as seriously had I not known the information that I did.” Looking back, Chris admires her mother’s strength and selflessness throughout her diagnosis.

Tim Morris, director of Cherokee County Senior Services, has a supportive role in his relation to Alzheimer’s disease. Tim has worked with the aging population for thirty-two years in nursing homes, rehab facilities, and as operations coordinator of all senior centers in Gwinnett County for twenty-three years. Tim shares, “I wasn’t around a lot of family that battled with Alzheimer’s disease, but I’ve dealt with it a lot as part of my job.”

Tim began his work with seniors in 1990 when starting a new career path. The importance of senior centers to a community cannot be overstated, Tim says. “The senior center is not a daycare or a nursing home. We provide socialization and recreation for seniors. We also provide caregivers with any support they need. We help them find resources and support for their family.”

Tim walked in the 2020 Cherokee County Walk to End Alzheimer’s, where he carried the orange flower. Tim says, “I love that we have an orange flower, because I can relate to it one hundred percent. I deal with Alzheimer’s every day, just not in the way many think, but I see the struggles for families living with it.” Tim also shares that he admires the walk and the awareness it brings to a community about Alzheimer’s. “I don’t think people think much about it until you’re directly affected by it.”

Lisa Ciotoli, vice chair for retention of the Cherokee County Walk to End Alzheimer’s and owner of ACASA Senior Care, is both personally and professionally familiar with the sadness that accompanies Alzheimer’s disease. Lisa unfortunately lost her mother to the disease in November 2020 after a twenty-two-year battle.

Lisa reminisces about her mother’s respectable career as a nurse. Her mother attended Reinhardt in the 1930s, worked in the emergency room at Grady Memorial Hospital, and was a surgical nurse in Baxley, Georgia, where she grew up. In 1998, years later, Lisa’s mother was diagnosed with Alzheimer’s disease at the age of seventy; however, it would be just the beginning of her fight.

Lisa’s mother spent time in various assisted living homes, where Lisa saw a gap between training and care for many seniors in memory care. This personal experience sparked Lisa to start her own business, ACASA Senior Care, in hopes of closing this gap and providing more sufficient training for caregivers. “Each individual is unique in the way Alzheimer’s comes out in them, and caregivers need to be trained in how to handle these situations in the best way,” Lisa explains.

Many people say one of the most hurtful parts of loved ones’ decline with Alzheimer’s disease is when they no longer recognize you. Lisa offers, “Don’t be discouraged by thinking they don’t know you. They can’t always put a name or relation with your face, but they do recognize you as someone they love.”

Lisa was introduced to the Walk to End Alzheimer’s in the 1990s. At that time there were pop-up fundraisers and walks, and she participated whenever she could. After experiencing her mother’s gradual decline, Lisa knew she wanted to become more involved when an opportunity arose in Cherokee. “I like to volunteer and am involved with seniors as part of my job, so I was already part of this network. I enjoy the local walks and their intimate setting,” Lisa shares.

Meeting other people who have lost loved ones is one of Lisa’s favorite aspects of participating in the Walk to End Alzheimer’s. She says, “Sharing is really important to the grieving process, so I enjoy talking with others who have gone through the same things. It’s important for all of us to have that outlet.”

Sandi Bonner, former real estate agent and current resident of Holbrook Assisted Living in Woodstock, was diagnosed with Alzheimer’s disease more than ten years ago. Sandi is a young eighty-one-year-old and a social butterfly among the residents at Holbrook.

Sandi reports that at the beginning of her journey with Alzheimer’s, her mood changed and she felt depressed, despite being the outgoing jovial person that she is. “I didn’t think I had dementia. I thought I had depression. My doctor knew this [mood] was unusual for me, and I’ve since learned that my depression was the first stages of my Alzheimer’s.”

About six months ago, Sandi’s friends started inquiring about her memory, helping her realize that others were noticing too. She has difficulty recalling words and sometimes loses her train of thought, but she tries to stay active physically and mentally.

When asked if some days are worse than others, Sandi shares that her dementia has more to do with her mood. “I get a weak feeling, kind of like I just want to go back to bed. My memory is also affected worse when I’m in an uncomfortable situation or am nervous. If I’m calm, I tend to have an easier time.”

Sandi shares the story of her diagnosis with many, as she believes awareness is greatly important. “You hardly heard about Alzheimer’s many years ago, when I was diagnosed, so when I was invited to be part of the Walk to End Alzheimer’s here, I was excited to do that.”

Sandi refuses to let Alzheimer’s slow her down and takes every opportunity to go dancing. Sandi says, “I moved here to be close to my friend, who will pick me up and we go honky-tonking.”

Meeting others and chatting with them has always been Sandi’s go-to, and it hasn’t changed one bit. She also plays cards every day, an activity she loves. If she doesn’t have a partner nearby to play with, Sandi has no issue with playing against herself—and winning.

Next time you’re in Woodstock, stop by Holbrook Assisted Living and see Sandi for a card game or some dancing. 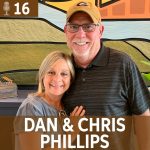