Will Cooper: The Man Behind the Mic

Friday night football is a hallmark of hometowns across the South with cheering crowds, stadium lights, and often the sound of “Touchdown!” being called from the broadcaster’s booth. Cherokee County’s fall Friday nights are no different. Amid the crowd’s cheers and the clashing of helmets, you’re likely to hear WLJA’s broadcast team led by Will Cooper, a local young man with a heart for the game.

Local radio station WLJA 101.1 FM is North Georgia’s home for Southern gospel music year-round, except on Friday evenings in the fall, when listeners delight in hearing Will and his team share action-packed play-by-play coverage during the Cherokee County High School Football Game of the Week program.

Will is a Cherokee local who attended Creekview High School and has a love of all things sports. When he took on a social media internship with WLJA in 2018, he never imagined the spark it would ignite. At first his Friday nights consisted of filming sideline videos and posting score updates for broadcasters Michael Searcy and Dave Garner. Will recalls that about three games into the season, “as the game wrapped up, Dave looked at me and said, ‘Do you want to do the post-game show?’ I was pretty shocked, but I agreed. He handed me a headset and said ‘Okay, you’re on.’ And from there I never went back.” A few months later Will accepted his first radio job at a station in Rome. “After the 2018 season ended, I knew I wanted a career in broadcasting,” he says.

When football preparations began again at WLJA, sports director Dave was adamant that the booth needed Will, and he was more than happy to accept. Reflecting on Will’s role on the broadcast team, Dave says, “He reminds me a little of myself when I first entered into broadcast. I had some good mentors that coached me along the way, and I wanted to pay it forward. I’ve had the opportunity to work alongside some talented young broadcasters over the years, some of whom have advanced their careers into sizable markets. I see Will as easily being one of those who can take that next step to bigger and better things.” 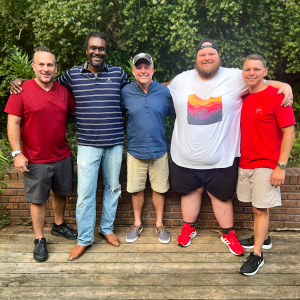 Since joining the on-air team, Will has helped expand the broadcast booth by adding a pre-season coaches show and a podcast—The Football Blitz—all while honing his skills. As he enters his fifth year, Will says the first game of the season still feels like Christmas morning.

Each game involves nearly thirty hours of prep work, including team research, film watching, and memorizing rosters. “It’s important to know players’ names and call them correctly. They may be playing for scholarships and using our broadcast in a highlight reel, and we have to give credit where credit is due. I consider it to be a responsibility.”

Will admits that his success has not been without blunders. “At my first official game of 2018, I hadn’t paid any attention to prep work. I simply printed rosters, highlighted the starters, and went to call the game, and I completely bombed.” He gives thanks to the support of his broadcast partners, who made all the difference. “The only reason I’ve been successful is because of the kindness and support of others in my circle. I’ve been grateful to have these guys who have built me up, given me opportunities, and been dependable.”

Will’s team recognizes his growth. As fellow broadcaster Dave notes, “Will has done a tremendous job of breaking into the business and becoming a true professional. There aren’t many young guys that are as polished so early in their career.”

With six Cherokee County teams to cover, the broadcast team chooses the top-matched game of each week throughout the season. It often includes highly anticipated rivalry games such as Woodstock versus Etowah, dubbed the Battle of Towne Lake. The Wolverines and Eagles will face off this season on October 14.

To hear your favorite games with Will Cooper, Arthur Mosley, Dave Garner, and Zakk Gross, tune in to WLJA 101.1 FM or stream on WLJAradio.com every Friday night starting at 6:30 p.m. 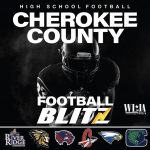 Check out the Cherokee County Football Blitz podcast with hosts Will and Arthur as they keep you up-to-date with everything you need to know about High School Football in Cherokee County. From game recaps and previews to coaches’ interviews, the guys will get you ready for the games every week. Available on Google Podcasts, Spotify, and anywhere you listen.