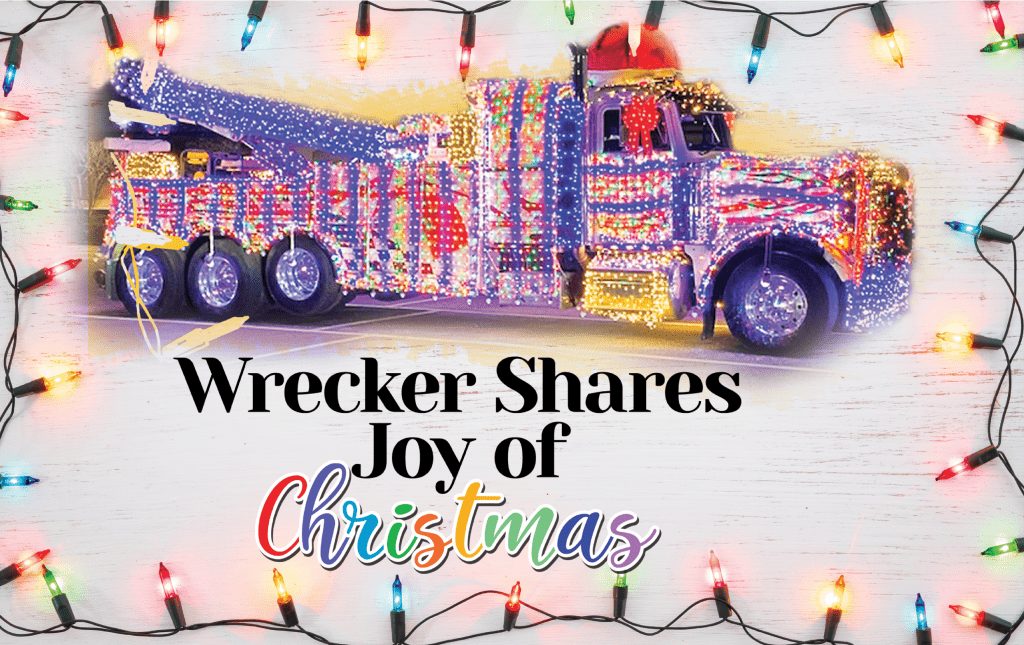 When the owners of Mauldin Body Shop in Canton take to the streets during the holiday season with their wrecker affectionally known as Christmas Pete, a crowd is sure to follow.

While the wrecker might be used most months of the year to help stranded motorists or tow a wrecked vehicle, during the Christmas season the tow truck spreads holiday joy.

Decked out with more than thirty thousand lights and playing holiday music, Christmas Pete is hard to miss, and catching a glimpse of the wrecker is a beloved Christmas tradition for young and old alike.

John Weaver and wife Debbie Mauldin Weaver love driving the wrecker through downtown Canton and along city streets, but stopping at one of the local shopping centers is the most rewarding part. The minute Christmas Pete comes to a stop, people rush over to get a photo with the decked-out tow truck. 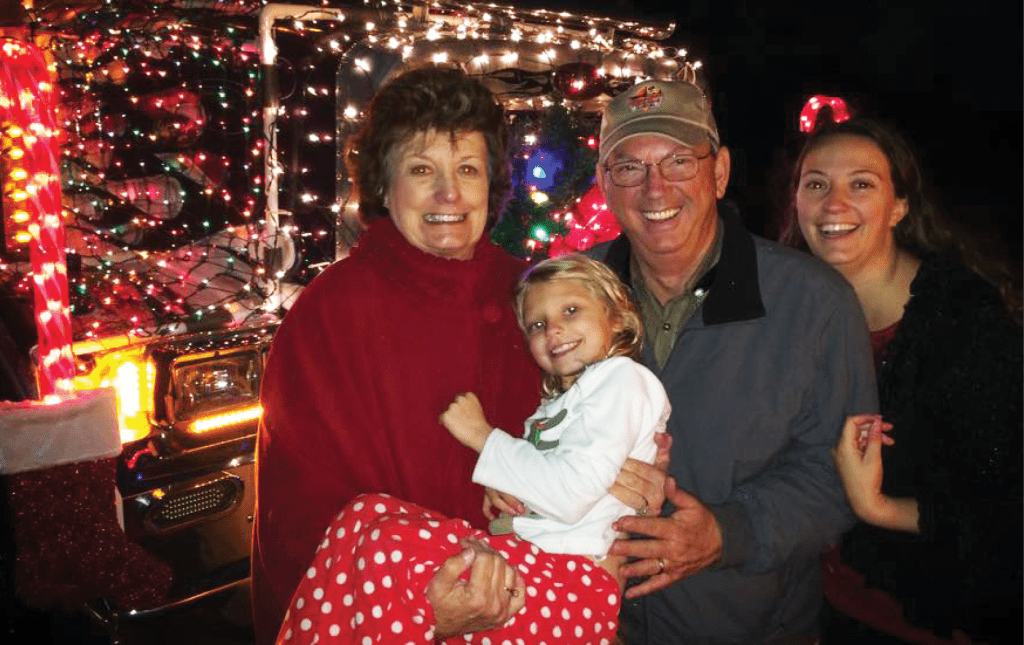 “We look forward to it all year round, because it does bring joy. It has become our real Christmas,” John describes of the experience. “That truck has come to be something almost unbelievable to us. Everyone loves it. It doesn’t matter if they are children or adults, they just brighten up when they see it.”

What is now an annual tradition started more than a decade ago when the couple decided to put a few lights on their Peterbilt wrecker and drive it in the local Christmas parade in downtown Canton. Each year more lights were added.

“After about two or three years of parades, I got the bright idea of building a frame out of PVC and put net lighting on it. After the end of the season I took it off and hung it up in the barn,” John explains with a chuckle.

“Now we have about thirty thousand lights and music with five-thousand-watt speakers on it. We love to take it through town. We have a good time.”

John grew up in downtown Canton in a large house where the Salty Mule restaurant is located today and remembers the lovely lights in the city that were so much a part of the holidays. John’s mother ran a boarding house in the old home.

“I lived there until I was eleven years old, and they tore the house down to build the Colonial Store. Back then Canton really decorated for the holidays. There was a fountain in the square, and it had lights shining on it that would turn from green to red. We could look up the street and see them,” he reminisces.

“All the stores had beautifully decorated windows and the lights were so pretty. It was a special time of year. Being there in town growing up with stores and decorations, I really enjoyed that and wanted to capture that feeling again,” he explains.

Just like at the body shop, which is now run by the couple’s daughter Angela Weaver Mayhue, decorating and taking out Christmas Pete is a family affair.

“We pull up to Belk or Target or wherever, and people just congregate. We just beam and enjoy how much people enjoy the experience,” John shares of the family’s nightly holiday outings. “We are so thankful to the city officials and the businesses. They don’t complain and seem grateful to us.”

Getting the tow truck ready to roll takes about a month, he says.

“We start decorating around November 1 and have it completely ready to go on Thanksgiving night. We hit the road and make the rounds. We try to go out every night, unless there is a bad rain. But even if it is raining some, people come out to see it and get their pictures,” he says with a smile.

Last year John and Debbie drove the decorated tow truck for an evening to the International Towing and Recovery Hall of Fame and Museum in Chattanooga, where the sight of Christmas Pete drew a constant crowd. In 2016 John was inducted into the Hall of Fame there and is now on the museum’s board of directors.

“God has blessed me so well. The year I was inducted was the one-hundredth year of towing. When they introduced me, Debbie was walking me up. They always give each inductee a number. Mine was John 316, and that held such a special meaning for me,” he relates of the experience.

Debbie’s father, Herbert Maudlin, founded the body shop and wrecker service in 1961 that still bears his name. In 1964 John and Debbie met in ninth grade at Cherokee High School, and before long they were a couple. John says that he and Debbie were sweethearts before they were allowed to date. Soon he was riding in the wrecker on evening emergency calls with his future father-in-law.

“I would be at her house, and her dad would get a call for a wrecker, and Debbie would punch me and whisper, ‘Tell him you want to go along.’ So I would ask if I could go on the call with him,” John shares. “Before long I would just go get in the truck when he got a call, and that is how it all started. I guess you could say I married into it.” 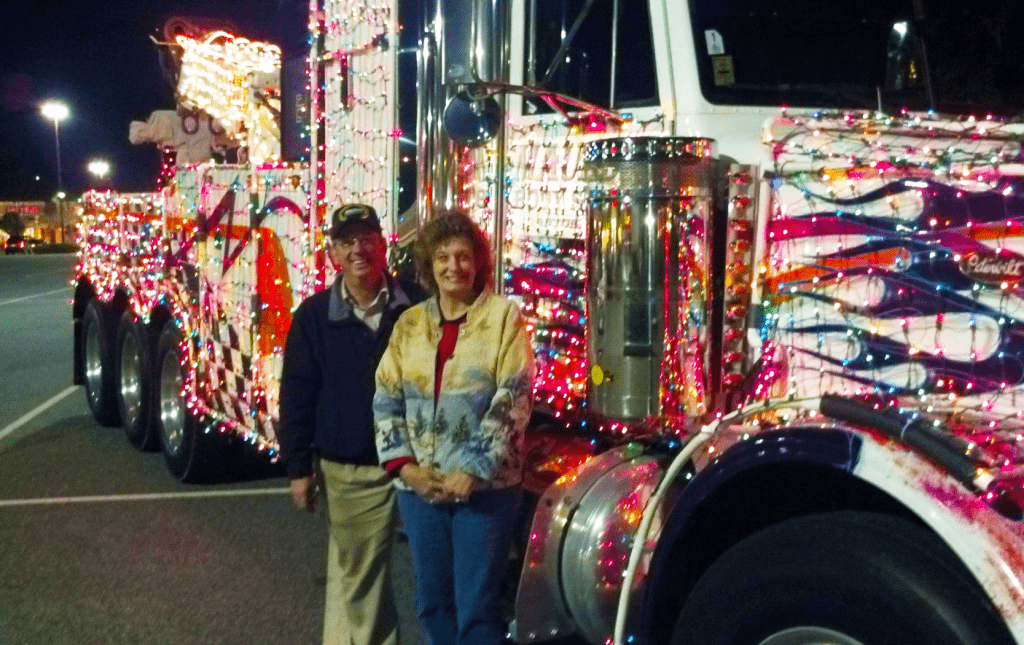 In 1970 the couple was married, just before John got out of the U.S. Army. John worked at WCHK radio station in Canton doing on-air news and sports from the time he was in the ninth grade until 1973. He remembers he would be at the Canton radio station at five a.m. and be on air at six a.m.

Shortly after leaving the radio station in the early 1970s, John took over the towing operation for Mauldin, and Debbie joined the business in the body shop.

While John enjoys looking back at the years of towing and working emergencies in Cherokee County and the surrounding area, these days he looks most forward to the holidays.

He says people come from as far away as Blue Ridge to see Christmas Pete. People call the wrecker dispatch to see where the tow truck will be each night between Thanksgiving and Christmas.

When asked what keeps him and his family motivated to spend the holidays out on the wrecker, he says it is the joy they see in others. “I think it is the fact that so many families will bring their kids and want to have a photo made with it. One woman called us and said her son had a disability and that he wanted to see it. He was about eight or ten. He had difficulty walking and had recently fallen and had a broken arm. He had his arm in a sling,” John remembers. John had recently hurt his arm and had his arm in a sling as well. The experience that night brought him to tears. “We have video of him dancing and going up to the lights with such joy. I cried so much that night. It was so special. He came over and hugged me, with both of us with our arms in our slings. I was balling. That was Christmas,” John emphasizes.

Christmas Pete does not have a theme, but each year the family adds more lights and decorations. John particularly likes the addition of a Christmas tree on the back of the truck and the way the boom is now wrapped in blue lights, which he says offers an inspirational message.

“When you wrap it and put the tree on it, there appears to be a cross behind the Christmas tree, and it just pops out that we could not have Christmas if we didn’t have a cross. It is an empty cross for our hope, and that should be our joy for Christmas. This is strictly for the joy of Christmas.”